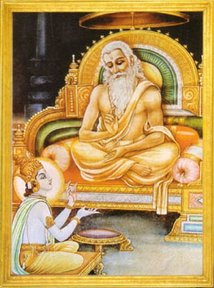 [Sage Vasishta points out to Rama the subtle difference between actually Knowing the Truth having obtained a clear understanding after a study of Non-dual Teaching and merely acquiring scholarly proficiency as an expert  and advises further on how a sincere seeker should proceed in the matter.  This discourse takes place in the 21st Canto of the Book II (Second Part) of the Chapter Nirvana in Yogavaasishta.  A slightly edited excerpt from “Yogavaasishta, Part VI” (by Shri K.V. Krishna Murthy, English rendering by Dr. Vemuri Ramesam, Avadhoota Datta Peetham, Mysore 570025, India, 2013, pp: 356) is presented below – ramesam.]

Rama:  Sir!  Who is a Knower of Truth and who is an Expert on Truth?

Sage Vasishta:  A man may study spiritual scriptures for gainful employment just as another may learn any of the worldly trades like sculpture etc.  A well-learned person may be able to explicate and analyze in detail what is Truth as he is undoubtedly highly knowledgeable;  but hardly does he ever try to practice what he learnt.  Such a person is the Expert on Truth.  Though he is acquainted with the subject of ‘Knowledge of Truth,’  his behavior and attitude do not, however, reveal any indication of this Knowledge.   Like the experts in other fields, he will be pre-occupied with gaining name, fame and wealth.  He may feign to be a highly learned man but really cares little about the Knowledge of Truth.

Let me also tell you, the only knowledge worthy of knowing is the Knowledge of Truth.  All other subjects of study are only imaginary knowledge – they are the virtual images of Truth like the reflections in a mirror.

Rama: Do you mean to suggest that only a perfect Knower of Truth is truly knowledgeable and the rest of the seekers are lowly Experts on Truth?

Sage Vasishta:  Yes, Seekers are mere experts on Truth. But they are not lowly.  What I said was about the pretentiously knowledgeable lot who never aspire for liberation.  It is such people who are the morons.  They are the inferior ones who really qualify to be called as the Experts on Truth.

There is yet one other category of ‘Experts on Truth.’   They are the ones who studied all the scriptures well but struggle in practical implementation. They keep efforting sometimes successfully and sometimes with failure.   They are the Pious Experts on Truth.   The term “Expert on Truth” connotes a different meaning in their case.  They are strongly bound to their knowledge.  They cannot be called ignorant persons, though they cannot be said to be true Knowers of Truth either, because of their attachment to Truth.  Such people do not get afflicted by temptations of pleasure.

Hence, a seeker should become first a Pious Expert on Truth. He should undertake only untainted jobs to procure his food.  He should consume food just enough to keep himself alive.   He should live only to know the Truth.  He should know only such Truth understanding of which will permanently redeem him from sorrow.   Such a man will soon be the ‘Knower of Truth.’

I shall narrate now the qualities of the Knower of Truth.

A Knower of Truth is one who –

[In the above definition, ‘gross things’ refer to the sensory percepts like sight, sound etc.  Subtle thing refers to the ‘inner organ’ (antah karana) which flows outwards through the sensory organs and gets modified into the form of objects that are perceived.  The effects of past actions are experienced as happiness and sorrow. ]

It is essential to be able to remain as a mere Witness-Consciousness in order to be able to reach the state of a ‘Knower of Truth.’  Jada Bharata and others could remain unaffected even though their bodies were being hacked away because they remained as mute Witnesses.

Ignorance is the main impediment in the achievement of such a state.  I-consciousness (ego) is the first trigger for the genesis of ignorance.   Then it gets sustained through the belief in the reality of the visible world.  The reality of the world gets reinforced from the cause – effect relationships like a seed turning into a sprout observed in the world.  But these causal relationships do not exist at the beginning of the creation or at the end of creation.  Nevertheless, common people believe that the world is real and develop feelings of ‘me and mine’ towards the world.

Everyone thinks “I am my body” and feels possessive about it.   How did he get the body?   It was in the form of a sperm in a male body.  The individual (jIva) in it thought that that form in the sperm to be himself.  After it went into the womb of its mother, it became a zygote. Then it turned to be an embryo and a globule.  Later it grew to be a mass of flesh.  It gradually attained the shape of a human being.  After it was delivered, it developed the body that one has now.   At every stage the individual (jIva) has been claiming, whatever form he was in, as ‘himself.’  But if we say now that “you were a mass of flesh or just a globule or a mere zygote” he will not agree.   That being the situation, what meaning can we give to the claim of ownership for the body he has now?   Even then, the man is unable to let go the I-consciousness.  That’s what ignorance is!

Ignorance and consequently the phantasm of the world is the result of being an ‘Expert on Truth.’  Freedom from this worldly phantasm is the outcome for a ‘Knower of Truth.’   In order to achieve liberation, one has to practice detachment.

[The picture of Sage Vasishta adopted from here.]