I tried to visualize the Advaita teaching using the Projector Metaphor. A slide is prepared based on that visualization.

Any corrections/suggestions for improvement will be gratefully appreciated. 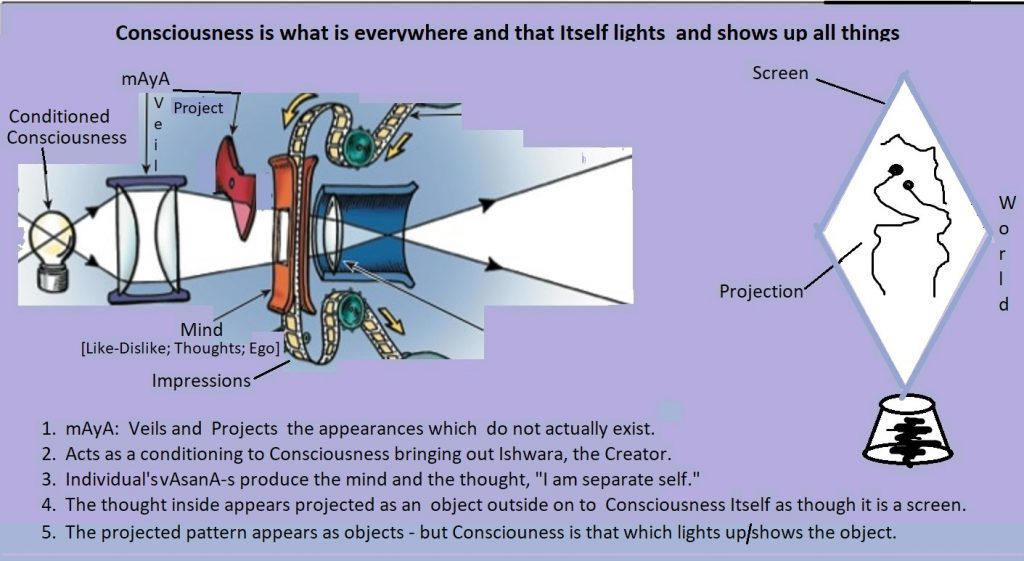 Shankara is very categorical in his observation that “Very rare is the person who attains discriminating wisdom. The ignorant don’t follow the man of Wisdom, because of their attachments and evil passions which necessarily lead to action.” He regrets that such people resort to even black magic. He adds that “Therefore, samsAra is only based on avidyA and exists only for the ignorant man who sees the world as it appears to him. Neither avidyA nor its effect pertains to Kshetrajna, pure and simple.”

Shankara says that, not only many of the common people, even some of the scholars (Experts in shAstra-s) fail to understand the essential message of the scripture. Proud of their knowledge in the Vedic rituals, they think that they are the doers (with a strong sense of a “me”) and believe they will attain great merit (as “mine”) in this life-time so that they can reap the fruits of their meritorious actions in the next world. They perceive their body, life-force, senses, and mind, but are unable to grasp their innermost Self (pratyagAtmA) which is the actual witness to all that they perceive. If they are able to recognize their inner Self, they will easily cognize the Supreme Self (paramAtmA) that is present everywhere and in everything. They will come to realize that their inner Self is not different from the Supreme Self.  As the Gita says,

sat-chit-Ananda is often used to describe that which ‘lies beyond’ description, Brahman.

sat is being, chit is consciousness, Ananda is bliss.

Is love there too? Kindness, empathy, compassion? Does enlightenment awaken these qualities?

7.  Self is The Knower of All Experiences:

Any feelings, like joys or sorrows, that we experience are not what we are. They are experienced by us. Everything is known by that one no-thing thing which is the Knower (Knowingness). It is we who experience even birth and death. After all, death does not experience its death, nor does birth experience its birth. Whatever experiences the birth and death cannot Itself be born nor can that die. Once we are able to clearly discriminate and understand this truth, we will stop identifying ourselves with the wrong entities like the body. Knowing clearly who we are, and abiding as that Knowledge is liberation from ignorance. Liberation is not something that we attain in some heavenly abode, a remote Vaikunta or Kailasha. Nor it is to be attained sometime in the future. It is right here and right now.

There is no separate self within us waiting to be liberated. Liberation is our very nature. Joys and sorrows are not our nature. That which comes (Agama) and goes (apAya) is not what we are. That which we perceive is not us. We perceive a thing only if it is different from us. What is inherent to us, what we are, namely the Self, cannot be perceived, nor is It something we can add on to nor can be gotten rid of. We are It, spacelike, all-pervasive, formless, and blemishless. END_OF_DOCUMENT_TOKEN_TO_BE_REPLACED

PB. I think the best words you can use to characterize reality are awareness/consciousness, existence/beingness, and bliss/love. However, I wouldn’t identify reality with consciousness, the other two concepts, or all three together. They are just the purest manifestations of reality that we can identify. True reality is not a thing or concept, it is beyond definition.

But yes, I would agree that neurons, electrons, etc. are phenomena of consciousness, as are these words and the bodies and minds that write them.

M. Metaphysical truth is sometimes called apperception, or direct supramental perception, and it is non-transferable. Nicholas of Cusa put it this way: “The highest wisdom is this, to know… how that which is unattainable may be reached or attained unattainably”. Metaphysics (philosophia prima, or first philosophy of medieval times) is not science, and its truths are often dressed as paradoxes, analogies, and metaphors; they are not meant to convince anyone who is not open to them.

A metaphysical truth appeals to intuition; it is an experience or knowledge-experience… It is not speculation and is not amenable to subject-object relationship or distinction.

END_OF_DOCUMENT_TOKEN_TO_BE_REPLACED

Q: When the jIva removes the ignorance of his real nature, and realizes Atman is his Real unchanging Self, if the body dissolves, what happens afterwards?

If there is no further birth, do we then remain as Absolute, without name and form, without knowing anything other than pure Self? Is it like space all being uniform without any form? Is there nothing that is known? Surely it doesn’t remain In an absolute ‘stateless state’ of no Knowing?

A: There have been a couple of questions around this before – see http://www.advaita.org.uk/discourses/q_and_a/q_and_a44.htm#q263 for example.

Your question is based on a misunderstanding. At the empirical level, there is indeed a ‘person’ who may or may not become enlightened. If he/she does gain Self-knowledge, then clearly the outlook of the person for the remainder of his/her ‘life’ is going to be different.

END_OF_DOCUMENT_TOKEN_TO_BE_REPLACED

5.  Discriminating the Self (Atma) from the not-Self (anAtma):

That which cannot perceive, but can become an object of perception is anAtma (not-Self). For example, our body is inert. It has no sense of “I am.” It cannot perceive anything. But our consciousness can perceive the body. Just as we perceive body and mind, we also perceive joys and sorrow, likes and dislikes.  The polar pairs of opposites like joy and sorrow, are also a result of our ignorance. Consciousness Itself is untouched by them.

Consciousness alone is Atma. Everything else in the world is insentient. Not only inanimate objects such as chairs and tables, but also our bodies, life-force, and senses are insentient. Movement does not imply sentience. Wind moves, but wind is insentient. The air around us, the light that travels through space, and the five fundamental elements are insentient. Only Awareness that can feel “I AM” is sentient. Every object is known to our Awareness, but no object is aware of its own being-ness. A tiny spark of Awareness that is aware of all the objects is within every one of us. It is the Inner-Self (pratyagAtma). END_OF_DOCUMENT_TOKEN_TO_BE_REPLACED

So today we think we are going to make this a better world in which to live, and we are going to save the world, and so on. The world has its own collective karma. It’s going through a phase. Your job is to save yourself. If you find yourself in a burning building, you do not stop to admire the pictures on the wall, you get out of the building as fast as you can. So, when you know you have a short time in this existence you do not stop to play the games of life, you try to find yourself and become free as fast as you can. END_OF_DOCUMENT_TOKEN_TO_BE_REPLACED

Ignorance is like a gossamer sheath that covers up and conceals our true Knowledge. An analogy may help. Think of a muslin cloth in which a few pieces of asafetida are kept wrapped in. The smell of asafetida lingers on the cloth even after the asafetida is consumed and the cloth is washed. Like the smell persisting on the cloth, impressions from the past experiences get stored in the causal body. Just like the smell of the asafetida that cannot be gotten rid of easily, the clinging impressions on the causal body too are difficult to be eliminated.  These lingering traces of the effects of past actions are called as the vAsanA-s. They get expressed as the desires in the mind, including the individual’s likes and dislikes, proclivities, etc.

We are all familiar with our gross physical body. It is available to our direct perception and it gives us our ID. Vedanta tells us that we are blessed with two more bodies — the subtle body comprising life-force, the mind and the intellect), and a totally imperceptible third body, subtler than the subtle body. It is called the causal body, the source of the other two bodies. Advaita Vedanta avers, as we all know, that what we truly are is Pure Consciousness. Consciousness is our nature. It is the very Self that knows “I AM.” It is not that the Self possesses Consciousness. Self is Consciousness. We are actually none of these bodies.

But for some unknown and indeterminate reason, the Self, instead of being the Subject, the Knower or the Seer, got contaminated. We superimposed the Self with the known and the seen, the objects.  We shifted our ID from being the Self to being a body – mostly as the gross physical body, but sometimes to be the subtle body. That is a great fall for the Self – from Self to not-Self. The strong association we experience with the three bodies stands as a proof of the apparent fall. The severity of the fall could have been far less had we considered the bodies to be “mine” instead of taking them to be “me,” and identifying ourselves with them as “I am my body.” END_OF_DOCUMENT_TOKEN_TO_BE_REPLACED