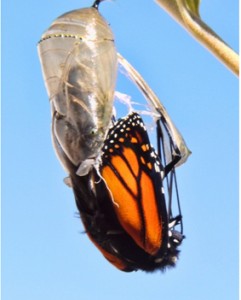 Internally, delusion causes error such as: ‘I am insecure, dependent, unhappy, limited, etc.’ These wrong notions are caused by lack of discriminative knowledge at the individual level. Externally it takes the form: ‘this universe is the source of happiness, it is responsible for my unhappiness, I am dependent on the universe, the universe will give me security, etc.’ (The universe includes friends, relatives, property etc).

How does the inability to discriminate between the seer and the seen causes saṃsāra? The veiling power of māyā covers the difference between Self and non-self, thereby there is lack of discriminative knowledge, because of which there is erroneous self-perception and we mistake Self for non-self, and thereby there is superimposition of all the limitations of non-self upon Self. There is no real superimposition – it is ‘as though’, just as a colourless crystal seems to have become red having borrowed the colour from the flower placed near it. Really speaking it is not possible for Self to borrow the limitations of non-self but, because of the close proximity, it seems that the attributes of non-self have become attributes of Self. That superimposition alone, the false transference of limitations and problems of non-self onto the Self, results in wrong notion about the Self.

Therefore the wrong notion causes a constant pressure in the mind that one wants to become free from limitations. If the notion ‘I am small’ is not there, then the notion ‘I want to be free from smallness’ is not possible. The wrong notion is because of false transference caused by lack of discriminative knowledge – there is no real transference. If the transference is real then it will impossible to change, you will have to be free for the rest of the life. Ahaṅkāra is the erroneous notion about the Self: I am small and inadequate. Ahaṅkara alone results in pressure to become bigger than what one is and, thereby, the fundamental desire rises: ‘I want to live long happily’. That fundamental desire alone results in all other desires.

In the third chapter of the Gītā, Bhagavān says: ‘As long as ignorance is there you will never be free from the hold of desires.’ Instead of trying to undo desire, try to understand what desire is, why desire exists. That is the only way you can free yourself from the hold of desire. Any desire is a symptom of the fundamental desire and when those desires impel you to action, you accumulate merit and demerit and there will be anger and jealousy and hatred and all other thoughts which results in another birth which involves further action with further fruit of action, which require another birth for their exhaustion. Like this it goes on and on. This is how lack of discriminative knowledge, caused by the veiling power of māyā, causes saṃsāra for an individual.

Externally, lack of discriminative knowledge covers the Brahman / mithyā difference. Therefore we mistake the mithyā universe for Reality and we look to the universe for security. Then we are disappointed and experience pain, which results in saṃsāra. The saṃsara caused by internal and external error will go with the ending of false transference of all the qualities of the satyam on the mithyā jagat and one’s dependence on the mithyā jagat ends. The pain of saṃsāra will go when you have can discriminate between Self and non-self and between Brahma and the universe.

When you see any opaque object, when you know the name and the form of the object, when there is cognition of the object, what you are invariably seeing at the same time is the light because, if there is no light, the object cannot be experienced. You are able to experience the object because you are experiencing light. There are two entities – light and the object – experienced together. When we ask, ‘How many objects are here?’ we count the number of objects and always miss out the light, without which the very coming to light of the objects is not possible. This is not because you are not experiencing light, but because you do not give adequate attention to the light. In fact you do not pay attention to the light at all: you only count the opaque objects, but minus this one thing, the light, whatever is there it would be as good as nonexistent as it is dependent on the light.

So how do we know how Brahman is? ….(To be continued)

3 thoughts on “Discovering oneself: Part 1/2”