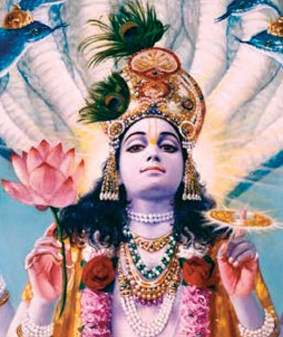 The most succinct description of the Gita is in the first verse of the ‘Meditation on the Gita’ traditionally recited before Chapter 1. It is a salutations to Bhagavad Gita, addressed as ‘Bhagavati, Amba’ (goddess, mother). This is what it says about her:
> She is revealed to Arjuna by the Supreme Lord himself.
> She is presented by the ancient sage Vyasa in eighteen chapters in the middle of the Mahābhārata.
> She is a shower of the nectar of non-duality that frees one from the root cause of unhappiness in life.

In the Mahābhārata epic, the 700 verses of the Gita are not preceded by this invocation, not are they divided into 18 chapters. An unknown author who composed the invocation has also added chapter titles and epilogue verses at the end of each chapter. These epilogues describe the Gita further:
> She has the status of an Upaniṣad, (the sacred teachings that lead to the realisation: ‘I am Supreme Sprit’).
> Her subject matter is knowledge of the Supreme Spirit.
> She is a yoga shāstra, a teaching that prepares the mind for self-knowledge.
> She is in the form of a dialogue between Lord Krishna and Warrior Prince Arjuna.

When I first came across the Gita I had no clue – or interest – concerning all of this and assumed, as most people do, that the text described a series of ‘yogas’ that lead to self-realisation. The word ‘yoga’ in the chapter titles of my translation was sometimes rendered as ‘path’ (Ch2: The Path of Knowledge), sometimes as ‘way’ (Ch5: The Way of Renunciation), sometimes left as ‘yoga’ (Ch3: Karma Yoga; Ch6: The Yoga of Meditation; Ch12: Bhakti Yoga) and left un-translated in the other titles. I would dip into the Gita here and there and pull out my favourite quotations at apposite moments when discussing matters spiritual. I never considered it to be one joined-up piece of advice.

Then one day, in a moment of insight, it became clear that this wasn’t merely some Indian historical narrative whose characters were ciphers to illustrate a moral message: the message had to be universal. If the teaching had any relevance today then the Gita characters were all aspects of one non-dual self, myself. The Krishna wisdom was my highest wisdom, it was addressed to the warrior part of me (battling in the field of dharma) and the dialogue was all taking place IN ME, not in a distant battlefield! That changed the picture.

I had some real questions at last. What was the nature of my despondency and unhappiness – not Arjuna’s? Do I understand what my higher self – not Krishna – is advising my despondent self? At the start of the text Arjuna (me) has a problem. By the end the doubts are resolved. What is heard in-between? And the problem, to be relevant, surely cannot be about killing relatives and friends because: if that’s the problem, then its solution has nothing to do with me. What’s the real problem?

The combination of these considerations with a belief that the Gita teaches the vision of non-duality that tolerates no difference, made me re-approach the Gita as if I’d never read it before.

Arjuna’s problem came to be seen as a common human problem: the ‘head-heart’ split. He knew that his duty (head) was to restore order in the kingdom but, with his feelings engaged (heart), he could not do the needful. That’s like us: we generally know what’s right but still often choose to follow our desires. If Arjuna had asked someone today what he needed to do, to follow his mind or his heart, it is likely that many would say: Follow your heart! But Krishna gives no such advice. If he had done so, the Gita would have been over by verse 11 of Chapter 2. Nor does Krishna say: Follow your head. He uses this opportunity to point out to Arjuna that the real Self is beyond such duality and is neither the doer nor the enjoyer. From the point of view of the Self there is thus no such choice as: shall I act or shall I retire to an ashram? From the point of view of the true Self there is no grief: the Self does not grieve or have fear or anxiety or confusion. So the Gita message is: transcend the dualities of head and heart by being your Self.

Krishna, however, then acknowledges that Arjuna’s emotional entanglements with family and friends is likely to come in the way of his transcending the dualities of head and heart, so he recommends the antidote: do your duty – but do it with a totally different attitude. The usual reason for doing things (or avoiding doing things) is the belief that the results of our actions will end our feeling of insecurity, incompleteness and unhappiness. So we do only things for ME, for my security, for my happiness!

The different attitude that Krishna recommends is to perform action with the additional aim of breaking the stranglehold of the twin drivers that control our lives: desire and aversion. How?

By saying: I am going to do the needful with discrimination and ethics, despite not wanting to, because ultimately no short term pleasure is worth it if the price is not being able to discover my true and substantial self. Surrendering to ‘what is’ is the same as surrendering to the Lord – not as a victim, but as a strong, detached person who assesses calmly before responding appropriately. Accepting the results as ‘what is’ is acknowledging that results are delivered by myriad universal laws that impact the situation: I am not the ultimate producer of the results of action, the universal law and order is.

Action with this new attitude is what’s called karma yoga. Karma means action. Yoga here means ‘conducive for a meditative disposition’. Karma yoga is the action that, by transcending the pulls of desire and aversion, makes the mind conducive for self-knowledge. Supporting this sort of action are practices that also make the mind calm and steady: yoga (as more than a keep-fit exercise), meditation, prayer, devotion to something higher than me and mine.

The result of this preparation is a mind that’s sharper, steadier and more receptive to the Gita wisdom. There are three obstacles to this wisdom: the first is unhelpful emotions for which, as we’ve seen, the antidote is karma yoga. The second is mental agitation, for which the antidote, as we have seen, is a worshipful, devotional mindset. The third is self-ignorance, for which the only antidote is self-knowledge – all rituals and other practices simply prepare the mind for this knowledge.

In fact, when Arjuna asks Krishna to be specific in his recommendation about what he should do he was told that there are only two committed lifestyles open to him: if he still had a sense that there were duties to perform and things to be done then he should adopt a karma yoga lifestyle. This means that all activities – not just occasional ones – should be conducted with the attitude described above. If, however, he was clear that self-knowledge was the only valid pursuit for him, then a contemplative monastic life was appropriate. And, just before Arjuna jumped to the conclusion that only life as a renunciate was valid for a spiritual person, Krishna reminded him of King Janaka who managed to run a kingdom and yet be clear about his true identity as Supreme Spirit. In fact Krishna offered himself as an example of a person totally engaged in activity (being Arjuna’s charioteer for example) but with a clear understanding that, as Limitless Existence-Consciousness Self, he was not the doer.

Many texts talk about the necessity for dispassion and discrimination as a pre-requisite for self-knowledge. The Gita is the only text to describe how a person living in the world can attain these qualities. Chapter by chapter it reveals the steps towards enlightenment like a scientific manual. Follow them like a good scientist and discover happiness that never fades and, like Arjuna at the end, declare: My doubts have been resolved!