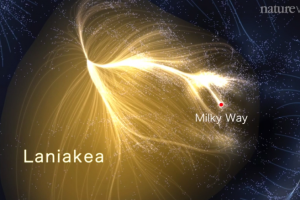 I wrote a Blog Post with the title “How Many Universes Make A Multiverse – The Story of Bhetala” inspired by a story narrated by Sage Vasishta in the first part of the Sixth Chapter: Nirvana in Yogavasishta. The Link to the Post dated Nov 4, 2009 is here. The metaphor described was as follows:

“Think of the universe that we are all living in to be a humongous fruit.

Another great man wears a necklace of a hundred thousand of Vishnus.
His name is Rudra.

Millions of Rudras shine in the form of hair-follicles on the body of a very great man. His name is Aditya (= one who has been there right from the beginning; sun).
He is none other than the Supreme Consciousness.

The star you are referring to is the Brahman with attributes.”

“The supercluster of galaxies that includes the Milky Way is 100 times bigger in volume and mass than previously thought, a team of astronomers says. They have mapped the enormous region and given it the name Laniakea — Hawaiian for ‘immeasurable heaven’.”

A Video of the Structure of the Universe can be seen here.

2 thoughts on “How Many Universes?”