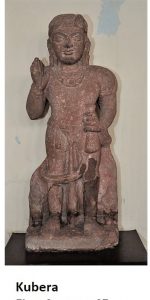 Lord Ishwara was holding court in Kailasha. His consort and both his sons were also seated with him. There were several nobles and other gods in attendance. The gurgling flow of the Ganges from the matted hair of the Lord and the chirping of the birds and other creatures around were sounding like a background drone reciting the name of Shiva-Shiva-Shiva. The God of Riches, Kubera, famous for his wealth, came to meet Ishwara. He bowed to the Lord and worshiped him as per the tradition. Kubera had a deep philosophical question and posed the same to Ishawara requesting the Lord to relieve him from the doubt.

Kubera: This entire world of tangible and intangible things is known and experienced through our sensory organs; we interact with the world using our motor organs. All these actions are possible only when our mind and intellect function along with the I-consciousness (ahamkAra) in a cause-and-effect relationship. Please tell me, My Lord, how am I to attain ‘That’ which is beyond these transitory worldly entities. How do I get to grasp the truly real substance which is Eternal?

Ishwara:  The answer is in your question itself, Kubera!

Unknowingly, you referred to the inescapable triad that is the characteristic of the world. You, as the knower, (pramAta), ask for  the means (pramANa) to know that which is Real (prameya). The observer-observing-the observed or the knower-knowledge-known is the typical form the triad takes. Whether it is a happy or unhappy situation, whether it is day-to-day activity or spiritual practice, the triad (tripuTi) is necessarily present in your worldly experience.

Kubera, take a step back and see who exactly is the one that cognizes these three elements of the tripuTi. It is that sense of ‘Me’ which is unchanging and unwavering within you. You are that very Witness-Consciousness that cognizes the three elements of the triad. Its nature is sat-cit-Ananda (Knowingness-Beingness-Infinity). It cannot be understood so long as you remain in or as the tripuTi. Know first how did the triad originate.

After all, the triad cannot create itself nor can it create you. You are the sentient self-illuminating Knower, the Self. Only the Self could have imagined (created) the triad. What the Self creates, however, is only apparitional (AbhAsa) and not real. Therefore, none of the elements within the triad can be an illuminator to show the others.

Consider for example the dreams. The triads within the dream are created by the dreamer. In fact, the dreamer did not create the various dream objects. He himself became those objects! So they are illusory (mithya). Being insentient, they cannot know the dreamer. Nor can a dream object illuminate another dream object. It is not dissimilar to the awake state – the awake world objects too cannot see one another; only you, as the Consciousness, know them.

Therefore, Kubera, only the Sentient you can cognize all ideas and objects (nAma = ideas; rUpa = objects) that constitute the world about which you talked about earlier. An outsider cannot know your Sentience. You are the Self of the nature of Beingness-Shine-Attractiveness (asti-bhAti-priyam) and only you are self-effulgent. The sweet, cool, liquid water is the “Self” for the waves, spume, foam, bubbles and spray. That being so, wouldn’t it be foolish for a wave to want to meet water which is said to be its ‘self’? It’s a shame to say that the all-knowing you want to know your Self which is asti-bhAti-priyam!

Kubera:  What are bondage and liberation?

Ishwara: They are both your egoic thoughts. When you identify yourself with a thought modulation of the form of bondage or freedom, you become that. They are not any substantive entities that I can tell you about!

Kubera:  How am I to be free from happiness and misery?

Ishwara:  You are the Witness-Consciousness of happiness and misery.  How can they affect you? Happiness and sorrow are the properties of the mind. Don’t take yourself to be the mind.

Kubera:  How do I control the mind?

Kubera:  When I do not exist, how can you exist? After all, only if ‘I’ am, there is scope for a ‘you’ to exist.  When a ‘me’ is not there, there cannot be heaven or hell; bondage or liberation; happiness or sorrow and so on. Everything is sat-cit-Ananda.

Ishwara: That is fine. Who are you then?

Kubera: I am of the nature of sat-cit-Ananda. Fuel-wood cannot remain as itself when in contact with fire. It transforms into fire. I am like the logwood. You are fire. I offer myself to you.

Ishwara: When there is fuel, only then can fire exist; when you yourself are not there, how can I be?

Hey, Kubera! When the ego-consciousness (the sense of a separate ‘me’) does not exist, where are you?

Kubera: (Remains silent as there is no more scope for speech).

Acknowledgements: The Post is a translation of a dialog in the Book by Swami Visuddhananda. The Picture of Kubera is that of a 1st Century statuette in Mathura Museum, adopted from Wikipedia.

4 thoughts on “Kubera’s Search for The Self:”