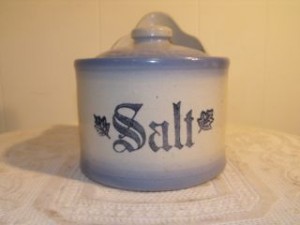 On the kitchen shelf of an apartment shared by students, there’s a colourful mixture of containers – a large box of teabags, a coffee tin, smaller jars with spices, a high glass with spaghetti, a blue and white saltshaker, a big muesli jar, etc.

The muesli jar squints at the glass with the spaghetti and sighs, feeling much too fat once again. But after a while, he realizes that the glass with the spaghetti is used a lot less frequently, which gives him a boost. Then he glances at the box with teabags, which is even more popular and moreover has an exotic design. His mood sinks. But luckily he remembers that actually the inner values count; he recognizes that he has a great variety of things to offer, exceeding all others, and he feels better immediately. But once he is placed back on the shelf, entirely empty after breakfast, the muesli jar falls into a deep depression.

This is what happens to anyone identifying himself with his form and who hence is only able to perceive others as forms. Even inner values are (subtle) forms. Any identification with forms leads to a continuous up and down in the mind.

The story of the saltshaker is interesting, because a few weeks ago, he slipped from someone’s hand and burst into pieces when he hit the floor. This had been a great shock to him, but allowed for a deep insight. He realized with a shock that he was neither his form nor his contents: with the bursting of his form and the loss of his contents, he had not disappeared, after all. When the earthenware walls burst, nothing changed, as a matter of fact! Evidently, at his core, he was “space”– limited by nothing. The space within the thick earthenware walls turned out to be non-separate from the space surrounding it.

A particularly frugal and creative resident had attended to the shards and glued together the saltshaker again. This is how he stood among the others now – slightly damaged from the outside, but inwardly freed from a fundamental identification. However, when a resident suggested throwing away the old saltshaker at last, he suddenly panicked – thus overlaying the actual insight for a brief period of time.

The emptied box with teabags ends up in the dustbin following breakfast. For the muesli jar, he has disappeared now. The saltshaker knows that merely the form bites the dust. It doesn’t matter to the box with teabags. He had neither been identified with the box, nor with the contents. He always knew that he is space untouched by the box space. Whether the form remains or goes, it doesn’t make a difference to him.

In this metaphor, the containers and their contents represent the body-mind-system of a person. Hence, the form of the containers stands for the body, the contents stand for thoughts/feelings.

What we tend normally to leave unconsidered is “space”. Besides the elements earth, water, fire and air, in Vedanta the 5th and most subtle element is space. Space is that which is everywhere and which permeates everything (the other elements as well[1]). The space within a form, which also permeates the contents of the form, stands for the true self in this story. This space is non-separate from space as such, i.e. from the space within as well as outside.

The space surrounding a container is not different from the space inside a container. If the container breaks, no interaction takes place between “the one” and “the other” space; there is no process of merging or the like. Space as such is one entity and since there is no other space, it is one.

This analogy demonstrates two things: on the one hand, it points to why a human being feels separated, and on the other hand it demonstrates that the self is identical with the whole.

A human being feels separated from everything else, because he identifies with his form (the body and the mental/emotional contents of his mind). Viewed from the angle of this form-identity, the human being perceives himself and the world as two things, hence dual. Only when he realizes that he is what permeates the body/mind and that he is formless has he the chance to recognize himself and the world as identical, hence as non-dual. The formless, all-permeating true self (Atman) is the same as the Self of the Whole (Brahman[2]).

Ayam atma brahma, this is what the Mandukya Upanishad says: Atman and Brahman are the same.

The relationship between space inside a container and space as such adequately demonstrates the relationship of Atman and Brahman (there isn’t any, because they are the same). But it is crucial not to take an analogy literally, because any analogy has its limitations:

[2] Brahman must not be confused with the Hindu deity Brahma, the creator.