It is about 40 days ago I had posted the first part posing what I thought would be questions that will interest many readers.

Shri Panigrahi and Shri Peter have been kind to respond giving their observations. I am grateful to them for their comments.

I do not know why there are not many more reactions. The reasons could vary from the reader profile, website personality to flippancy of the questions. But as you may have already anticipated, there cannot be ‘the one correct answer.’ There can only be  different views.  So without going into much elaboration, I shall spell out my thoughts for the answers.

But before I do so, one small point. Peter’s inspiring comments reminded me what I remember to have read way back several decades ago — a  commentary on Bhagavad-Gita by Apte of Pune. He interpreted the whole Kurukshetra fight  as a conflict in human mind.

He says that kuru kshetra stands for the field of action — that is the human body-mind.

The war is a conflict faced in our daily lives in decision making — what is right and what is evil action. It is a conflict between the good and dharmic forces on one hand and undesirable traits on the other. The state (rashtra)  is usurped (dhRta = unlawfully take control of). The evil forces have an umpteen number (hundred children + others) of supporters. Even worldly skills and knowledge (personified as Drona, an Acharya) side with the usurpers. So does the prideful ‘ego.’

Bhishma embodies ‘ego.’ The ego can’t be killed for, the killer then becomes the ego. The ego has to die its own death on the appointed day.

And so on it goes.  A really fascinating allegory.

Gita is a great hands-on-manual for ‘conflict resolution.’ Maybe some of the readers might have already known about this and hence I do not propose to stretch this theme.

Now my answers to the three Questions (without much ado and explanation):

1.  The normally chatty, questioning Arjun becomes totally silent while witnessing the Cosmic Form of Lord Krishna (Viswaruupa samdarshan in Chapter XI). It falls on Sanjay to describe the enchanting Cosmic Form.  Arjun finds his voice again only after Krishna withdraws His Cosmic Form and assumes the normal familiar personality.  Sage Vyasa, the author, could as well have made Arjun to describe what he saw. Why did the Sage choose to depict Arjun to be wordless while witnessing the Ultimate Reality?

A:  Mind is the seat of language. So an individual needs a mind for words to get expressed. Mind is dissolved in the  Brahman in the realization of the Supreme Self. Arjun could not speak when he was lost in Oneness because his individuating mind was dissolved. Hence his language capability is gone. Vyasa, the powerful story teller that he was, took care of this subtle point and hence made Sanjay to describe the situation.

2.  Related to the same Chapter, The Cosmic Form is shown to be highly scary, ‘red in tooth and claw’, chewing away people and gods, fires and flares oozing out of nostrils, stamping on and stomping the creatures. A Compassionate and kind, tender and loving, caring and caressing form of a benevolent godhead was not shown. Nor a calm and serenely quiet silvery waters blossoming with beautiful lotuses and round green leaves was presented. Why did Sage Vyasa choose to present the Ultimate, the God of Gods, the Pure Consciousness, in such a fierce and threatening form?

A:  The timing of the Kurukshetra battle coincided with the end of a yuga. The yuga ending is the time for Dissolution (pralaya). A pralaya takes place (as usually picturized in itihAsa-s) either by flooding or by fires (more so by fire, the Fire God being described as ‘sarvabhakshak’ (= consumer of everything).

Vyasa again shows his skills as a story teller in the depiction of the phase of Dissolution through fires (Krishna declares Kalo2ham). Had the event been taking place at the creation phase, I am pretty sure the scenario would have been a pleasant morning Sun rising, cuckoos cooing, flowers blossoming, fawns prancing and so on.

3.  In the ultimate understanding of Advaita, the world ‘as it is’ Is Brahman (isavaasya midagum sarvam, neha naanaasti kincana). World is not separate from Brahman. In other words, the world is the form that Brahman appears from moment to moment.

Why do the Non-duality teachers add the phrase ‘from moment to moment’ for the historyless (time invariant) immutable Brahman?

A:  (In answering this question I shall assume that the reader is quite familiar with the intricacies of Advaita siddhanta. If any further queries come up, I shall answer them as and when raised).

For ease of communication of my ‘view’, I shall resort to a metaphor. I shall call it, “The Throb in the Blob Metaphor.”

The Throb in the Blob Metaphor:

Imagine a homogeneous isotropic indivisible infinite shapeless Blob that has awareness. Say a small throb occurs somewhere within it. The throb is a movement. It  is like a ripple with a rise and a fall. Any movement can happen only in space. Movement also takes time. So along with the throb, space and time are engendered.

As the Blob looks through the movement (i.e. The Blob being aware, is aware of itself), variegated, colorful and multiple shapes appear, much like the one uniform white light passing through a prism gets refracted into multicolored spectrum. (Remember all this is taking place somewhere within the Blob itself). 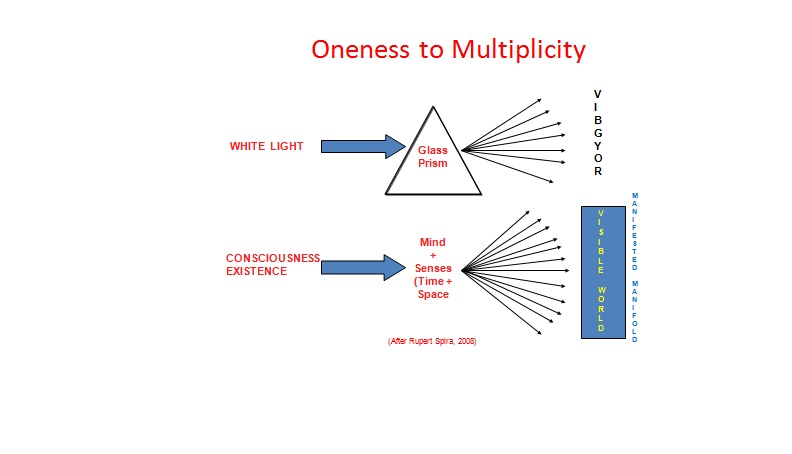 In the above metaphor, the Blob is Brahman; the throb is a thought; and the colorful spectrum is the world.

The moment the throb (thought) rises, so does the world. The moment thought dissolves, the world too ends. Hence the appearance of the world happens  from moment to moment. 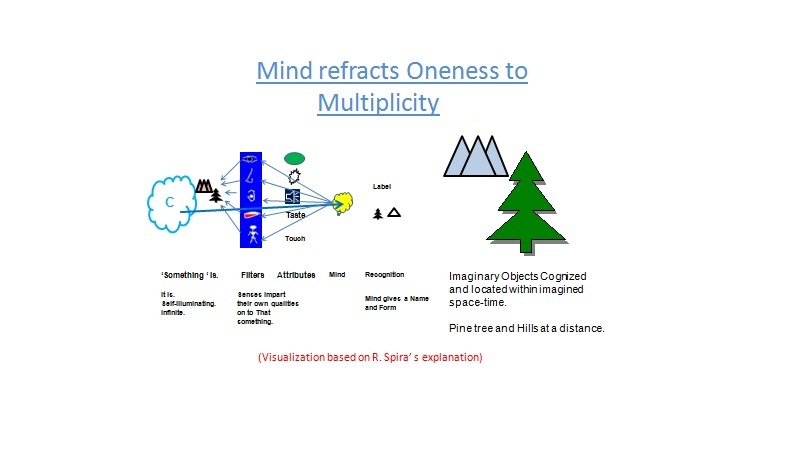 Visualization based on R. Spira, 2008

If you are unconvinced, well, the fault lies in my expression but not in the model.

2 thoughts on “QUESTIONS NOT RAISED OR ANSWERED – Part 2”