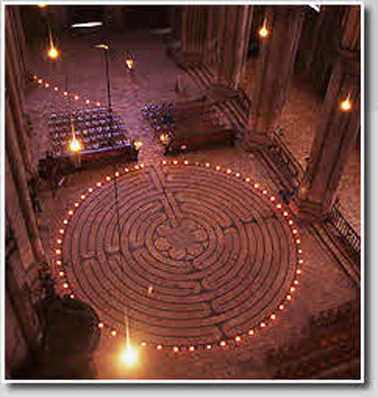 We live in turbulent times. And, when there’s turbulence, insecurity increases, and with the increase of insecurity neediness and desperation follow. The needy and desperate are ripe for exploitation. A school teaching ‘practical philosophy’ in London observes that in economically buoyant times the numbers walking though their doors drops, but when the economy gets tougher the numbers joining their classes shoot up.

Recently I bumped into people from this school promoting silence and contemplation by inviting people to walk through a labyrinth (based on the one in Chartres Cathedral) chalked in the courtyard of a church in the heart of London’s West End. Adults were very serious about being calm in following the instruction, but looked clumsy when ‘disturbed’, especially when those on the inward journey encountered those returning on the narrow chalked pathway – who should give way? Should one smile or maintain composure? If one speaks would one be disturbing the other or breaking the spell? Kids, on the other hand, just ran through the labyrinth with squeals of delight as they encountered sharp bends and jumped around like gazelles to avoid obstacles.

This sounds reminiscent of what used to happen at Chartres itself: ‘… it is also recorded around 1650 that visitors to the cathedral would noisily walk and run around the labyrinth, even during services, much to the annoyance of the Canon of Chartres at the time, who refers to it as “…only a crazy amusement at which those who have nothing better to do pass the time running and turning…” An engraving of the nave of the cathedral from 1696 likewise shows fashionable ladies and gentlemen of the day walking the labyrinth, seemingly more as a social gathering, rather than as any form of spiritual practice.’ (http://www.labyrinthos.net/chartresfaq.html Photo ©: Jeff Saward/Labyrinthos)

There’s money in neediness and desperation too. As is well known, more people became seriously wealthy during the gold rush by selling pick axes, mules, pans, liquor, food supplies, dancing girls than the far fewer who became wealthy from striking gold. Also, anyone who has follows the writings of James Schwartz will hear tell of how only recently did walking round Arunachala become massively popular and, in the wake of its popularity, a whole spiritual circus sprang up in Thiruvannamalai – nothing better than a touch of the exotic to spice up the ‘spiritual’ adventure.

Here’s a description I was sent of what is about to descend on the ‘sacred mountain’:

“We are all looking forward to Deepam, which is the biggest holy festival in Tiruvannamalai. There are four or five ancient wooden chariots that are pulled around the town by the local men. These wooden chariots are roughly 6-7 meters high, ornately carved rather like miniature gopurams themselves. It will be full moon on 8th December – (Deepam) – and several hundred thousand people will flood into Tiruvannamalai from all around the country, many of them making special religious pilgrimages by coach, culminating in this pradakshina around the sacred mountain Arunnachala. Around 6-6.15 pm on the 8th Dec. a huge Vat of Ghee which has been donated by many well wishers is taken up the mountain to the very summit where it is ceremoniously lit to the great delight of all the onlookers. Fireworks, music, and general merriment then follow which is accompanied by much good will that is passed on as people wish each other “Happy Deepam”. All Shiva worshipers will be celebrating the Fire aspect of Shiva (The mountain Arunachala) on this special day by lighting oil lamps in and around their houses and places of work.

“We will walk around the mountain on this special full moon celebration. We will also have oil lamps placed on the walls of our roof terrace during the night. Keep your fingers crossed that it is a dry night. Hopefully we shall take some pictures and if they look good I will email them to you.”

In all of this, the self-enquiry enjoined by Ramana is totally irrelevant. The real and only reason for coming to Thiruvannamalai is no more. The expectation of an experience by ‘doers’ makes the job of some of the more unscrupulous ‘gurus’ easier: it’s relatively easy to invoke  ‘spiritual’ ‘experiences’ in those who badly wish for them and are therefore susceptible and suggestible. (No doubt seekers may be genuine, but not all ‘gurus’ are.)

There are other charismatic ‘gurus’ who build emotional dependency in their followers. There are still others who spin an aura of authenticity by quoting from scripture, but somehow miss the point. One such teacher I knew used to say that each time he went away for a week-long retreat to study and meditate, he would return to find that his company had won a new client. In this way he equated scripture study with material wealth. The dangers of such people are picked out for special mention by Krishna in the Bhagavad Gita Chapter 2:

O Arjuna, those non-discriminating people who are attached to the result-giving karmas enjoined by the Veda, arguing that there is nothing other than this, who are full of desires, who have heaven as their highest goal, utter, for the attainment of pleasure and power, flowery words that speak of many special rituals that offer better births and fruits of action. (v42-43)

Here are extracts from Swami Dayananda’s commentary on these ‘gurus’ from his Gita Home Study books:

“Therefore, these are not ordinary people. They are people who have studied scripture and who believe in its validity. They are the people who are not to be dismissed because they have studied the scriptures. Śaṅkara criticises them here because they have all the words and some arguments which they back-up by quoting selected verses. They talk, argue, and try to convince others. They use very well-known words, words that are very flowery.

“As you hear the words, they are very pleasing and wonderful to the ear, but in fact, they are all just so much hype! Such words are used because people who do not have single-mindedness, who have not ascertained what they have to accomplish in life, do not see things very clearly. Those, who do not have this discrimination, revel in parts of the Veda that talk of means and ends and exclude the Vedānta portion.

“…They also talk about this life, saying that the greatest gain is wealth. In other words, the goal is one hundred percent success here and in the hereafter also! This is how they talk. And why do they talk this way?

“…Not only are they themselves carried away by these words, their conviction in their belief is such that they become missionaries and make sure they convince a few other people too. The real reason for their missionary zeal is that they are not that sure. Their belief is only a belief, after all. Believers have to become missionaries because belief means there is a doubt and doubt means you require some strength. If you can manage to convince one person, then you feel secure. There is mutual strength and one helps the other. Groups are created in this way so that each member will have the support of all other members.”

One might say: so what? At least they are making people think about scripture. What’s the harm? In response, here are Krishna’s words:

For those who pursue, pleasure and power exclusively, whose minds are robbed away by those flowery words, well-ascertained understanding does not take place in their mind. (v44)

And Swami Dayananda’s commentary on them:

“The minds of those who are carried away by these enticing flowery words do not stay with the pursuit of Vedānta. With reference to what one must gain, there is no real clarity because this clarity cannot take place in the minds carried away by such words. The idea here is that if you do not allow yourself to be carried away by words, if you look into them, you will find that they fall apart. And, if the words are not looked into, you will find that they are very pleasing and attractive. Therefore, people who have no discrimination are easily carried off by them.

“…Those who are totally engaged in the pursuit of enjoyment and power alone, are influenced by the flowery words that reveal the various types of karmas, the means for achieving different ends. These words are not only Vedic words but colloquial words also, drawn from whatever ‘hype’ that is available in the language at the time. Hearing these flowery words, which are very seductive, their minds are robbed away. In such people, the discriminative knowledge is so totally covered that nothing is clear.”

Some people mange to break free from the grip of such people. Others make the break but not so freely. They feel totally cheated and exploited when they realize how misleading the teachers were. They might have started off with good intentions, but end up rejecting anything that smacks of spirituality and shun anyone who purports to be a teacher. Now that is a sad loss. And it is a great sin to steal away a person’s thirst for truth.