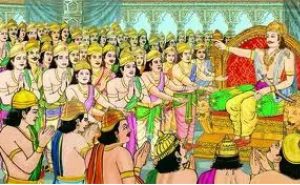 Ha, finally, a gentle streak of relief seems to have descended on to the faces of the assembled august Audience, sitting on the edge of their seats for hours with knotted foreheads, wide-open eyes and mouths, waiting in tension for the next onslaught of verbal missiles. None in the Royal Assembly could answer the final question of the Challenger and that decided what was at stake for the day. The fierce war of words seems to have come to a close when the well-statured Pundit, an embodiment of Knowledge Supreme, just began to take slow and steady steps, along with a horde of his disciples, followers and admirers, towards the exit door of the Royal Court. The gathered experts started to wipe the drops of sweat on their bald pates, foreheads and chest using their upper garment as a hand towel. Rolls of murmurs and exchanges opened up among small groups of the men, cascading into unclear sounds. Some people were talking within themselves or speaking to nobody in particular as they recapitulated the dense moments and the profound depths of the discussions.

The Emperor, along with his retinue has already left the throne and disappeared behind the heavily ornamented silk screens. The servants, in their regal wear befitting the status of the Empire, are furiously busy in leading the departing nobility, placing their respective padukas (wooden slippers) with great humility in front of their feet, as if they were making an offering to the gods. In the meanwhile another battery of Royal attendants busied themselves in readying the one 1000 well-built and healthy unblemished cows whose horns are covered with golden crowns and have pouches filled with tingling gold coins in red silk bags hanging from them. The winner in the debate got them all. It was perhaps equivalent to 10 trillion $ in modern days. There was, however, only one casualty and everyone felt that it was a redemption for that suffering jIva inside that body. So no regrets.

What was the question that nobody could answer and what is the answer? The question was about the “root” from which everything “originates.” The scripture only could provide an answer and Shankara untangles and explicates it for our sake.