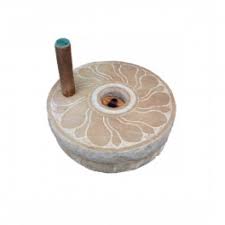 This is a household grinding machine called a ‘Chaki’, made of stone.  It has two parts:an upper plate and a lower plate. The upper plate is rotated over the stationary lower plate with the help of a handle fixed at its periphery.

While the grain is poured by one hand, the upper plate is rotated by the other hand with the help of the handle. The grain is pressed between the plates and is ground and powdered. After some time, the upper plate is removed and the grain powder is collected from the surface of the lower plate along with the powder which has come out through the gap between the plates in the course of manual grinding.

The chaki was a common sight in Indian households; no more now. Though physically out of sight, it has left a lasting imprint on the Indian mind because of its  metaphorical association with some Hindi couplets conveying deep meanings related to life and living.

Kabirdas, a saint ( 14th/15th century AD ), was a follower of the Nirguna tradition. He compares the two plates of the chaki with sky and earth encompassing the world and the human suffering in the world to the grinding of  the grain between the plates. No grain escapes the grinding as long as it is between the plates. The way out or escape from suffering is in the next couplet.

Everyone speaks of the grinding machine and no one speaks of the axis (vertical rod). While the grains between the plates are being pressed and ground, those attached/stuck to the axis are completely unhurt and remain intact. What is conveyed is this: the axis is the God. Man is born in the world (between the plates) and is suffering. However, those who are attached to the God (axis) escape suffering and are unhurt.

I have attempted a Vedantic perspective as below:

The Axis is stationary, doing no action, very much like Vedantic Self. However, It supports all worldly actions between the plates. Without the Axis, everything is a non-starter. Though not involved in the worldly affairs, It is, as it were, Witness to the worldly affairs.  A man who is attached to the Witness escapes worldly suffering and is ever happy since happiness is an aspect of the Witness (Self).