(K3.31 – K.32) Everything that we perceive, we perceive through the senses; everything that we ‘know’, we know through the mind. Consciousness functions through the mind – the concept known as chidAbhAsa, explained in Appendix 3. When the mind is inactive – for example, in deep sleep or under anesthetic – we are conscious of nothing. It is the mind that effectively imposes duality on the non-dual. We see the forms and, by naming them, it is as if we create separate things where there is really only brahman. Once this apparent duality is imposed, all of the negative emotions of desire, fear, attachment, anger and the rest follow. It is the mistaking of the really non-dual as dual that brings into existence all of our problems, which Advaita summarizes as saMsAra.

Having recognized that it is the mind that is the effective source of our problems, it is only natural to conclude that, by somehow ‘getting rid of’ the mind, we will solve those problems. This is the concept called manonAsha, which found favor with Ramana Maharshi in particular, who is claimed to have stated that this should be the aim of the seeker. (manas refers to mind in general; nAsha means loss, destruction, annihilation, death.) Once we have ‘destroyed the mind’, it is said, there will be no more duality.

END_OF_DOCUMENT_TOKEN_TO_BE_REPLACED

Q: My question is one I can’t seem to clarify through any book, teacher or teaching:

How do we know that the brain isn’t responsible for consciousness? While we can observe mind with all of it’s contents as objects and then say we cannot be that which we observe, how can we be sure that there is not just some part of the brain which does the observing that is giving us this ability to watch thought? How does Vedanta address this? How can we know that the brain isn’t simply the one observing all phenomena?

Side note: I lost consciousness once due to a fall and blacked out, and all I can say is that there was complete absence of being and no one there to be aware of the non-beingness. No observer nor observed. Beyond no-thing. Absolutely no experience beyond the concept of the word. END_OF_DOCUMENT_TOKEN_TO_BE_REPLACED 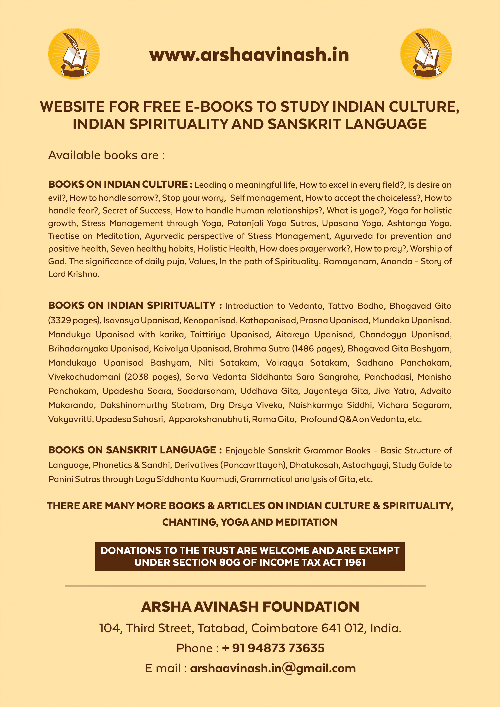 (Extract from the book)

What exactly happens when a person is enlightened or ‘gains mokSha’?  A popular, although somewhat incomprehensible, belief is that the world somehow ‘disappears’; that, for the j~nAnI, there simply is no longer any duality. Quite how the j~nAnI (apparently) continues to eat, drink and converse is not adequately explained by those who hold such a view. But Gaudapada approaches it from a different and even more dramatic angle.

Prior to my enlightenment, I make the mistake of identifying myself with the body-mind, believing myself to be a separate entity. This is the result of my Self-ignorance – not realizing that I am the unlimited Atman. Gaudapada says that this ignorance is beginningless (anAdi) (K1.16). At the dawn of Self-knowledge, I recognize that I am not the waker, dreamer or deep-sleeper but the non-dual turIya.

As to whether or not the world then disappears, Gaudapada effectively asks: how can it disappear when it didn’t exist to begin with? “If the visible world actually existed, there is no doubt that it might stop (i.e. disappear) (as soon as j~nAna was gained). (But) this (apparent) duality is merely mAyA (and) the absolute truth is non-dual.” (K1.17) END_OF_DOCUMENT_TOKEN_TO_BE_REPLACED

Since I have been receiving rather a lot of spam communications originating from the site, I have spent most of today attempting to revise contact forms, bolster ‘captcha’ methods, etc.

This should not affect existing visitors and only improve the experience for new visitors. However, one major decision I have just implemented is to remove the ‘Subscribe’ facility. The original intention of having a ‘subscription’ was so that regular newsletters could be sent out to members. This only happened a few times. Peter Bonnici was to have been responsible for this but sadly died. Accordingly, the only function of this facility now is to authenticate those visitors who wish to post articles or comment on existing ones. (I’m not sure if you need to be registered in order to comment.)

Most of the people registered as ‘subsribers’ have never posted or commented. Accordingly, I have now deleted all of these. (If I have removed someone who does comment or was intending imminently to do so, and you can no longer do so, please accept my apology and contact me immediately!)

The procedure now if you want to post articles is to contact me via the ‘Contact Us’ link at the bottom of the home page. This also applies if you just want to comment and find that you are not allowed. I will then manually enter your details as a subscriber or contributor. Apologies if this causes anyone any inconvenience.

After the two long discussions on this fascinating topic, I would like to offer the following as my final word on the subject (hopefully!):

The world is brahman – sarvam khalvidam brahma. So we can say that the cause of the world is brahman (and shruti does say this!). The cause is not ignorance. It is because of ignorance that we see the world as separate objects and people but that is not the same thing. Yes, we superimpose ‘things’ upon the non-dual reality. That is adhyAsa. But that is not the ‘cause’ of the world. Ignorance is absence of knowledge and the world could not arise from an ‘absence’ or nothing. Brahman is the cause and, for the sake of ‘explanation’ we posit that it does so via the power of mAyA. Even so, the world is nothing other than Brahman, since Brahman is both material and efficient cause.

Ignorance is not the cause of the world; it is the reason that we fail to realize that the world is Brahman. When that ignorance is removed, the realization dawns; but since it had nothing to do with the appearance, the world does not disappear when the ignorance goes. If the (appearance of the) world had not been there to begin with there would have been nothing for us to superimpose upon. It was and remains mithyA – dependent upon Brahman for its reality. When we gain Self-knowledge, what goes away is the ignorance, not the world.

A favorite topic on the Advaitin discussion group (http://groups.yahoo.com/group/Advaitin/) (where I am one of the moderators) has been what exactly happens when a person is enlightened or ‘gains mokSha’.  A popular, although somewhat incomprehensible, belief is that the world somehow ‘disappears’; that, for the j~nAnI, there simply is no longer any duality. Quite how the j~nAnI (apparently) continues to eat, drink and converse is not adequately explained by those who hold such a view. But Gaudapada approaches it from a different and even more dramatic angle. END_OF_DOCUMENT_TOKEN_TO_BE_REPLACED

There are 3 states of consciousness – waking, dream and deep sleep and none of them are ‘really real’. Waking seems to be real for the waker. The dream is equally real for the dreamer (who thinks he is a waker)! The true reality is the Consciousness that is the basis of all 3 states. Waking life is said to be like a dream so that you can use this as a metaphor for gaining enlightenment. END_OF_DOCUMENT_TOKEN_TO_BE_REPLACED

According to Monier-Williams (Ref. 179), the word ‘rAhu’ means ‘the Seizer’. It refers to a story in the Hindu purana-s (sacred books of mythology and cosmology), although the myth also occurs in much older Buddhist texts. The fable has the gods ‘churning’ the ocean in order to extract the ‘nectar of immortality’ (amRRita). One of the demons who are watching this, disguises himself, steals a portion and drinks it, thereby becoming immortal too. The sun and moon gods witnessed this and told Vishnu, who subsequently cut off the demon’s head. The head became known as rAhu and the rest of the body (with the tail of a dragon) as ketu. They were then evicted from the earth, from where rAhu continually tries to wreak revenge on the sun and moon by eating (‘seizing’) them. We see these attempts when eclipses take place. END_OF_DOCUMENT_TOKEN_TO_BE_REPLACED