Here is an article I was asked to write recently for my publisher’s blog. It discusses my approach to writing about Advaita, with particular emphasis on my last book, ‘A-U-M: Awakening to Reaility’. It also touches upon that perennially thorny issue – experience versus knowledge! 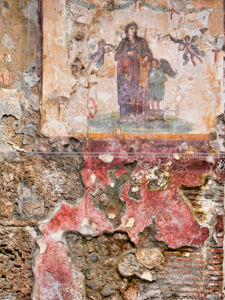 A philosophically-inclined wit once inquired into the difference between having God speak to one in a dream and dreaming about God. This metaphysical query is the basis of this article on Mind-Body-Spirit books in general and my own writing in particular.

Let’s assume for a moment that I am a ‘successful’ author (by which I mean that I have written books that are acknowledged as ‘worthy’ rather than that I have made much money from the pursuit!) There are effectively two elements to this success:
A) being able to write, and
B) being knowledgeable about the subject-matter of the books.

If I am deemed to have achieved those accomplishments, what were the principal factors?

Three elements have influenced this: a deprived childhood, an enquiring mind and a good education. By ‘deprived’ here, I mean ‘socially deprived’. There were no other children of my age in the neighbourhood. I had to provide my own entertainment. This was mainly achieved by reading around 3 books per week from the library throughout most of my childhood and adolescence. Mostly SF, I concede, but I also graduated to some traditional and modern classics as well as a little non-fiction. This had the effect of developing a wide vocabulary (I always looked up new words in the dictionary) and an appreciation of how to put those words together in an interesting and informative manner.

This academic style of leisure activity both supported and enhanced my education and my attitude to it, so that I gained a scholarship to a prestigious school. There, I was obliged to study Latin. Although I did not at all appreciate it at the time, this provided an understanding of the underlying structure of words and the importance of correct grammar.

On leaving university, having spent the previous 10 years specialising in Chemistry, I got a job as a computer programmer. Some years later, I discovered that I had a hitherto unrealised skill for explaining difficult concepts, when I was asked to write a manual to explain the functioning of the software in a complex telecommunications system. Provided that I could fully understand the intricacies myself, I found that I was able to break things down into their fundamental elements and document this knowledge in such a way as to educate others. But, in order to reach that stage, I had to sit down with the authors of the software and get them to explain to me all of the interactions and functions until I understood everything for myself. This was an absolute requirement!

I also have my education to blame for this aspect, to some degree. Since it was an all-male school, in addition to the woeful social skills that I had gathered earlier, my ability to interact with the alien female of the species was virtually non-existent. This shortcoming significantly helped to bring about my general dissatisfaction with life and engendered an interest in philosophy and matters spiritual, to try to fathom some meaning and purpose.

I floundered for some years in the mass of miscellaneous material available before I finally became aware of Advaita. Again, it took some years even to find out what exactly this was about, since there was (and still is to some extent) a dearth of books on the subject.

Having decided that I sincerely wanted to understand this teaching, I soon discovered that there is actually only one process for achieving this. Shankara, who is the principal historical teacher of Advaita and responsible for making it more generally available in around the 8th century CE, states it as follows: Listen to the teaching (from someone who is qualified to give it); ask questions to remove all doubts; dwell on what you have learned until it is completely assimilated.

This poses an immediate problem: how does one find a ‘suitably qualified’ teacher? Such a person has to know the scriptures inside out, understand Sanskrit, and (most importantly) be able to explain it to a ‘suitably qualified’ seeker. This level of knowledge is really only available to someone who has studied for a long time with another, already-qualified teacher. I have received emails from seekers all over the world asking if I can recommend a good teacher in their area. I am rarely able to oblige. If you live in India, there is no problem. If you live in one of the major cities of the civilised world, there is a possibility. Others have only two choices: relocate or resort to reading and the Internet, as I had to do.

Writing about ‘spiritual’ matters is fraught with language problems. Many authors in the MBS category are presumably attempting to communicate their ‘experiences’ of whatever topic they write about. I say ‘presumably’ because I freely admit that I have not read any of those books that claim to use extrasensory means of acquiring information, whether from angels or crystals or any other source. This is not because I believe such books are entirely fictional. But, even if they are based on what the writer believes to be fact, it is simply not possible to communicate experience in an unambiguous manner. Experience is ultimately ineffable; only masters of fiction write about it with any degree of success.

To some degree, even ‘objective’ data suffer from these problems. After all, unless we are talking about the axiomatic or mathematically defined, even physical ‘facts’ are observer dependent or relative to the frame of reference. Attributes of objects depend upon the nature and acuity of the senses that perceive them, as well as on individual prior knowledge and experience. Thus it is that anyone attempting to describe or teach a system of philosophy needs to tread very carefully, as it were, when they speak or write.

I actually began my first book, ‘The Book of One’, in a similar spirit to that with which I had approached the Technical Manual; I wanted to reach that level of understanding with respect to the teaching of Advaita. And the process was the same – read extensively, ask lots of questions of others more knowledgeable than me. I began in relative ignorance but acquired more and more understanding as I continued. I often encountered views that were mistaken, maybe because the writer was still following a similar path. But, over time, the correct views were reinforced by constant repetition from different sources and the erroneous ideas were discarded. There was the constant need to be alert to the dangers, cross-referencing every new source against previously read material, looking for reinforcing or contradictory views, and always exercising doubt and reason to question and validate new information.

The vast amount of research I conducted on ‘Book of One’ enabled me subsequently to write ‘Back to the Truth’, since I had collected hundreds of excellent references from other sources. This process has been the cornerstone of all of my books. ‘A-U-M – Awakening to Reality’ is an exposition of a book I had read some 25 years earlier. I recognised its importance at the time but was quite unable to understand it, or to find anyone who could explain it to me. In researching it, I acquired virtually every book (in English) that had been written, including several that had extremely low print runs in India. And I listened to hundreds of hours of talks from acknowledged experts. The annotated bibliography in the book runs to 34 pages.

Without such background research, discovering the truth from those who already know it, it is impossible to write books such as these in other than a cynical manner. Of course, there are those who are perfectly aware that what they write is little better than fiction, but their livelihood depends upon persuading others through their books and lectures. Some may genuinely delude themselves also but there will always be complete charlatans in any field.

The advice I would give to any seeker-of-truth, whether via a proven path such as Traditional Advaita or via some of the more recent, questionable paths is as follows. Only accept and give credence to books that provide knowledge that seems to be authentic, and which include lots of references that can be checked. Such books must also not be contrary to reason and need to provide convincing arguments if they are to change one’s views. If a book is constantly saying ‘this is what I have found’, ‘I believe’, ‘it has been my experience’ etc – by all means read it (if you must) but take all that is said with a large pinch of salt and look for a book that does not rely on such tactics. Remember the premise of this article: Experience equips one to write fiction; knowledge equips one to write non-fiction.

41 thoughts on “Dreaming of God”