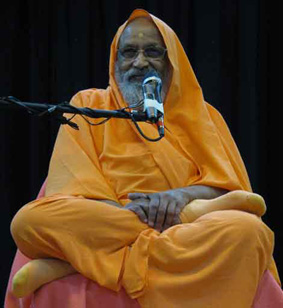 “His Holiness, Jagadguru Shankaracharya, Dakshinam Naya, Sri Shringeri Sharada Pitham, Sri Sri Bharati Tirtha Mahaswamiji is pleased to confer the Adi Shankaracharya Award on Sri Swami Dayananda Saraswati, Arsha Vidya Gurukulam, in recognition of the exemplary service rendered for the sustenance and propagation of Sanatana Dharma, Advaita philosophy, the Hindu cause and the welfare of mankind.”

I was struck by the speech from last year’s ceremony. It is a praise of Adi Shankara, but from my knowledge of Swami Dayananda Saraswati, it could be a description of his qualities:

Rough translation (please excuse if there are errors):
“It is quite difficult to attain competence in learning and committing the Veda to memory, even more so discern their meaning with clarity. Among those who have these two abilities, it is still more difficult to find one who has the capability to compose prose and poetry with elegance. Still if a few such are to be found with these three abilities, the possibility that they are of good character, with devotion towards the Lord, and of a forgiving nature, is miniscule. However, all these four characteristics were expressed playfully in their full glory with Bhagavatpaada.”