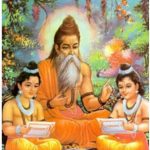 The Upanishads are the records of the “Knowledge” gained by the supremely dedicated Sages and Seers in the distant times through their incisive questioning and unbiased inquiry. They are written in the idiom and style of the day, at the same time taking a great care to see that the purity and pristine nature of the message is preserved for the posterity without getting mutilated by the passage of time. Hence, access to them was highly restricted. Their wording is very cryptic, symbolical and often too profound to be apparent to a casual reader. The Knowledge Itself, however, does not come with any tags of intellectual property rights or authorship claims. But expounding the real meaning of the text (called as ‘mantras’) demands expertise in many auxiliary fields like logic (nyAya), grammar(vyAkaraNa), prosody (chandas), orthology (nirukta) and linguistics in addition to a familiarity of the cultural milieu of the times. The Upanishads were transmitted orally to a closed group of eligible and committed students either by a father to son or teacher to disciple tradition. This method of imparting the Upanishadic Knowledge is known as sampradAya. In the absence of a Guru explicating them, it is impossible to make sense of them or understand clearly the meaning in-depth. Prakashananada’s interpretation of the svetaswatara Upanishad mantra IV – 5 following a dialectical approach of taking the thesis of the opponent and then providing its rebuttal to establish the eka jIva vAda typically illustrates the point made above. It is presented here as a conversation between an opponent and Swami Prakashananda Saraswati.

(Meaning: There is one unborn (avidyA) − red, white and black − which (appears to) gives birth to many creatures like itself. An unborn (jIvA) becomes attached to it and enjoys it. The unborn (jIva) transcends that (avidyA) which in reality is different from him.

The meaning of the first word in the above mantra is “the one, unborn.” It doesn’t tell explicitly who or what that ‘one’ is.

So the opponent immediately raises a question.

Opponent (O): “Well, how can you say this mantra talks about avidyA, as it is not mentioned here at all!”

PrakAshAnanda (P): “Yes, the word avidyA itself is not there. But the word अजां (ajAM) is in the feminine gender. Therefore, it refers to avidyA only.”

O:  “How can avidyA be one only and not many?

P:  “The avidyA is indicated to be one only by the use of the adjective ekAm. Further, it is said to have the ability to create.”

O:  “How can you say that? The multiplicity of jIvA-s is available for common experience.”

P:  “The oneness is well-known because of the interjection ‘hi.’

[The sub-commentator explains that PrakAshAnanda is saying that the fact that there is only one jIva is well known through Upanishad sentences such as:

(Being the One, the Universal pervades all beings. Though one, It is seen as many);

The logical argument presented here is that both the conditioning element (avidyA) and what is being reflected within it, viz,. brahman are (each)  one only. Therefore, jIva is also one only.

Thus, it gets established that there is only one jIva.

The dialogue, however, continues between Prakashananda and the Opponent as follows:

P: (Quoting Upanishad): “The jIva will be as though asleep when he is in the grip of avidyA for, avidyA obscures his intellect. Being deluded thus, he experiences the same avidyA, now in the form of products, the objects of sense perception – and like a dreamer, he becomes a samsarI, an experiencer of his own ignorance in the form of external objects.”

O:  “If avidyA is beginningless (because the Upanishad says it is aja (unborn), it follows that it is endless too. If it cannot be ended, the entire moksha shAstra is useless.”

P:  “But the Upanishad also says that the Self-Knowledge that is directly understood from mahAvAkya sentences will allow the jIva to transcend this avidyA.”

O:  “If avidyA has to be anyway rejected, why did brahman manifest it at all?”

P: “Because the mantra says bhuktabhogAm. It is for experiencing. From the standpoint of the Self, the utility of avidyA is rejected and then jIva transcends (jahAti) avidyA.

O:  “By definition, the jIva includes avidyA. In other words, avidyA is inherent in the nature of jIva. How then can the jIva ever transcend it?

P:  “The Upanishad negates that avidyA is the nature of the jIva, by the use of the term anya (“other”)

What it means is that the nature of the unborn one, i.e.  jIva, is different from avidyA. avidyA is not inherent in jIva‘s nature. The attributes of the AvaraNa (the covering) do not belong to what it encloses. avidyA is inert by nature, whereas the jIva is a conscious entity.

[Acknowledgements:  The above Post is an adaptation using material from the first reference which was kindly made available by Shri Venkataraghavan. His article on ‘Shankara and DSV’ brings much clarity to the topic. Further, he has been kind to correct and vet the draft version of the present post. I am obliged for his help and support. I thank Shri Venkat too for the nudge he provided in shriveling my disinclination in posting this write up. The figure appearing at the top left is from:  http://www.yogananda.com.au/upa/Upanishads01.html ]