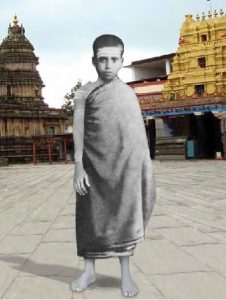 The highly revered Sringeri Pitham in India, as is well-known to all, is the sterling center devoutly upholding, preserving, maintaining and propagating the Shankara Advaita. The unbroken succession of the Pontiffs right from the time Shankara established the Matha to date has many a jIvanmukta in its line embellishing the holy precincts of the Ashram. Their exemplary lives illustrate the way one attains liberation while in life (jIvanmukti) and provide answers to many of the doubts a seeker may have in his/her quest to freedom from the bondage in samsAra.

I wish to post here a few excerpts from the life of Shri Abhinava Vidyateertha who opted at a tender age of 13 to live in the Ashram, renounced the world as a teenager,  attained liberation even before he studied all the scriptures and went on to become the 35th Pontiff  heading the Matha for 35 years (1954 to 1989). The source is the recently digitally published 1040 pages book titled “The Multifaceted JIvanmukta – His Holiness Jagadguru Sri Abinava VidyatIrtha Mahaswamin,” 2017.

His Holiness Śrī Abhinava Vidyātīrtha Mahāsvāmin [is] the 35th Jagadguru Shankaracharya of the Sringeri Sri Sharada Peetham in the unbroken line of Gurus headed by Śaṅkara-bhagavatpāda.

[Śrī Candraśekhara Bhāratī ], His Guru told Him, “I will tell you a simple method that will help you to start any meditation that you wish to do. During meditation, there is no need for you to use a rosary. Instead of straightaway picturing a devatā in your heart, first direct your gaze to the middle of your eyebrows. While doing so, you could chant a mantra, such as ‘om’.” Demonstrating the method, the senior Jagadguru focused His eyes on the space between His brows and remained thus for a few moments. He then said, “Turning the eyes upwards can well be done with the eyelids partially closed. I have found this to be more convenient, but equally effective. You will experience a tingling sensation between the brows. After you mentally apprehend a light in that region for some time, picture the divine form that you wish to meditate on. Then focus on that form. You may, when you feel like it, use this method even in connection with the visualisation of a form during your usual japa.

[Ch 10 of the book describes meditations of different types adopted by His Holiness.]

After sitting down at His meditation spot on the summit of the hill around 4:30 p.m., He pondered as follows.

“Thoughts of objects and the ‘I’ thought arise in the mind and highlight objects and the agent respectively. Happiness, sorrow and the like too are only mental modifications as are the  transformations of the mind in the form of external objects. The agent and the ‘I’ thought are relatively fundamental and not characterised by the great diversity of the thoughts of objects. Nonetheless, even agency and the sense of ‘I’ pertain to the mind and not to the Ātman. The Ātman is pure consciousness and is ever changeless. Being of this kind, the Ātman can neither be the mind nor be affected in any way by the mind.

Yet, having falsely identified the Ātman with the mind, one deems oneself to be an agent and treats as valid notions such as, ‘I see this,’ ‘This is mine,’ ‘I am happy’ and ‘I am unhappy.’ Decidedly, only right knowledge can annul ignorance and misunderstanding.”

He recalled that on the preceding evening He had voluntarily thought of His true nature as discerned by Him in the light of the scripture and corroborative reasoning and retained that notion; and that, fortunately, no other thought had cropped up and impaired His meditation. At this juncture, it struck Him that like using a thorn to remove a thorn that has pierced one’s sole, He could as well use even unwanted mental activity as a means to direct His attention to the Ātman. As regards this, He reasoned as follows.

“Per se, the Ātman is objectless, absolute consciousness and is none other than brahman. With respect to the ‘I’ thought as also other thoughts, It is their witness. Hence, instead of giving importance to any thought that arises or actively quelling it, I could contemplate on the Ātman as being the witness of that thought. The thought would then serve as a pointer to the Ātman rather than as a distracter. If I stand back from a thought as a disinterested witness, the thought would be deprived of stimulation and should soon die out. Hence, my using a thought to turn to the Ātman ought not to have the undesirable consequence of making the thought persist. It is not as though the meditation would grind to a halt when the mind becomes completely still. This is because my aim is not to watch thoughts but to abide as the Ātman, which shines on Its own without any dependence on the mind.”

He thought in this fashion for two or three minutes. To try out what He had planned, He needed some thought in the mind in the early phase of His meditation. However, His mind was simply not given to wandering during meditation. So, He decided that instead of voluntarily generating some thought, He would employ His eagerness to meditate without delay as the requisite prop. He reasoned that just as when one eats, one’s desire to have a meal becomes quieted, the desire to meditate would automatically disappear with His engaging in meditation and, so, He would just not be faced with the problem of the thought persisting.

He affirmed to Himself that He was pure consciousness unlimited by space, time and objects and started His meditation. He skipped the step of directing His gaze to the space between the brows and allowing a hue to be apprehended there, for He wanted to make immediate use of the desire to meditate that He had willingly entertained at that time. He experienced no difficulty in initiating contemplation on the Ātman as the witness of this desire. Almost immediately thereafter, the mental activity serving as the object vanished. An essentially isolated ‘I’ thought remained. He maintained the attitude of being a witness characterized by pure, unlimited consciousness. Very soon, even the sense of ‘I’ almost completely faded away. The mind was then quite still and no effort was needed to keep it so. Consciousness shone clearly without any object and without limitations. He was overwhelmed by bliss, which was far greater than on the previous evening. The awareness of any distinction between the bliss and Himself was almost absent. About an hour passed thus but He was totally oblivious of the passage of time. As He emerged from His first experience of savikalpasamādhi on the formless Reality, He gradually became aware of the body.

When He opened His eyes, He noticed that it was about half an hour before sunset.

[O]n 12th December 1935, corresponding to mārgaśira-kṛṇa-dvitīya, He went into nirvikalpa-samādhi in the morning and in the afternoon for an hour each. The conviction about the falsity of duality and of His being of the nature of changeless consciousness was so strong and steady that almost no avidyā-based notions of the non-Ātman cropped up. Those few that did were neutralized swiftly. The knowledge that Brahman alone is all had almost fully fructified. This was His state when He went in the evening to the summit of the hill one and a half hours before sunset, which was to occur at 6:03 p.m.

He directed His gaze to between the brows. Then, without any premeditation, He mentally chanted not just ‘om’ but “oṁ namaḥ śivāya”, as He had done a week earlier on the day He beheld the Lord and received the advice to focus on the formless Supreme Reality. Soon, He beheld a moon-like disc of light between His brows, as had happened a week earlier. His mind became increasingly quiet. The sense of ‘I’ faded away and, effortlessly, nirvikalpa-samādhi ensued. When He opened His eyes, the sun was about to set. Two birds were seated on His shoulders.

That Brahman is all was as clear to Him as a fruit in one’s palm. A few minutes later, even as His eyes were open, His mind automatically went into nirvikalpa-samādhi once again. He remained in that state for nearly an hour. As He regained awareness of the body and the surroundings, a big monkey bounded up to Him and positioned itself on His lap. After being cuddled for a while by Him, it left.

He walked down the hill and found His attendant, who had not accompanied Him up the hill that day, waiting there with a lamp, as had happened a week earlier. He had now attained direct realization of Brahman and jīvanmukti (liberation even while living), characterized by firm establishment in Brahman. The Lord’s earlier words to Him, “acireṇa brahmasaṁstho bhaviṣyasi (You shall soon become established in Brahman)” had found complete fulfillment.

When His Holiness was returning from the hill on the evening of mārgaśira-kṛṣṇa-dvitīyā, corresponding to 12th December, after attaining enlightenment and jīvanmukti (liberation even while living), He saw His Guru standing outside Sacchidananda Vilas and looking in His direction. The senior Jagadguru beckoned to Him and went inside. When He went to the room of His Guru, the latter, who was standing there, rushed to Him and embraced Him even before His Holiness could prostrate before His Guru or say anything.

Holding Him by His shoulders, the senior Jagadguru said, “I am so very happy.” He then voiced a mantra of the Muṇḍaka-upaniṣad, a passage of the Bṛhadāraṇyaka-upaniṣad and a verse of the Bhagavadgītā, all of which are about an enlightened person, a jīvanmukta (one liberated even while alive).

The import of that mantra is, “When the supreme Ātman, which is both high and low, is realised, the knot of the heart (comprising the host of tendencies and impressions of ignorance in the form of desires) is destroyed, all doubts come to an end and one’s actions become dissipated.” The cited passage of the Bṛhadāraṇyaka-upaniṣad conveys, “He who was subject to death then becomes deathless and attains identity with Brahman while living in this very body.” The import of cited words of the Lord
is, “But that man who rejoices only in the Ātman, is satisfied with just the Ātman and who is contented in just the Ātman – for him, there is no duty to perform.”

On the senior Jagadguru letting go of His shoulders, His Holiness prostrated before His Guru for long, placing His hands and head on His Guru’s feet. Recapitulating all this in August 1989, His Holiness told me, “Such was my Guru’s greatness that He highly appreciated anything positive in another. His instructions, blessings and grace were responsible for my sādhanā and whatever I achieved. Yet, He was so thoroughly free from egoism that He did not take any credit. Where can one find anyone like Him?”

As His Holiness had become fully enlightened and attained jīvanmukti that evening, samādhi ceased to have any role in His case as an aid to realise Brahman. However, as He had been repeatedly abiding in nirvikalpa-samādhi since the evening of 10th December, ‘nirodha-saṁskāras (impressions stemming from the interception of the mind)’ had become intense. Because of this and utter indifference to names and forms, His mind subsided readily and went on its own into nirvikalpa-samādhi. Such abidance in samādhi made His mind even further disposed to reposing in nirvikalpa-samādhi and disinclined towards everything else. That night, no sooner did He lie down than He went into nirvikalpa-samādhi. By the time He emerged from it, the night had passed.