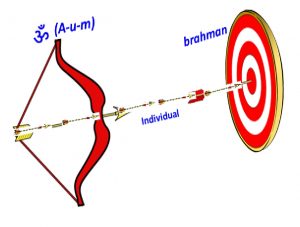 [Note:  Dennis posted at the other thread a cryptic comment that says, “… whether self-enquiry can reveal the true self. If you say it can, then what is the pramANa?”  My response to it has become too long and because I expect that there could be questions or more comments  on my comment, I have taken the liberty to make my comment into a separate Post.]

The remark that was recently posted by Dennis hinting that vicAra cannot possibly be a valid  means for Self-realization leaves one rather nonplussed. It, at one stroke, blunts the entire approach of jnAna mArga, which is a highly valued and respected method for liberation in Shankara tradition. Or in order not to make that statement invalid, one has to force oneself to assign a very narrow meaning to the word pramANa conforming to the concept that the author has in his mind rather than what is understood to be a pramANa in scriptural literature.

Shankara observes in his commentary on the mantra, II-ii-1, taittirIya,  that starts with ब्रह्मविदाप्नोति परम् as follows:

Meaning: The puruSha is able to have intelligent perception because the Universal Consciousness has manifested in him. He has the capacity to speak, he can think of the future, distinguish between good and bad, and try to achieve immortality, although born in a world of mortals.

So man has the basic ability to choose a process for Self-realization as he has  the motivation to be free, and is endowed with necessary tools, such as a suitable body, sensory organs, life-force, mind, and intellect to pursue liberation. This is a unique gift of the nature that only a human being, unlike other creatures  in nature, is blessed with. Hence a seeker endowed with a relatively more mature and ready mind can follow a direct path of enquiry for Self-realization as Gaudapada tells us in his kArikA .

Shankara in his Commentary on Bhagavad Gita, Ch 4, verse 18 says:

Therefore, adding loads of darkness in the form of cumbersome procedures to existing ignorance would only result in much denser darkness. Likewise, if a seeker is expected to follow  more and more involved action-centered instructions, he gets deeper and deeper into the mire of ignorance and bondage.

kena Upanishad, I-6 tells us:

[Meaning: What none can comprehend with the mind, but by which, the Sages say, the mind is comprehended, know that alone as brahman. brahman is not this which people worship.]

So brahman is not a thing to be ‘conceptualized’ and adored, deified or reified and It cannot be approached with some processes that are circumscribed with expectations.

Ancient seers acknowledged that the true path to liberation lies through only  Knowledge-based approach.  We have from Garuda Purana (http://www.sacred-texts.com/hin/gpu/gpu18.htm#page_154):

(Direct Knowledge of the Truth is the cause of liberation.).

Further, it is asserted in the verses at 87-88: “There is no liberation by the study of the Vedas, nor by the reading of the Śāstras. Emancipation is by knowledge alone, not otherwise, O son of Vinatā.”

Two phrases make for bondage and liberation: “Mine” and “Not-mine.” The being saying “Mine” is bound; saying “Not-mine” is released — verses 93-94.

The muNDaka mantra II-ii-4 gives us a clue for an approach to comprehend brahman directly:

Meaning: Om is the bow; the individual is the arrow; and Brahman is called its target. It is to be hit by an unerring man. One should become one with It just like an arrow.

Unlike the progressive methods where the seeker still retains a sense of “doership,” the vastutantra approach drops the ‘doership’ right at the start, thus directly accessing the vastu, brahman like an arrow hitting the target straight.

After telling us the nature of brahman in the first part, kena upaniShad opens the second part with the mantra:

[Meaning:  (The Teacher says to the seeker,) “You know very little of brahman’s form, if you think ‘I know it well.’ What you know of brahman among the gods is also very little. Therefore, the nature of brahman is still to be investigated by you.]

So how does the seeker proceed heeding the advice of the teacher?
He proceeds further with “vicAra” (मीमांस्यमेव = by inquiry only).

From the subsequent mantras of the Upanishad, i.e. after further inquiry, we find that the student “knows” and understands brahman.

So it is difficult to agree when one holds that “inquiry” will not take the seeker to understand brahman.

“pramANa” is defined as the one that is the means (medium or instrument) that provides “prama” or knowledge. The Knowledge we are interested here is Self-knowledge.

Shankara very clearly emphasizes that the “vastujnAna” (Knowledge of brahman) can be obtained by “inquiry alone” in his short treatise, vivekacUDAmaNi.

Krishna, the personification of Consciousness Itself, considered to be the jagadguru (Teacher for the entire Universe), expresses with great emphasis:

[Meaning:  Not by Vedas, nor by austerity, nor by gifts, nor by sacrifice, can “I” be seen in this Form as thou hast seen Me.]

Explaining this Shankara writes in his Commentary (भाष्यम्):

na vedaih —  not through the Vedas, not even through the four Vedas-Rk, Yajus, Sama and Atharvan;

na tapas — not by austerity, not by severe austerities like the Candrayana;

ijyayA — by sacrifices or worship;

evamvidhah — in this form, in the manner as was shown;

dRShTavAn asi — you have seen

Introducing the next verse Shankara asks the question, कथं पुनः शक्यः इति उच्यते — “How can You  be seen?”:

Meaning:  But by undistracted bhakti can- I, of this Form, be known and seen in reality, and entered into, Arjuna!

By bhakti alone, Krishna says, that He can be seen.

But how do we understand what true “bhakti” is?

Shankara does not disappoint us. He defines bhakti very unambiguously in vivekacUDAmaNi:

bhakti is “Contemplation of one’s own Real Nature .”

Obviously, it is again unmistakably, “vicAra.”

If one is still left with a doubt, here is another famous and highly revered text of Shankara. He teaches “Knowledge Path” in this text. He says:

[Knowledge is not brought about by any other means than “vicAra,”  just as an object is nowhere perceived without the help of illumination.]

If one asks the question “ how should be  the “inquiry” conducted,” he answers:

[Who am I? How is this world created? Who is the creator? With what material the world is made? Thus is the way the inquiry has to go on.]

Thus it establishes that “Who Am I” inquiry is not a new method discovered by someone in the 20th century. It is an age old method in the true “sampradAya,” or at least for one who has respect for an unbroken teacher-disciple lineage right from pre-Shankara times. (The inquiry question “Who am I?” appears as the starting point in more texts (perhaps in “anu gIta” too (?)). But that makes the subject for another post.

If one were to keep his/her eyes closed to all the available evidence, or insist that it is not found in the specific text of his preference or  takes a stand that the  wording is not as per his preference, well, I can only say, Sorry.

10 thoughts on “jnAna through vicAra”