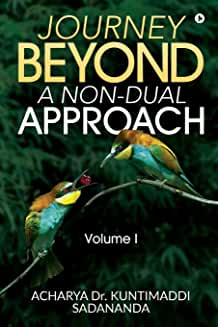 Everyone is searching for happiness that is everlasting. Yet, none can find it by any pursuit; at the same time none can stop the pursuit. This seems to be the tragedy of human life; nay the life of every being. Every pursuit is limited: space-wise, time-wise and object-wise. Any pursuit that is limited cannot give everlasting happiness. Some promise the eternal happiness after death, if one follows their path; yet none has returned to claim that they accomplished it by following that path. One sage declares that ‘truth is a pathless land’. Vedanta ascertains that the truth is beyond the space-time-object wise limitations; and you are that truth – tat tvam asi. The ‘Journey Beyond’ space-time limitations is the central theme of the discussions in this text.

Dr. K. Sadananda is a Material Scientist by profession, and worked at United States Naval Research Laboratory as Head of Deformation and Fracture, published extensively in Science, and received many awards.

He retired in 2005, and now works as a private consultant in the United States for six months of the year. He was also a visiting professor at the Indian Institute of Technology, Madras.

He is a disciple of Swami Chinmayananda, was a founding trustee of the Chinmaya Mission’s Washington Regional Center as well as Shree Siva Vishnu Temple, Maryland, USA. He served as Secretary and Treasurer of SEVA, Inc., a philanthropic organization formed around 1980 by Chinmaya Mission, to fund projects in India and elsewhere. Currently he is an Acharya or spiritual teacher of Chinmaya Mission, and splits his time between the USA and India. Advaita Academy has been sponsoring many of his talks on Vedanta and has made them available on You-tube under Acharya Sadaji. He is also an author a book, Introduction to Vedanta, available now on Amazon, USA.  He is married to Mrinalini Sadananda, who is well-known Kuchipudi dancer and Choreographer.