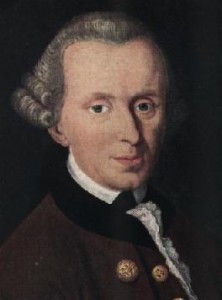 The Critique of Pure Reason is a long and intricate text. Most of what I discussed in Parts I and II is material covered just in the Introduction! In this final installment of our Kant series, we’ll briefly discuss the first formal section of the CPR, the Transcendental Aesthetic, where Kant elucidates his radical view of space and time. Also, from a later section of the critique, we will examine Kant’s notion of the transcendental synthetic unity of apperception, and I will argue that he is essentially talking about Atman in Western philosophical terms.

The first section of the critique is called the Transcendental Aesthetic because in it Kant is examining the forms of intuition that we bring a priori to what our senses reveal to us a posteriori. He is using the term aesthetic in its original Greek philosophical meaning of pertaining to perception by the senses, and not with any reference to the modern connotation of “aesthetics,” having to do with beauty or the work of artists.

Kant’s Views on Space and Time

As noted in his definition of transcendental idealism, Kant’s position is that space and time are “sensible forms of our intuition.” What does he mean by this exactly? To understand Kant’s meaning, we first need to absorb the important distinction he draws between raw sensations and the forms which yield a manifold of relations between those sensations. In other words, our empirical experiences do not come to us as raw unordered random bits of data, but rather in ordered relations between apparent objects.

Kant’s argument is that the matter or sensory data is given a posteriori, but the forms can have nothing to do with sensation, and therefore must be given a priori. We bring the forms with us to our perceptions, to put it more crudely. According to Kant, the two pure intuitive forms, space and time, are a priori necessary conditions that make possible the ordering of sensory inputs. His formal proof for this conclusion is rather technical, so I will not try to fully present it here.

A short version of Kant’s argument involves a simple thought experiment. If we think away all external appearances, we are still not able to think away space. A representation of space is still there as a logical condition of the possibility of external appearances. In the same manner, if we think away all internal states, there is still the concept of time as a condition of their possibility. It is clear, therefore, that space and time are not concepts derived empirically, but rather are intuitions without which structured empirical experience would not be possible. They are necessary conditions for perception to take place.

Kant is not saying that space and time are completely illusory. They exist empirically in the sense that we observe all experiences to take place in space and time. But since we cannot apply these intuitive forms to things-in-themselves, Kant’s position is that space and time are transcendentally ideal. They are only valid in the phenomenal sphere and cannot be considered apart from their appearance in us.

In other words, space and time, according to Kant, are only an apparent reality, and not something we can attribute to any “real” objects we may be perceiving. This view is entirely consistent with the concept of the transactional (vyAvahArika) order of reality as per Advaita. Space and time are part of the perceptual apparatus of the jIva, and not Real in the sense of being truly invariant, never to be sublated or negated.

While Kant does not reflect on the states of dreaming or deep sleep, as did the much earlier philosopher, Gaudapada, nothing in what Kant says is inconsistent with the Advaita teaching on deep sleep. If space and time are a priori forms of knowledge, then it makes sense to consider that they “fold up” in the deep sleep state and go dormant. If there are no objects of perception, there is no manifestation of a priori knowledge of space and time either.

Perhaps this helps to explain why our sense of time vanishes during deep sleep, and we have no sense of spatiality either. Yet when we awake, we seem to automatically build the world all over again in our heads. We think space and time are external to us and objectively real, but that is just another of mAyA’s tricks. Space and time are nothing more than Ignorance, avidyA, wired directly into our cognitive faculties. In that sense, if we are seeing something moving in space and time, we are being tricked by our own equipment.

In this final section, I will discuss Kant’s transcendental synthetic unity of apperception as a concept essentially equivalent to Atman (and a good example of why Sanskrit is a better language in which to discuss such matters – one relatively simple word replaces a difficult five-word phrase!).

We already know what Kant means by transcendental – the mode of cognition of objects, a priori, that is, prior to experience. We also know what he means by synthetic – ampliative knowledge rather than merely explicative. But what about unity of apperception? When referring to a priori knowledge, Kant uses the term apperception rather than calling it perception, which would imply empirical experience and therefore disqualify as a priori. Further, for us to have experiences, we must recognize them as our own. We must be able to say “I think” of each of our empirical experiences. This is apperception. When Kant refers to the unity of apperception he means self-consciousness and says so plainly:

I also call the unity of apperception the transcendental unity of self-consciousness, in order to indicate that a priori knowledge can be obtained from it. CPR p.125, B133

The word ‘synthetic’ is included in the phrase because of a very important and subtle point. All the “I thinks” about individual representations must be recognizable from a single unified point of view, the transcendental subject. So we are talking about the synthesis of the “I think” with each separate representation, not just analytic knowledge of free-floating representations that are not anchored as “mine.”

Taking the whole thing together, transcendental synthetic unity of apperception is the self-consciousness prefigured in all our observations without exception, the I thought that accompanies all perceptual experience. As Kant says, “It must be possible for the I think to accompany all my representations.” He refers to the I think representation as pure apperception, again to ensure his point that we are talking about a priori knowledge and nothing belonging to sensibility.

Note that Kant says that the I think is “…one and the same in all consciousness.” This is equivalent to saying that self-consciousness a priori is always the same regardless of its locus.

I mentioned in Part I that Kant had seemingly arrived at an independent derivation of the seer-seen discrimination discussed by Shankara. Kant said that we do not distinguish between the raw material of our sense impressions and that which our own faculty of knowledge supplies of itself, “until long practice has made us attentive to it and rendered us capable of separating one from the other.” The “separation” to which Kant refers sounds very much like viveka, discrimination.

Comparing to the Advaita view, here are a pair of verses from Drg-Drysa Viveka.

IV: Consciousness illumines (such other mental states as) desire, determination and doubt, belief and non-belief, constancy and its opposite, modesty, understanding, fear and others, because it (Consciousness) is a unity.

V: This Consciousness does neither rise nor set. It does not increase; nor does it suffer decay. Being self-luminous, it illumines everything else without any other aid.

What is being imparted here is essentially the same as what Kant said. Consciousness is a unity that illumines all other mental states (representations), and there is nothing to be added over and above Consciousness. The I think to which Kant refers is the unity of consciousness that allows experiential perception to occur. Kant’s position is that there is a transcendental (i.e., a priori and therefore already present prior to perception) self-consciousness that is the key ingredient, without which reason could not operate, and knowledge could not take place at all.

I would argue based on these points that Kant’s conception on the unity of consciousness parallels that of Atman (Self). He takes self-consciousness as primary, and notes that in its absence everything would simply vanish. The words are different, and far more complicated with Kant, but the essential point is the same. Existential self-awareness, Consciousness, is the basis on which all perceptions depend.

The classic Advaita text, Panchadasi (v 3), provides additional support for this parallel between Kant’s “I think” and Atman:

The infinite, all-pervasive, all-supporting Brahman manifests Himself as the ‘I’ in man. He is the immutable witness of the functions of the intellect in this body. This process (of embodiment) is necessary for Self-knowledge.

Certainly, Kant did not go as far as Vedanta, and there is much in his philosophy that is inconsistent with Advaita. However, he is worth reading nonetheless. After studying him, it becomes impossible to think the same way about space, time, and the limits of human reason.

In concluding this series on Kant’s relevance to Advaita, let me say that I have barely scratched the surface of his thought. The Critique is formidable, and requires a serious commitment of time and effort. The reward is time well spent with one history’s greatest geniuses, a man of astonishing brilliance and clarity, who started his own Copernican revolution in philosophy. The Prolegomena is shorter and more accessible, however, and within reach of readers interested in spending a few concentrated hours on the subject of metaphysics.

How can we know anything at all? The question is valid for Western philosophy and also for Advaita. To the extent that Kant’s work addresses this ancient question head-on, he is on a par with the greatest thinkers in history, and in his own way a RRiShi for the West.

8 thoughts on “The Relevance of Kant’s Transcendental Idealism to Advaita Vedanta, Part III”