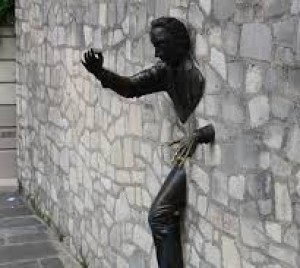 Fear can be caused by a perceived threat which could be either from within the body-mind or from a source external to the body. The source of fear itself and consequently the type of fear can be either real or imaginary. We shall, however, not consider the issues related to the nature of the source causing the fear in this essay. We shall treat fear as a ‘signaling mechanism.’ Viewed thus, ‘fear’ includes all its other manifestations and variations like  anger, hatred, disgust, anxiety, revenge etc. The signal itself appears as tightening of muscles, fastness of breath, heaviness in the heart area, slowness of digestive processes, dilation of pupils of the eye, contortion in the facial muscles, perspiration and so on. Depending on the intensity of the threat, the flux of thoughts may alter and even the sense of a ‘separate self’ may disappear.

A point to be remembered is that, though all such reactions are commonly attributed to the source, the perceived source itself is not the cause. It is in the way one’s body-mind are programmed to react. Suppose you sweat on mistakenly seeing a rope as a snake in semi-darkness. The unreal snake in the rope has actually nothing to do with the way your body has reacted.

Therefore, one needs to be highly vigilant in discriminating the sensations as those which are felt by the body or the separate sense of ‘me.’ Unless one is very careful, one may easily classify mistakenly the fear of the body to be that of the ‘me’ and vice versa.

It is clear from the above analysis that we do not consider here ‘fear’ to be the opposite of desire. While one may, sometimes, think that the consequences of an ‘undesirable’ thing or event as something to be ‘feared,’ the undesirable need not always trigger the red flag of fear. For example, it is not desirable that there should be high illiteracy in Timbaktu. The undesirability of this does not trigger a fear in my body-mind system.

Swami Sivananda of the Divine Life Society wrote a small book on the “Conquest of fear.”  My thanks to Dennis who has been kind to bring to my attention the above book which is available free online at the Divine Life Society Web site. The Swami discussed in the book a variety of phobias that could possibly be present in a human being.  A greater part of the book is, however, devoted to controlling or conquering the fear by a seeker through effortful training of the body-mind. The book gives many practical tips in cultivating self-discipline, if one is desirous of opting for such an approach. A prescriptive course of action to training the body, however, can be valid if and only iff the seeker believes that there exists a gross solid body and a subtle mind for him/her, that s/he claims ownership to the body-mind and also thinks that they can be controlled by him/her. One simple thought on how many billions of processes and reactions go on at the molecular and cellular level in the body and on how many such processes one has the ability to control should lay bare the fact that s/he can control hardly anything that goes on with or in the body. Further, from the way the problem is posed by the questioner here, we know that s/he is knowledgeable of the Advaitic teaching which says that s/he is not his body-mind. Then why expend the energies on retraining the body-mind in order to inhibit the expression of their natural built-in mechanisms? Does beating the dream horse hasten my pace?

In short, it is important to identify whether the fear has originated as a signal of threat faced by the body or as a signal of the threat faced by the imaginary separate sense of self, the ‘me.’ This is critical in deciding on how one handles that signal and what response will be appropriate. While we are at it, it will also be very educative and useful to explore what would brahman say to fear, if brahman were to speak, for after all, you know that the true ‘You’ are brahman. In effect, we shall investigate the fear from the perspective of the body, the separate ‘me’ and brahman.

But before we take up that 3-pronged inquiry, let us first be clear about a couple of questions that often raise their head in this connection, all such questions being the result of our incomplete understanding of Advaitic teaching.   One question is why at all we perceive the ‘other,’ an object, to be apparently different or removed from me? It is because “I,” the Infinite, unbound, dimensionless brahman has willingly given up My Dimensionlessness (anantatva) and assumed finiteness for myself as a chidAbhAsa, a contracted ‘me.’ It can be understood as the open infinite space taking the shape of a limited room-space inside a room or the form of ‘pot-space’ inside a pot by imagining the delimiting walls (of the room or pot respectively) around myself.

A corollary question that is often asked is if the bounding walls are imaginary and not really existent, why can’t I walk through walls? It is but a variation of the famous “gajopi mithyA palAyanaMca mithyA” story with which the dualists make fun of Shankara’s teaching. The answer lies in the fact that ‘I’ have become an object like a wall and two objects cannot occupy the same space. A detailed presentation of this topic can be found here.

Prof. D. Hoffman of UCAL provides an explanation from a Neuroscientific point of view using the desk-top metaphor. He compares the spacetime-world to the computer screen and the individual icons on the monitor to the objects in the world. The icons are not taken ‘literally’ to be the real things they stand for, yet they are taken in all ‘seriousness.’ You do not drag an icon to the Recycle bin because it is not the real file. So also the objects of the world which hide the ‘reality’ are to be taken “seriously but not literally.” It is quite instructive to watch his TED talk and to muse how similar is his explanation to what Advaita teaches.

Fear and the gross body:

Once it is clear that the gross physical body is another ‘object’ in the world and “I” am not its owner, what goes on with or in the body cannot be of any concern for the seeker. The body is like the squeezed out paste from a tube. There is hardly anything one can do with it. Let it complete whatever course of action left for it and meet its end. (We will not go into the detail here on the questions of who squeezed this body out and why). So as a seeker on the path of inquiry, one need not be concerned with the fears arising in the body apart from just noticing them and let the body take appropriate measures in response to the perceived threat. It may take a flight, it may dig its heels and fight or it may play possum and pretend to be dead for the time being.

Detecting and handling the fears arising in the imaginary ‘self’ is critical for the spiritual aspirant. Often times the false sense of ‘me’ may appropriate the Non-dual teaching to itself and persist in its existence, whereas the entire exercise of the seeker is aimed at the dissolution of that very sense of ‘me.’ The false sense of ‘me’ may even cover the self-luminous Consciousness under several layers of imaginary sheaths, projecting its continuity even as each layer drops off.  The sense of a ‘me’ has a bagful of tricks to secure its continuity or to protect and to perpetuate itself by aggrandizing itself. Accordingly its response to a perceived threat is either to feel ‘hurt’ and to withdraw into a shell or to seek authority and thus fortify itself. It may employ several subtle tactic to avoid being vulnerable.

2 thoughts on “Fear from wild creatures – 2”