Year 2012 is coming to a close and we are getting ready for one more end-of-the-year celebrations. People are already in a festive mood – remembering friends, recalling  favors received and planning for reciprocation with gifts. As you shop and bring home the packets, you plan to embellish them with a hand-crafted insignia to show your extra care and love. So you take a pair of scissors in hand and begin to cut a piece of paper molding it into an attractive shape. Your child suddenly comments: “Why do you purse your lips when you are cutting the paper?” 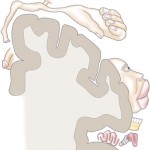 What? Pursed the lips? You were not even conscious of the face, forget the lips.You were so much lost in the job with all your attention focused on the fingers and the scissors, you were unaware of the tightness in your face. Why should the lips tense up? And you  don’t even know about it!

You may be a six footer weighing 60 – 70 Kg having seen half a century or more of summers (and winters); or may be a short and smart young man of  20.  The wetware weighing less than a Kg and half (about 3 pounds) sitting between your ears contains an encrypted miniature model of who you are. It has all the maps representing your past, your knowledge, your expertise, tastes, likes, dislikes – everything that describes what you call as your ‘personality.’

You have nearly eighty six billion neurons and ten times that number of glial and other cells in your brain to do all the ‘Front Office’ job for you. The millimeter long nematode worm manages its affairs with only 302 neurons, the cockroach in the drain with about a million while the elephant can boast of 200 billion neurons.

The top four millimeters of your brain is the neocortex and takes care of such functions as sensory perception, generation of motor commands, conscious thought and language. Your entire body is mapped in the sensory part of the neocortex scaled not according to the size of the body part but how sensitive that part is to external stimuli. For example the whole of your trunk occupies a much less area in the sensory cortex than your lips do! The configuration too does not exactly follow the shape of the body. The face area is quite a bit cut off from the neck and trunk and appears in a different location of the cortex. The lips are represented in an area which is adjacent to that of fingers, genitals jostle with toes and so on. If we build a picture of the  sensory cortical representation as per the body parts, we get an odd shaped creature as shown in the Figure 1. It is called the ‘Homunculus.’ Because of the proximity of the finger real estate in the cortex to that of the lips, the tension of carefully cutting the paper by the fingers reflects also in the lips. A look at the figure will also tell you, if you wondered any time, why fiddling the big toe could excite some people.

The homunculus is an example to show how hard-wired our brains are in our functions. Talking of being hard-wired, it is quite interesting to know that our brains are also designed in nature to detect injustice. For the first time the scientists from the University of Chicago have demonstrated about a week ago, ” how the brain is hard-wired to recognize when another person is being intentionally harmed.”  Prof. J. Decety says that this finding “provides new insights into how such recognition is connected with emotion and morality.”

The authors of the paper investigated in their research the reaction in the brains of “adults who watched videos of people who suffered accidental harm and intentional harm.” It was found by them that the intentional harm sequence produced a response in the brain almost instantly. 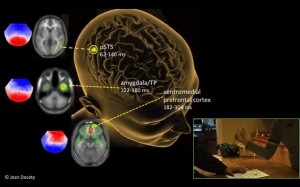 “It was observed that within 60 milliseconds, the right posterior superior temporal sulcus (also known as TPJ area), located in the back of the brain, was first activated, with different activity depending on whether the harm was intentional or accidental. It was followed in quick succession by the amygdala, often linked with emotion, and the ventromedial prefrontal cortex (180 milliseconds), the portion of the brain that plays a critical role in moral decision-making. There was no such response in the amygdala and ventromedial prefrontal cortex when the harm was accidental” (Fig. 2).

According to Dr. Decety, “the long history of mammalian evolution has shaped our brains to be sensitive to signs of suffering of others. And this constitutes a natural foundation for morality and sensitivity to justice. The new research suggests that emotion and the perception of intentionality, rather than deliberate reasoning, comprise the vital first component of moral responses—at least for responses that stem from care for others.”

Do these findings of Neuroscience then tell us that the philosophical teachings of Advaita, exhorting us to inquire and know who we truly are in order to transform ourselves, have no meaning and we are just logjammed into whatever the nature has destined us to be?

The answer is a clear big no. There is a lot of flexibility built into the brain. This is called neuroplasticity and can come about in two ways – either from a change in the neuronal connections or from a change in the joints (called synapses) through which one neuron talks to another neuron. Though “the blueprint for brain development is orchestrated by a genetic master plan”, as Christina Karns of the University of Oregon  puts it, “many experiments have demonstrated that while genes play an important role, they must interact significantly with the environment to sculpt brain structure and function. In fact, brain development may be largely self-organizing in response to environmental cues.”

The neuronal connections in the brain are governed by two principal mantras:

The first indicates that as we use our mental faculties the neurons in different parts of the brain that work together get reinforced in their relationship.  The second principle tells us that if we neglect and stop the usage, the connectivities get weakened and even destroyed in course of time. So learning new things and practicing what is learnt is of utmost importance for maintaining a healthy brain.

Our ancient Seers and Sages found that meditation is a powerful tool in altering the structure and texture of our brain (See: Does Meditation Change the brain? Parts – 1, 2, and 3). They averred that a change in the brain can be brought about by intense thinking citing bhramara kITaka nyAya (the Doctrine of the caterpillar metamorphosing into the wasp) . Sankara says in Vivekachudamani (verse 358) that a man will be  Brahman by intently meditating on Brahman and quotes this doctrine in support.

An interesting academic question that arises would be what sort of changes does the brain show after the individual is transformed to be Brahman.