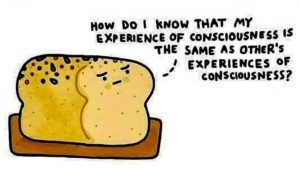 Quoting from the talk of an Advaita teacher on the message of the aitareya Upanishad:

Goodness Gracious! What a drama does Consciousness play!”

It is a great rejoicing for a Vedantin who really groks that play of the Consciousness and fully ingests the Oneness of the Seer and the seen (subject-object), . Shankara likes to describe it as “reveling in love.” Commenting on the mantra 7.25.2 of chAndogya, he writes:

Meaning:  “It is Self Itself that is all everywhere. The wise man who sees this One, unborn, all-pervading, like AkAsha, full, without a second, and having seen It, reflects upon It and understands lt, he comes to love Self ; i. e. has all his love, affection, joy, centered in the Self, so also he revels with the Self;

‘Love’ (rati’) stands for what is carried on with the body alone, while ‘Real ‘ krIDa, stands for what is carried on through external means entirely; as is clear from the use of the root ‘krIDa‘ to revel, which is used in the world in connection with one’s wives and friends. It is not so for the wise man; for him both these (‘love’ and ‘reveling’) are brought about by his knowledge of the Self.

The enjoyment of company is pleasure due to the companionship of two persons, this also for the wise, is independent of duality (the second person). Similarly, he rejoices in the Self;

For the ignorant, the rejoicing is due to sound and other objects. Not so for the wise, for whom, all rejoicing, at all times and in all ways is due to the Self alone.

Perhaps that stands as a redoubtable test for Self-realization.

[Note: The Pic at the top left is adopted from an Internet Post.]