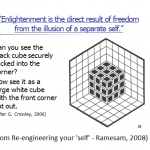 In providing answers to those very  questions, volumes have been written, several concepts have been floated and related downstream issues have been under constant debate from several centuries (if not millennia) ago up to even now . The positions taken are so extreme and contradictory to each other that protagonists of different propositions do not see eye to eye.  Unable to wrap their minds around the Advaita concepts and unconvinced by the Advaita models, some people (Tatva vadins – followers of the 13th century Madhvacharya) ascribe as much reality to the individual as to brahman but deny the identity of the two. The fights between them and the Advaitins are legendary. And there are notorious disagreements even within the Advaitins also on subtle details of the theories they propose as answers. Hence it is quite safe to say at the outset that there are no straight answers to any of these fundamental questions, as you may be already knowing from your voracious reading. Hence, switching on all caveats and disclaimers …… …… ……, I stick my neck out.

Q: “ …. how such a finite entity (and not the delusions it is capable of) can arise in the first place – even if the entity and its experience are a mere appearance.”

The FIRST origin of a finite entity is an “Explanatory Gap.”

Neither scriptures nor any Acharyas have been able to answer in a manner that is convincing to the human mind. Some even wave away their hand to say that ‘the human mind’ can never understand. Some wrap it in euphemism (words like anAdi = beginningless) or in mesmerizing words like ‘mAyA,‘ instead of plainly saying “I do not know.” [mAyA in Vedic times simply meant ‘magic.’ It is only in post-Shankara times it reached a different connotation.]

Suppose there is a huge water body. A few bubbles have formed in it due to turbulence (turbulence is also from within the water body and it is not apart from or extraneous to it). That means the bubbles or bubbling is not separate from the water body. The whole system is One.

To answer other subquestions:Think yourself as one of the bubbles. The bubble may consider its thin film as a solid and substantial wall separating it from the rest. Then that bubble becomes a finite, separate individual and the rest of the water body its world.  Its life and destiny are not in its control and it feels limited and constrained. If it has no such thoughts of separation, it will remain just as a modulation within the total water body (which has within it the turbulence + whatever other things).

So two POVs are possible – one POV is as a single separate bubble and the other is as the totality.

The British Non-dualist author G. Crowley says it best illustrating with a Necker cube. He explains that “Enlightenment is the direct result of freedom from the illusion of a separate self.”

Please see the figure at top left. Clicking on it will enlarge it.

(It is slide # 38 from the PPt presentation Re-engineering your ‘self’ at Beyond Advaita Blog http://beyond-advaita.blogspot.com/ )

View 1 (Finite individual): Can you see the black cube securely tucked into the corner?

View 2 (The Entirety): Now see it as a large white cube with the front corner cut out.

Nothing really changes in “what IS,” whatever may be the view, 1 or 2.

Q:  “Another problem that I simply cannot get my head around is that of reincarnation.”

The concept of reincarnation is a “teaching device” for one who begins the ‘seeking’ with the belief that s/he is ‘born’ and he is a separate individual.

There is no truth to reincarnation. (Please see: Infirmities in karma theory: http://www.advaita.org.uk/discourses/teachers/karma_ramesam.htm )

If you subscribe to ajAti vAda (nothing whatsoever is born) of Advaita, where is the question of ‘rebirth’, when birth itself is not there?

Further, as you suggested, dying and being born is a daily affair – I would say not even daily, it is a moment to moment affair. You (an “I”) is born with each thought (of ‘me-mine’) and dead with the end of that thought!

Q: “… what are the consequences for one who fails to attain enlightenment in this life?”

Is there any “one” separate out there at all?

Death is non-existent in Advaita.

The physical matter constantly gets reformed/recycled.

‘Death’ is only the disappearance of a particular form/configuration.

Q: “ … ignorance of an individual is born and dies with that individual ….”

The concept of ‘Ignorance’ itself is ignorance! Ignorance is illusory.

Q: “ … even if that individual fails to become Self-realized.”

Self-realization itself is a myth – remember GK II-32!

4 thoughts on “Questions by Peregrinus”