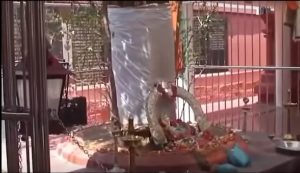 However, even as a little kid, Shiva Ramakrishna seemed to be very disinterested in worldly things and showed a detached attitude towards everything. This got his parents worried. So they decided to get him married early.  They found a suitable girl and celebrated the marriage when he was seventeen years old. After a few years when the girl attained puberty, Mr. Shiva went to visit her and also celebrate the first night. It was quite late in the evening and already very dark by the time he reached. He was hungry and so he headed straight to the kitchen. His Mother-in-law, however, told him that it would take a little more time and requested him to wait outside.

The words of his Mother-in-law had a huge impact on the young Shiva. He felt that there was a deep and profound message in them for him. He took them to mean that he shouldn’t become a householder and instead should study Vedanta and attain Liberation. At that very moment, he renounced everything and and went away in search of an appropriate Guru.

Shiva’s wanderings took him to a great saint by name Parama Shivendra Saraswati. He learnt all the scriptures under his tutelage. He became an expert in logic. He earned a great name for his eloquent orations and became famous as a very skillful debater.  The teacher Parama Shivendra was impressed. In appreciation of his devotion, knowledge and detachment, he granted Sannyasa (Asceticism) to Shiva and christened him as Sada Shiva Brahmendra.

Sada Shiva’s fellow-students felt jealous of him. So they complained to their teacher. One day his teacher mildly warned him that he was able to shut off the mouths of all others in debates but he was unable to control his own oratory. He took the reprimand from the teacher as a sacred instruction for him. He then and there took a vow to observe utter “silence.”  He simply gave up talking completely for the rest of his lifetime!

Sada Shiva continued as a mendicant, leading a nomadic life near forests and river beds, begging alms whenever he was hungry.  With his detachment ripening and his askesis fructifying, Sada Shiva attained Self-realization.

Here are a few of the incidents people fondly remember about Sada Shiva. They clearly establish him to be a jIvanmukta:

Once he was sitting on the banks of Kaveri River and was lost in deep samAdhi. Suddenly it started raining cats and dogs. People advised him to move but their words did not reach his ears. Soon the river swelled and flooded the entire area. He was washed away into the river. The people felt sorry for his sudden demise.  Three months passed. A farmer was loading his cart with sand from the river. As he was digging with his shovel, he found that it was smeared with blood stains. Astonished at that, he carefully examined the sand, when he saw Sada Siva Brahmendra Swami in the same meditating pose as he was three months before. Soon the word spread and all the villagers worshiped him as an incarnation of Lord Siva and prayed to him. He smiled at the people, gave out a song and walked past them.  “I am brahman, I am all pervading ‘sat,’ I am devoid of fear’ was the meaning of that song. A jnAni may have a body but he is not confined to that body alone.

Once, long after people had almost forgotten the memories of his wanderings, he was walking through the streets of a town half naked completely immersed in an exalted state singing devoutly in praise of brhaman. Several locals followed him with great respect and devotion to him. But the local Muslim ruler was not pleased. He asked Sada Shiva to stop his singing. The Swami was hardly conscious of the ruler or his orders. Enraged by Shiva’s impudence, he ordered his soldiers to hack Shiva’s arms. Both arms fell on the ground and there was profuse blood flowing all over. However, Shiva was least concerned and continued his walk with joyful singing. The Muslim ruler was stunned by this and got scared. He fell at Shiva’s feet begging pardon.  Shiva then became conscious of the commotion. He looked at the Newab questioningly. When the ruler told him about the grave sinful action committed by him, Shiva looked at his shoulders and realized that his arms were cut. He instructed the Newb to fetch the two fallen arms. He attached them to his shoulders and simply walked away unconcerned singing his devotional song!

Realizing that a time had come to end his presence in the world, he reached Nerur town in Tamil Nadu and let the neighboring rulers know that he would be ending his life. He passed certain instructions on constructing a samAdhi for his body. At the auspicious chosen time, he entered the pit which was dug for him and sat in  a yogic posture. Before he went into samAdhi, he mentioned that a Bilva tree (bael – L. Aegle marmelos) would come over his samAdhi. He also mentioned that after 10 days, someone would bring a Shiva Linga and it has to be installed at a particular distance from his samAdhi. Needless to say, it happened the same way.

Sada Shiva Brahmendra entered into jIva samAdhi (buried alive) around April-May 1755 AD. The day of his going into samAdhi is celebrated annually even today. 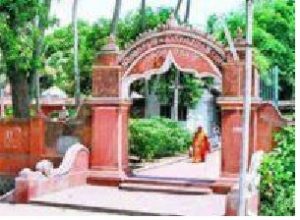 Sada Shiva Brahmendra had written several books on Advaita. One of the popular works is Atma vidyA vilasam (The Bliss and Charm of Self-Knowledge).

Some verses from this work:

18. Even if the sun’s rays become cold, or the moon becomes hot, or a flame goes downward, the jIvanmukta is not astonished, knowing that all this is only Maya.

40.  After having merged the entire universe, surrendering himself to the part-less Reality which remains, he eats just a morsel of food got due to his praarabdha karma.

46.  With his shoulder for pillow, the earth for bed, and the sky for covering, he sleeps, overwhelmed by bliss, embracing the damsel of detachment.

49.  The knower of the self wears a garland of lotuses in the form of places unfrequented by people, is adorned by the wish-yielding creeper in the form of detachment towards women, and consumes the pill of nectar in the form of dishonor (by the ignorant). (The idea is that he stays only in deserted places, is not at all attracted by sensual pleasures and welcomes dishonor rather than honor).

62.  The indescribable Reality shines eternally. It has no taste, or smell or form. It is beyond the three guNa-s – sattva, rajas and tamas. It is incomparable (because there is no other to be compared with) and beyond all fear.