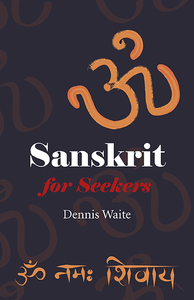 Since you are reading this blog, you are presumably a spiritual seeker interested in Advaita. It is also very probable that your knowledge of Sanskrit is minimal or non-existent. I receive occasional complaints about the use of ITRANS – the transliterated ‘English’ form of Sanskrit words – so even that causes problems for many, let alone the original script (called Devanagari) which Sanskrit uses. So why would you want to learn anything at all about the language? Well, if you really are interested in Advaita (or Buddhism, if it comes to that), it is a fact of life that most of the original material from which these teachings derive was written in Sanskrit. Without any knowledge of the language, without even the ability to look up a word in a dictionary, you are forced to rely upon the abilities, and the integrity, of whichever author happened to ‘translate’ the original text on which he or she is commenting. I am currently writing a book on the Mandukya Upanishad and Gaudapada kArikA-s, and this has involved me in referencing many different translations of the original text. [Note that this is a good example why you need to know some Sanskrit. The word kArikA means ‘a verse, commentary or treatise’ but if you ignore the capitals and write this as ‘karika’, it means ‘an elephant’!] And it would amaze you how it is possible to render quite different meanings. Whether this is because of language ability or because the author has a vested interest in propagating a particular point of view is not always possible to say. What I can say, is that is essential to be able to check specific words from time to time to ensure one gleans original intent rather than a modern, possibly biased interpretation. And, before I continue, here is a confession from the introduction to the book:

Before continuing, I may as well confirm the implied and appalling admission above: I know very little Sanskrit! I cannot construct sentences or even decline nouns or conjugate verbs. I can just about read the script. I can sometimes split words into their parts or put them together – but would almost always have to refer to other sources for assistance in this. I could write the script, very clumsily, if I had to, providing I could refer to a list of the characters or to this book. But, let’s face it, why would I want to? You need not just any italic pen, but one with a sloping nib, for goodness’ sake! With free software on the Internet to convert transliterated Roman characters into the Sanskrit script, there is not really any need. What then, you may justifiably ask, gives me the credentials (or temerity) to write a book about Sanskrit? Well, I hope that by the time you finish reading this short introduction, you will know and accept the answer. Basically, I was – and to a degree still am – in the same position that you are.

Accordingly, this book will not teach you how to read, write or speak Sanskrit. Its aim is simple: to teach you just enough to enable you to read Devanagari script, separate it out into words and look them up in a dictionary. There are no declensions or conjugations to learn and no need to learn lots of vocabulary. Most of the effort involved is simply to learn the alphabet. Of course, this is rather more difficult for most adults than was learning the Roman alphabet when you were a child. For a start, there are a few more than 26 letters…

The book is in three sections. First you learn the alphabet in its transliterated form. You are given both the ITRANS format that is commonly used on the Internet and the form with diacritical marks that is used in books. Next you go through the entire process again, learning the script form of the letters. Just to make things a bit more interesting, some of these letters change their form slightly when combined with other letters – these are called ‘conjunct’ characters. In the third section, there are some practical examples to prove to you that you can now actually translate some simple scriptural texts for yourself. Finally, there are a number of appendices containing such things as resources on the Internet for further learning, on-line dictionaries, Sanskrit documents etc, information about other transliteration schemes and letter forms, how to learn to write the script.