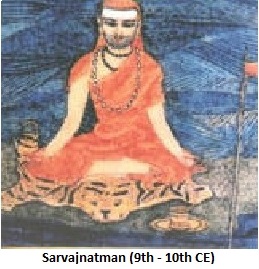 Sarvajnatman, a well-reputed advaita Acharya of the 9th-10th century, was the author of samkshepa shArIraka.  As the title indicates, this book is a brief presentation of Sankara’s sUtra bhAshya in four chapters corresponding to the four adhyAya-s of the brahma sUtra-s.

Sarvajnatman sums up the essential nature of brahman in ten words. They are:

advaita teaches that you and brahman are one and the same. You being already brahman, the above ten words, therefore, describe you also. That means you, yourself, are Happiness.  So Happiness should be known to you like you know the back of your hand. You do not have to search for or attain Happiness.

But an enigmatic question arises: Okay, I know that I am already eternally existing, knowing and  ever happy brahman.  How come I don’t I know the Happiness which should be present right here? What ghost of an obstruction would block me from feeling it, from seeing it?

The shAstra replies: Oh, Yea, something like the Ghost of Bharcchu can cripple you from seeing the very things that are right in front of you!

“The Ghost of Bharcchu?  What’s that?,” you ask in wonderment.

The Ghost is a reference to the pratibandhaka-s (obstacles) in attaining Self-Knowledge. The last but one sUtra in the third adhyAya of brahma sUtra-s talks about them. The sUtra (3.4.51) tells us that sometimes, strangely, even if Self-Knowledge arises we seem to be lacking the courage to accept It as the end-point!

The story of Bharcchu from samkshepa shArIraka shows how this happens. Swami Paramarthananda explains thus:

Bharcchu was the favorite minister of a king, and once he went to the forest and did
not return. The king was very disturbed, but a few other ministers, who were jealous .of Bharcchu, were very happy at his disappearance. As such they started a disinformation campaign saying that he died in the forest and was roaming the forest as a ghost. Everyone believed the story. Then, after some years, the king happened to go on a hunting  trip to the same forest. He saw Bharcchu seated under a tree and in deep meditation. He clearly saw Bharcchu with his own eyes. But the King did not feel happy at finding his favorite minister. On the top of it, he fled from there in fright.

Why?  Because he thought it was the ghost of Bharcchu that he witnessed. Now, based on this, the shAstra analyses: Bharcchu, the prameyam is there. pramANam is giving pratyksha jnAnam. The king has no problem with his eyes. And the pramAta, the king, is there. So, the jnAna vRRitti is also produced –“There is Bharcchu.” And it is not paroksha jnAnam. It is aparoksha jnAnam (immediated). But the tragedy is that the king is not willing to accept it as jnAnam. He does not accept it as a valid fact. He rejects the jnAna vRRitti. And thus the  jnAna vRRitti does not produce the phalam of Ananda at seeing his beloved Bharcchu. Not only does he not get Ananda, he is scared and runs away!

So, here the problem is not the lack of knowledge, but the hesitation to accept the knowing as Knowledge. The king says “I don’t have Bharcchu jnAnam.” The most he will say is “I have Bharcchu ghost jnAnam.”

Similarly, brahman the prameyam is there, shAstra, the pramANam is there, and guru reveals the fact… But either the knowledge does not arise or it does arise and the seeker hesitates to accept the jnAna vRRitti as jnAnam. This is a pratibandhaka.

Sarvajnatman, calls it purusha aparAdha malina. The mind is with an impurity because of which jnAnam is not accepted as jnAnam.

How to remove these pratibandhaka-s? We have to continue with shravaNam, mananam and nididhyAsanam. Understanding will eventually take place, though one cannot say when.

18 thoughts on “The Ghost of Bharcchu”