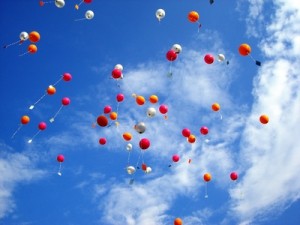 Lets look at the play of the universe. Pauli’s exclusion principle, fundamental to quantum mechanics, basically states that two electrons can never occupy the same space at the same time. As all matter in the universe contains electrons, it means that what we call life (including the play of the lifeless) is nothing but an ever-whirling dance: a dance of electrons in which there are no clashes. If you rub your hands together, the heat indicates that electrons have been displaced and thus every electron in the whole universe will need to adjust position to accommodate the displaced electrons. With every displaced electron, other electrons move in to take their places which necessitates yet other electrons move in to fill their deserted positions and in this way every electron in the universe changes position. Infinitely, eternally.

Life in its explosive creativity and infinite freedom – including individual expression in its multi-coloured diversity – is a marvel. Everything interlocks seamlessly, is tuned perfectly to one another, is optimally intertwined with one another.

However, if one considers life more specifically, doubts may arise. What about earthquakes, epidemics, droughts? What about age, illness, death? Can one really call this marvellous? Natural phenomena are still relatively easy to accept, at least as inevitable concomitants of the total phenomenon ‘life’: it is as it is. The interplay of natural laws is perfectly lawful, sometimes resulting in a summer of the century and sometimes in a flood of the century, sometimes in good health, sometimes in ill health. That’s life – perfect in its own way.

But this detached objectivity dwindles away if ‘work of man’ comes into play. What if the disease or epidemic comes about by the sloppiness of a lab? What if the death is not ‘natural’ but a nuclear accident? And what about the extinction of elephants or fine dust pollution? Such phenomena are man-made, one cannot blame ‘life’ for it, can one? Or smaller man-made things like train delays, the explosion of energy costs and the demise of newspapers, not to mention certain disagreeable fellow men and their disagreeable actions – are all these things supposed to reveal the perfection of life?!!

If one thinks about it, however, it is simply illogical to separate man from life. Every human being, even the most inhuman one, is an expression of life. In actual fact, we do not always separate life and man, we do so only if the results of human actions do not please us.

Let’s take a different view: what about the nasal spray which, in the twinkling of an eye, turns a blocked nose into an unblocked nose? Or the advanced measurement of volcanic activity on account of which a whole city can be saved? Or the possibility to travel from Berlin to New York in 7 hours? Without hesitation, we would say, yes, life is marvellous because it makes such achievements possible. If we like the result of something man-made, we can accept it as an expression of the brilliance of life. However, if we do not like the result, especially if it entails the death of people, the action is considered as life-negating. And something life-negating logically cannot be life itself. So if we do not like the result of man-made action, suddenly we no longer consider it as an expression of life.

This attitude reminds me of former times when one considered predators to be cruel instead of recognising that they simply behave according to their nature when hunting and killing. Accordingly one simply needs to disassociate oneself a little from ones own likes and dislikes and look at life from a higher perspective in order to recognise that it behaves according to his own nature. Nothing is missing, nothing ever goes wrong, nothing falls short. Life is a masterpiece.

But, if everything depends on life, I cannot exert any influence! What about free will? Counter question: is there anything that can be excluded from life? Is there anything that is beyond the total phenomenon of life? Even saying, „if everything depends on life, I…“ indicates that the person and life are separated. But such a separation simply does not exist. Everything is life, being, existence.

This means that even free will belongs to it, it is included in the play. Life plays – sometimes the play is called ‘free will’, sometimes ‘karma’ (or, if you prefer, ’destiny’).

The creativity of life comprises free will. Life is infinitely free, and every single person is an expression of this freedom. How could one not be free? Indeed, one is not free to go against life, that is, one is not free to do something that is not in keeping with life. Why not? Because one is life itself. Everything happens within the play of life: there is nothing apart from it.

However this does not mean that, if something is not to my liking, I toss in and withdraw to a lonely cave or idle away in front of the TV. As said, free will is included in the play of life. Whenever someone resists what happens to him, the play of life is called ‘free will’. Every person is different, thus some will be more inclined to fight than others. But no matter who does what, it never takes place outside life. And considering the overall plan one option is as justified as the other.

Both, passive compliance as well as proactive resistance can be problematic. However, a problem never arises for life but always for the individual. Here we arrive at the issue of ‘identification’. Whoever identifies – whether it be through opposition or through tolerance – that person believes in his identity as a separate individual and has managed to argue himself out of being an integral part of life. He does not see his action as a natural expression of individuality, i.e. of life, itself.

How do I know whether I am identified with my action? Quite simply: Identified action sooner or later leads to a feeling of sorrow. If the desired result does not come about, sorrow comes about without delay. If the result does come about, sorrow comes about a little later, namely if (1) one realizes that the result is not really what one wanted, or if (2) one actually did want it but after a while starts wanting something else or if (3) the result does not last. One of the three options will definitely happen. Why? Because that’s the way life is. (Please do not believe this statement, but check it out).

And how do I know that I am not identified with my action? It is playful – as playful as life itself. The action is not fixated on a certain result but rather an end in itself. In Advaita Vedanta this is called karma yoga. Extract from another essay[1]:

No matter what action is performed, the karma yogi takes the following decisive stance: I do what I can do and know that the result of my action does not lie in my hands[2]. This means that although I stand behind my actions I am not identified with them.

For this Vedanta inevitably includes ‚the divine’. The divine is nothing but the totality of all natural law and order and their seamless interlocking. It is called Ishvara. Karma yoga means: I act in the best of my knowledge and leave the result to Ishvara.

If I understand that in the end I have precious little in hand [3]then my attitude will change. Of course I will ask myself how to achieve the result that I want and act according to my conclusions. But knowing that I am integrated into Ishvara[4] I will approach everything much more playfully. Even desiring a certain result I know that my action is only one of many factors in the play of life.

As this understanding is based on deep insight into the ‘suchness’ of life, it certainly will not develop overnight. It grows with the recognition and acceptance of natural conditions. This, actually, should be quite easy because you just have to look around in order to see them. But in actual fact it is not that easy because habitual ways are persistent, even if they are mistaken. In the last blog I have shown that, in the end, nobody is separate from life. That statement is not based on faith. It is based on pure logic. Even the above statement ‘because that’s how life is’, is not a belief.

Yet many would rather like to stick to their habitual notions. To accept that I am not separate from the whole requires the willingness to leave behind the mental mainstream. The more I am anchored in the knowledge that I am life itself, the more I am able to do the best in every situation and leave the result to the big play of life.

Amusing and intelligent inspiration on this subject: http://www.youtube.com/watch?v=7W33HRc1A6c

2 thoughts on “The Play of Life”