The following is the continuation of an interview with Swami Dayananda Saraswati, conducted by John LeKay for Nonduality Magazine. That site is no longer available and the article was submitted by Dhanya. It is in three parts. Read Part 1

NDM: An Indian sage once said, “No learning or knowledge of scriptures is necessary to know the self, as no man requires a mirror to see himself.”

END_OF_DOCUMENT_TOKEN_TO_BE_REPLACED

Why doesn’t philosophy take into account non-western theories of justice?

There are two notions that are intimately involved and interconnected on this topic (justice) as seen from the Eastern perspective: 1) Dharma (Law), and 2) Ishvara or the creating and controlling aspect of God or the absolute reality. I will not cover here Confucianism or the far East – only India.

The notion of DHARMA is paramount in the Eastern philosophical-religious traditions alluded to above and is used in many combinations of words. The main meaning is ‘law’ or ‘order’ as it exists in the universe. Rather than man-made, it is a divine ordinance or, alternately, a cosmological law that maintains all things in equilibrium; as such, it cannot be far distant from the Western idea of justice (‘law and order’ and all its derivations and conditionings). It is a universal law from which nothing can deviate (literally, ‘what holds together’), whether it is in the social, the individual, or the moral realms.

END_OF_DOCUMENT_TOKEN_TO_BE_REPLACED

Q: I reflected a bit more about the logic I used in my previous email. In one sentence I said: “the person has no free will, because there is no person.” Rephrasing it, the logic goes: There is no person -> therefore, the person has no free will. I looked at it a bit more, and I realized that if the person truly doesn’t exist, then it doesn’t make sense to talk about ANY qualities about something non-existent, not just free will. So I think a more accurate and targeted line of questioning would be: ‘okay so the person is non-existent, but I am very obviously present, aware, and seeing these words right here and right now, so let me investigate the nature of myself.’ So this would lead to some form of self-inquiry. I guess in a way this is the essence of the direct path, to take a stand as awareness, and investigate your beliefs against the data of direct experience (in this case, the belief that I am a separate consciousness).

Nowhere in that line of questioning does free will come up!

I also found these quotations from Rupert Spira and Greg Goode about the topic of free will, maybe you’ll find them interesting:

“The idea that we have the freedom to choose whether or not to become entangled with thoughts and feelings is a concession to the separate self we believe and feel ourself to be. From the separate self’s point of view, it has choice, freedom. If we think we are a separate self, then by definition we feel that we are making choices.

END_OF_DOCUMENT_TOKEN_TO_BE_REPLACED

Q: We talked earlier about the difference between the direct path and the traditional path.

I was looking through the free will section in your book Back to the Truth and I found this quotation by Franics Lucille:

We are entirely conditioned; therefore, there is no free will. It appears as though we exercise free choice, but in fact we are only reacting like automatons, running through the same patterns of our bio-sociological heritage without respite, leading invariably to the same old reactions, like a vending machine dispensing soft drinks in a train station. As individuals, our freedom is illusory, with the exception of the freedom which is ours at each moment to stop taking ourselves for separate individuals and thus putting an end to our ignorance and our suffering.

On the other hand, at the level of our deepest being, everything flows out of our freedom. Every thought, every perception takes birth because we want it to. We cannot understand this at the level of thought, but we can experience it. When we are totally open to the unknown, the personal entity is absent; then we realize that the tangible and intelligible universe arises out of this openness in the eternal present. We want, create and are at every moment everything in the unity of awareness. (Ref. 8)

END_OF_DOCUMENT_TOKEN_TO_BE_REPLACED

Q: I am struggling to reconcile the empirical account of what may be called ‘creation’ (the Big Bang, followed by billions of years of mechanically unfolding interactions with no sense of self, until the absurdly *recent* emergence of consciousness after further millions of years of blind evolution) with the advaitic concept of ‘creation’ (the absolute Being, timeless and changeless, manifesting in Itself as experience).

A: The ‘bottom line’ of Advaita is that there has never been any ‘creation’. There is only Brahman. Everything is Brahman. You are Brahman. The ‘universe’ is simply a ‘form’ of Brahman, to which you have given ‘names’ implying that there are separately existing entities.

The scriptures (from which Advaita derives) certainly give ‘empirical accounts’ of a creation. But these are interim explanations only to satisfy the enquirer temporarily until ready to accept the truth.

END_OF_DOCUMENT_TOKEN_TO_BE_REPLACED

Q: How can we be sure that Brahman is transcendent of the level of appearance? How can we rule out the possibility that it is imperceptible due to the limitations of our mind? Could Brahman be similar to that of a higher dimensional being that is non accessible to human minds, but able to be perceived on higher levels of reality? And wouldn’t this then invalidate claims of it being infinite and eternal, given that these are constructs built on the idea that Brahman is non-phenomenal?

Also, how can we make the connection between ishvara (creator), and sakshi (awareful witness)? Are they both referring to the same being? I am confused.

END_OF_DOCUMENT_TOKEN_TO_BE_REPLACED

Shankara differentiates what might be called ‘ordinary’ or ‘intellectual’ knowledge (j~nAna) from ‘transformative’ knowledge (vij~nAna). The knowledge becomes transforming – i.e. making it efficacious in conveying the status of jIvanmukti – when the gaining of it has been preceded by successful sAdhana chatuShTaya sampatti. In his bhAShya on muNDaka upaniShad 2.2.8, he says:

“Wise, discriminatory people (dhIrA) see through vij~nAna; vij~nAna is a special (vishihtena) knowledge (j~nAna), born out of the teaching of shAstra and AchArya (shAstra AchArya upadesha janitam), and received in a specially prepared mind, born (udbhutena) out of total detachment (vairAgya), having control of inner and outer organs (shama and dama), and which is therefore capable of upAsanA to begin with and later of nididhyAsana which together are called meditation (dhyAna). Through such a vij~nAna, wise people realize that the nature of the Atman (Atmatatvam) is non-different from the nature of Brahman (brahmatatvam)…” (Ref. 10)

‘Who am I?’ in communication

Who are we speaking of when we use the words ‘I’ and ‘you’ in writing and speech?

Since we are Advaitins, there are actually three possibilities:

END_OF_DOCUMENT_TOKEN_TO_BE_REPLACED

I have heard many examples of gold/ornament with regards to the universe and Brahman (Gold being brahman, the names/forms being the ornaments). I’m not sure I have fully grasped this comparison. In what sense does matter depend on Brahman?

A: The answer to your questions is really ‘it depends’. It depends upon which theory you are ‘using’/accepting.

The ‘simple’, traditional response is that Ishvara creates the world and there are detailed ‘explanations’ as to how this is done in several Upanishads (which do not always agree in the finer detail). To any modern, scientific mind, these explanations are not convincing (to put it politely). And you are right – when adhyAsa is removed for the jIva, the world is still there. Ishvara is both the material and efficient cause – matter IS Ishvara’s own substance, in the analogous way to the web being the spider’s own substance. This is the sRRiShTi-dRRiShTi-vAda theory – the world is created and we then see it.

There is what is believed by its adherents to be a more sophisticated theory, which is that the jIva sees the ‘form’ of brahman and effectively creates the universe out of it. You can appreciate this in the vAchArambhaNa sutras in Chandogya Upanishad. We impose forms on the non-dual substrate and give them names, thereby bringing about an apparent duality. This is the dRRiShTi-sRRiShTi-vAda theory – you see and then create your universe.

Of course, if you think about this second theory, you realize that these forms that you create have to include ‘other jIva-s’ and your own body-mind. This is equivalent to solipsism and is called the eka-jIva-vAda theory – ‘one-jIva’. It is effectively the same as DSV. And, again you are right – upon enlightenment (when ‘I’ am enlightened), the world will disappear.

Personally, I prefer to go straight to ajAti-vAda – there has never been any creation at all. There is only ever the non-dual brahman.

There is much written on all of this. As you appreciate, it is a complex topic. Have you read my last book, ‘A-U-M’? Gaudapada went straight to the heart of the matter and my book tries to cover all that he and Shankara said in their commentaries on the Mandukya Upanishad.

Have a look at Q.103 and http://www.advaita.org.uk/discourses/teachers/theories_vidyasankar.htm. 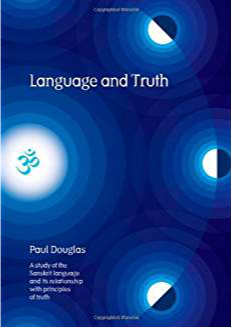 Here is the second of a two-part essay by Peter Bonnici, explaining why Sanskrit is so valuable and why a qualified teacher is necessary. (One of a number of essays, blogs and book reviews by myself and others which I will be reposting here over the next few months (they can no longer be found on-line at present). Dennis

The ability of Sanskrit to convey truth expressed through the vision of advaita is the holy grail pursued by Paul Douglas in ‘Language and Truth’. The explicit influences on Douglas’s understanding of Sanskrit come from two main sources: his spiritual guide, Shantananda Saraswati, one time AcArya of Jyotir Math in BadrinAth, and the linguist and grammarian BhatRRihari. In that sense it is a devotee’s book, a book that explores the language to validate the teachings of the guru, in particular, one of his statements: ‘The grammatical rules of Sanskrit are also the rules of creation’.

The book gives the general reader a good insight into the building blocks of the language and to the evolution of nouns and verbs from seed form (dhAtu) to fully inflected word in a sentence (pada). In clear, readable language we are given insights into the elements of Sanskrit that support the premise that the author wants to understand. END_OF_DOCUMENT_TOKEN_TO_BE_REPLACED