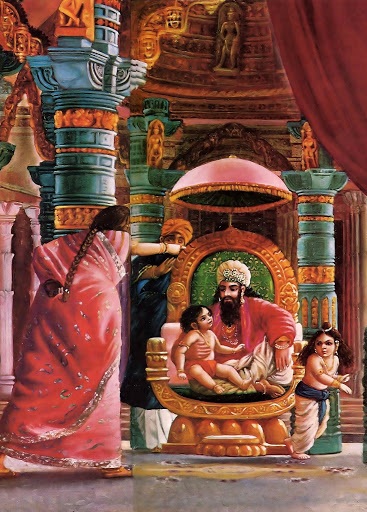 Dhruva was an adorable little boy. He saw his half-brother, Uttama, sitting and playing on the lap of their father, King Uttanapada. He too desired to climb on to the lap of Uttanapada. But his step-mother could hardly tolerate that. She gave a tight slap to him declaring that he was unfit to sit on the lap of the King as he was not born to her but to another queen. Crest-fallen and deeply hurt, the little kid, with his eyes full of tears, ran to his mother. His mother, a highly noble lady, consoled him and advised that he should achieve something so that people look at him with awe. The little Dhruva left the royal palace and went away to a distant forest. He met with a group of Sages in the forest and narrated to them his soulful story. They advised him to meditate on Vishnu. So, he embarked on a very austere and rigorous course of meditation. Regretting heavily the developments, the King and all his retinue, his mother, the queen and all his family implored that he should give up his askesis and return home. The King was even ready to abdicate the throne and promised to coronate him. But Dhruva was unrelenting. He did not succumb to the temptations and was uncompromising in his resolve. He pursued his meditation with greater vigor. He meditated on Vishnu, the Ultimate.

In course of time, pleased with Dhruva’s devotion and determination, Vishnu manifested in front of him and promised to grant him a boon. Dhruva requested for himself and his parents, “a lofty and eternal place which would be unsurpassable in the world.” Vishnu granted him his wish.

At this point, a very enlightening and deeply philosophical conversation takes place between Dhruv and Vishnu. It is highly instructive to all Advaitins and clarifies many intricate and subtly complex issues of the Non-dual doctrine. The dialog opens with a salvo of searching questions fired by Dhruva.

Lord! Only you can expound the Truth. Please do relieve my doubts and tell me who I am.

Vishnu:  Why do you want to ask these questions? Of what use are they for you, Dhruv? If I were to answer, neither you will be there, nor will I be, nor this world, nor even the ‘unsurpassable’ position that you sought. Better don’t get involved with these issues. Therefore, ask about something else and let this go.

Dhruva: Whatever it may be, so be it. But I do seek honest answers to my questions. Please don’t brush them aside. Let me know the Truth.

Vishnu: Dhruva, to speak the Truth, you do not exist, nor do I! Nor is there any world. It is all a fancy imagination. Nothing is real.

What truly exists is merely the Witness which is inaccessible to the mind and speech. It is the One that notices you, me and the world. Anything other than That Witness is just a name, an idea. An idea like the illusory snake which is apparently different from the rope. That is the reason why I am Non-dual.

Dhruva:  Oh, Me! That being so, my desire is not fulfilled. It is all just a worthless imagination to say that Lord Vishnu granted me an ‘unsurpassable’ position. It is like in a dream – the dreamer asking for an unsurpassable position and the dream-god granting it within the dream. It’s all a mere imagination, including you and your granting of a boon.

Vishnu:  But, Dhruva, don’t forsake this unsurpassable position granted by me. Just think of it as the ‘prArabdha’ of a jnAni (liberated man). The liberated man lives happily with whatever comes accepting it as his prArabdha. There is nothing wrong in that.

Dhruva:  When everything that exists is you yourself, the Non-dual one only, where from do these differences of a jnAni (Knower of the Self) and ajnAni (ignorant of the Self) pop up? Let it be; but please tell me who I am.

[The implied meaning is that all the entities that are “the seen” can never say anything about “the seer.” There is also no sense in the seer asking anyone else about himself. Therefore, each individual has to strive to know himself.]

Hey Dhruva! Suppose the characters in a dream raise up their hands and declare that “we are different from the dreamer and our own reality is independent of the dreamer,” all the sensible and learned people will laugh at it. They will say that it is a meaningless talk. It will be like the imaginary ideas and objects (nAma-rUpa) denying their very substratum which is the Beingness-Knowingness-Infinity. That is a funny position to take. Your asking me about yourself is no different from that.

Please remember that there is no scope within me to speak about me-ness (ahambhAva) and not-me-ness (tvambhAva). I am the Self-effulgent Oneness.

Dhruva:  In that case I have unnecessarily tortured my body. When there is nothing other than you, it would mean that I do not exist. When I am not there, there cannot be an unsurpassable position for me. Then what is the meaning in adoring you or talking about this and the higher worlds?

Vishnu:  Come on, Dhruv. Don’t speak immaturely like a child.

Whatever has happened (including your desire and what you talked about), has happened because of ignorance. Why to repent for it now? Why to cry over spilt milk? You are impelled in your actions by the impressions (vAsanA-s) stored in you (the genetic and memetic influences). I have not actually given anything to you!

Dhruva: Yea, but the regret is that I am already a fool unable to understand the various things and you have thrown me into deeper depths of inanity. Because, the unsurpassable position, the world and all the visible things are illusory, as they are apart from you, the only Sentience. Now please tell me a way to get out of this deep well of dark ignorance.

Vishnu:  The only way to be out of it is to consider yourself as well as the unsurpassable position and the entire world as none other than Vasudeva and give up your regret.

Dear Dhruv, as long as you do not wake up from sleep, you will have to keep moving somewhere or other within your dream world. And wise people do not rank the dream positions from a relative sense – some to be higher and some others to be inferior. To be out of the dark well-like samsAra is to know that all characters in the dream are an illusion and that the one who witnesses the dream is real. The seen (dRishya) is always finite and has a form. As long as one identifies with the seen, he will be incomplete; and he suffers the travails of the seen. When he knows to be the Seer and dissolves all the seen within oneself, he will be perfect and complete.

Dhruva:  No worry there. After all, when everything is Vishnu, repentance and regret too are Vishnu and so also non-repentance and non-regret.

Vishnu:  Now I shall take leave. May you be blessed and may you attain the Truth.

[The significance of the discourse will be evident once we apply the teaching to ourselves.

Let’s say “I am.” The “I AM” here does not refer to the gross body or the sensory organs or the mind or prAna (life-force). The “I AM” is the bare ‘throb’ of knowing one’s  own Presence. It is the pure Knowingness. It is Is-ness. It is the Seer, the one that notices everything. Therefore, all that appears to It is the “seen” including all objects and all the readers and the other so-called sentient beings. Both the movable and the immovable worldly forms constitute the sphere of the “seen” (dRishya) for the Me, the Seer.

Suppose all of the sentient creatures (including you, the readers) claim that they exist independent of Me, the Seer. If that were to be the case, the creatures and you cannot be seen by Me simply because, you are not any more a part of the “seen” (dRishya) for Me.

Remember that it is not only the creatures that appear to me are part of the sphere of the “seen” for Me, but also the seen (dRishya) includes my body, my mind, my life-force etc. along with the body, mind, life-force of the creatures and you, the readers.

[A Hint:  It will be easy to follow the argument if you think yourself as the only Sentient Seer and all that appears before you is the sphere of the seen (dRishya) for you.]

The sentient Knowing (jnAna) which is the Seer is formless (nirguNa) and featureless (nirAkara). Therefore, it has to be all-pervasive and One only (because there cannot be multiple all-pervading Infinities). Now think of the dRishya as the dream of that One Seer.

Because of the nature of Its all-pervasion, It subsumes within Itself all ideas and objects (nAma-rUpa), like flood waters submerge everything. The objects lose their separation and dissolve into this Oneness “Vision” of Me, the Seer. They will not anymore be able to retain their distinct IDs. They cannot have independent “Beingness” of their own, having merged in the Seer. The Seer alone exists then. Existence has to be One only. There cannot be multiple existences! (of the separate objects and Me, the Seer.

In other words, the entire seen (dRishya) is filled with the Seer (draShTa). That being so, the seen cannot make claims of existing by itself. It is like saying that the dream characters cannot claim independent existence apart from the dreamer. In the day-to-day awake world, we think ‘I am and others also are.’ We think in that manner because we have not woken up yet from the awake world we live in. Actually our awake world is no different from a dream.

The moral of the story is that we should consider our awake state world as a dream. But one may raise a question. “We witness dreams every night. In what way does the “noticing” of the dreams would differ from the new way we are now told to notice the awake world, if we have to see it to be dream-like?” The crucial difference is that we never “realize and recognize” in our daily nocturnal dreams that the seen (dRishya) is non-different from the Seer. We experience our dreams as though there is an external dream world with its dream objects and I am distinct from that which I see.

The nightly dreams we get do not happen because we intentionally, by our own volition, decide to get them. Some authors ignorantly and WRONGLY describe the dreams as jIva sRiShTi, a concept and term never used by Shankara. The daily dreams are anything but our volition! We, as jIva-s cannot plan or design or even script their story. If they are under our control, we could terminate them anytime or mold them in any way we would like to. They would have happened purely at our pleasure, for our pleasure, and as we decide. But the nightly dreams of ours are natural happenings beyond our control. We are helpless watchers.

What is being advised here is a sAdhana (praxis). We have to practice noticing the world as though it is a dream “intentionally” created by us. Like in day-dreaming. We can then clearly understand that the appearance of the world is no more than Me, the Seer. Our intellect keeps working in the intentional dreams unlike in the nightly dreams when the intellect becomes non-functional.]

Acknowledgements: The write up is adapted from Chapter 2 of the book, “Pakshapata rahita anubhava prakasha” by Swami Visuhddhananda, aka, Kali Kamli Baba. The book is available online here.