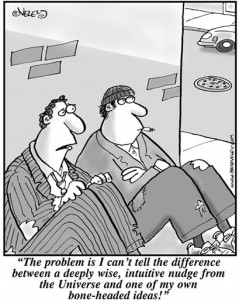 It looks to me that we are besieged by two genres of thought.

When I say two genres, I do not mean the yes- no- thoughts or being double minded and undecided in our view about things. Nor do I refer to split personalities. Actually it has NOTHING to do about the “content” of the thought.  What I have in mind is about the suite or family of thoughts – based on their possible source of origin (real or apparent).

As advaitin-s, we all know that everything is a manifestation of brahman. We shall use the term ‘Universal Self’ for It. The Universal Self is kUTastha – does not do or intend to do anything. It is changeless, actionless, eternal and It is Beingness-Consciousness-Infinity. We also know that we act, talk, walk, eat, breathe and live as an individual.  We shall use the term ‘self’ for this separate entity.

There are different theories that describe the genesis of ‘self’ from ‘Self.’ You know all those vAda-s (doctrines)  – AbhAsa (Illusion theory), bimba-pratibimba (Reflection theory), avaccheda (Delimitation theory), chchAya (shadow theory). We will not get into this discussion now.  The question here is:  Can the Universal Self and the delimited individual ‘self’ be causal (at least apparently) to two distinct streams of thoughts?

Let me illustrate with some examples the two distinct families of thought.

If I decide to stay even for as short a period as half a minute without getting a thought, I find it impossible (unless one is a practitioner of meditation).  I cannot also predict or decide in advance the particular thought I would get at any given moment. Obviously, then such thoughts that occur on their own without my volition are not under ‘my’ control.  As I am the separate delimited ‘self’ here speaking, it is quite safe to say that these thoughts are not under the control of my ‘self’.

Therefore, we may infer that all such thoughts that occur beyond my control are caused by the Universal Self. (Perhaps the more accurate way of formulating this sentence is to say that the Universal Self, int Its infinite freedom, has chosen to appear in the form of that particular thought at that moment.  But let us not get into these niceties of expression at this point).

Now consider these other kind of thoughts: I have put the kettle on the stove.  As soon as I see the steam coming from its snout, I get the thought, “Turn off the stove.”  Or, say, a surgeon by mistake cuts an artery and the patient starts bleeding. The good doctor has to immediately get the thought, “cauterize” or “put a clip.” Or I am, say, in the middle of an arithmetic calculation. I have to divide 30 by five. The thought that arises has got to be “six.” Or suppose a man on the street asks for directions. My response thought has to be related to the question. I cannot get a random thought that the sky is burning or some such stray meaningless idea. All these are sequential related thoughts like a Markov process, resulting from an earlier event.  Hence, it is reasonable to assume that these are under my control or, in other words, the control of the ‘self,’ chidAbhAsa.

The Philosophers right from ancient times were fascinated by the uncotrollability of the thoughts. In a “us vs. them” attitude, they came up with different explanations in the east and the west. Sage Vyasa said that the ‘mind’ (a term for the bundle of thoughts) was irrepressible like the wind for ‘us.’  Buddha compared our mind to an uncontrollable elephant. St. Paul said that the Spirit and the flesh were perpetually opposed to one another. Freud took this dualistic approach a step further. He designed a psychoanalytical system to strengthen ‘us’ (conscious self) to take control of the id (basic instincts). The American Psychologist Dr. Jonathan Haidt compared ‘us’ to a meek rider sitting on a mighty elephant called ‘mind.’

Neuroscientists tell us a different story. According to them, the ‘mind’ is simply what the brain does. The principal function of the brain is said to be the protection of the body-organism (you). The brain is a creature of evolutionary development. It acquired its tricks of trade through several hundreds of millions of years. Like a renovated house with more rooms added upstairs utilizing the same old type of building material without demolishing the existing structure, the brain too has grown adding new layers over the pre-existing structure using the same old building materials (neurons) with no revised or new design versions.

The older part of the brain structure (the basement and lower floors), however, got perfected in the art of living for the moment on a ‘here and now’ basis.  The lower levels served us particularly well in our primitive living conditions in caves or in the wilderness where we never knew to which beast we could have possibly become dinner the next moment.  Because the lower part comes with the proof of its reliable service through millions of years of evolution, we continue to keep it even today. The neuronal circuits in it are time-tested and are quite stabilized.  Therefore, they function as if on autopilot in preserving and protecting the organism without the need for ‘our’ conscious intervention.

The circuits in the higher brain where the cognitive and meta analysis capability exist are still not that much debugged because they have not had, as yet, enough time, in an evolutionary sense, to be error-free. Occasionally the lower brain accustomed to our primitive life in a jungle and the higher brain with learned urbane etiquette come into conflict in their decisions.  One within you says, “Hit the fellow in the front.”  The other says, “Behave yourself or else!”

Well, we feel as if we have two minds.

Daniel Kahneman got a Nobel Prize for his work in deciphering  how the brain works with two minds in decision making. He says there are two streams of thought – slow and fast. You may watch here some of the tricks the brain resorts to in the two main systems of Fast and Slow Thinking (about 4 min Video):

Neurologist Dr. M.E. Raichle found over a decade ago that the neuronal circuits in a our brain when resting without any specific job (idling) were different from when we are engaged on a specific task. The former is called the Default Mode Network (DMN) and is receiving greater attention of the researchers these days. 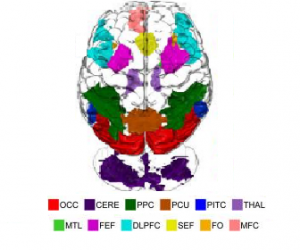 A study in Sept 2013 demonstrated that many brain areas are involved when we think in new ways “imaginatively.”  Supposed we are asked to imagine ‘a bumblebee with the head of a bull.’ It requires the brain to construct a totally new image and make it appear in our mind’s eye. Eleven different areas of the brain were seen to be engaged in this activity (See the figure to the right).

A couple of years ago, the Neuroscientist and Buddhist monk from New York, Prof. Zoran Josipovic, demonstrated that the two networks in our brain –  “the extrinisic-oriented Thalamo-Cortical Switch and the intrinsic-oriented Default Mode Network (DMN) tend to be negatively correlated with each other, with switching back and forth between them. His work further showed that non-dual awareness, as defined in the Tibetan Buddhist tradition, is clearly not like concentration. It appears to balance somewhat, the competing and antagonistic cognitive networks.”

My Question , therefore, is:  Are there two genre of thoughts – one the signature of the Universal Self and the other that of the delimited ‘self’?

Note:  The Cartoon at the Top is reproduced with the kind permission given by the Cartoonist Bradford Veley for use exclusively in this Blog Post.

2 thoughts on “Two Genres Of Thought”