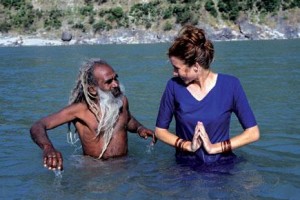 In this series I intend to post several short essays reflecting, from different angles, the topic of the month: adhikaritvam, the eligibility of the seeker. Along the lines I started in 2011 in Advaita Academy, I would like to point out the differences and similarities of Western and traditional Advaita – this month in respect of how to approach the students of both.

In Vedanta, the need for the preparation of the seeker is beyond question and the nine virtues of sAdhana chatuShTaya sampatti are considered to be prerequisites for anyone who wants to find a guru and embark on the path of knowledge. Not so in most Western Advaita where all this preparation is thought to overcomplicate matters.”

My own experience is that both viewpoints are right. Students should neither be challenged too much nor too little. This means that those who need preparation should be helped to prepare while slowly being lead beyond mere preparation, whereas those who are beyond preparation should find stimulus and challenge in their studies. But things are not that easy, at least not with Western seekers.

If you walk the traditional way, you first work on a karma yoga lifestyle (mostly while growing up and as a householder). By the time that your children are well on their way to independency you should have built a solid character foundation and be equipped with the nine virtues listed in chatuShTaya sampatti. You start to study Vedanta by attending classes with an expert in Vedanta (shravaNa) until you and your teacher feel that you have enough input and can start manana by questioning the guru on details of what you have learned.

I guess that this simple outline will, even in the Indian context, become increasingly less common. In the West, it does not exist. In the West, there is nothing like a value for svadharma. Yes, people may follow exactly what their parents did. But usually those are not the seekers that we find in the Advaita seekers’ context. To a greater degree, the Advaita seekers have already stepped outside the given contexts into which they were born. Moreover those contexts, at least in Europe, are less and less characterized by religion or at least firm values. Nowadays, it is much more common for everyone to pick and choose his own values and priorities. This means that the teacher cannot take anything for granted when someone approaches him for study. There is no solid foundation that he can count on.

Some students may seem pretty immature in some respects, given to all kinds of emotions, driven by addictions, unable to focus, prone to frustration, arrogant, immodest etc. On the other hand, they may know more about their true nature than some of those who have studied Vedanta for a long time and who lead an impeccable karma yoga lifestyle. This scenario, probably inconceivable in the traditional context, does happen a lot in the West. A seeker of this kind cannot be put in any drawer. If the teacher, rightly, considers the seeker to be someone who needs sAdhana chatuShTaya sampatti and asks him to work on that before any serious teaching can occur, the student will feel under-challenged intellectually and may leave. If you address him at the level of his insight into his true nature, he will feel happy – but he will make no progress because the foundation is missing. Whenever he meets an emotionally, socially or economically challenging situation, all his insights will suddenly be buried by his immature reactions. Even though the insights will not be gone for good and will be available again when the challenge is over, they will surely be buried again when the next challenge comes along.

Now, what is the teacher to do? I have found that for most of those kinds of seekers it is better to meet them intellectually first and, only after they crashed a few times, point out that what is needed for them is sAdhana chatuShTaya sampatti. As they are usually pretty bright, they are going to understand and, although they would not have acknowledged this to begin with, accept that they need to take the baby steps first. I have to add that my students have single consultations with me in the beginning and, only in later stages, meet in groups. I see or speak to them weekly, so I can follow their progress or failure pretty closely.

Of course the intellectual stimulus has to remain high, but usually these “advanced immatures” are very willing to work on the foundation and even start to enjoy the new challenge. Why? Because they can see what it is for. These seekers already know pretty well what the search is all about unlike beginners, who start with sAdhana chatuShTaya sampatti (because that’s what you do when you are a beginner). Therefore, those students are usually highly motivated to go beyond their limitations.