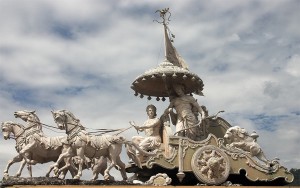 Regarding preparation the only difference I see between traditional advaita vedanta and Western advaita satsang teaching is: traditional teaching owns up to the need for preparation whereas Western teaching usually doesn’t. Yet most Western teachers are constantly occupied with working on the preparation of seekers. The talks published on their sites and even more those that are made into DVDs or CDs, must not deceive one.

Naturally what you see or listen to is the crème de la crème of the seekers. Visiting Western Satsangs “live” you do come across those bright, mature or even awake visitors that you know from the CD at home; but there will be quite a few absolute beginners as well who you wonder how they found their way into a gathering to do with advaita at all. Also talking with many of the seekers afterwards will reveal that the understanding did not go very deep.

This is exactly the same with seekers attending classes of a traditional Vedanta teacher – if these classes are meant for beginners. Teachers like Swami Paramarthananda who is lucky enough to teach different level students in their respective classes will probably be pretty sure that he always finds the right tone for everyone. With a mixture of levels as in Western satsang meetings, it is impossible for the teacher to address everyone according to his or her adhikaritvam (eligibility, or level of maturity).

Western teachers tend to have one answer for all, offering the highest truth or something strongly pointing into that direction. Those who respond well to this offer are usually those with sufficient preparation, while those who do not respond will sooner or later leave. Why? They were simply lacking in adhikaritvam and have to go elsewhere for more preparation.

As advaita in the West is propagated as a direct approach where there is no need for preparation, neither Western Advaita teachers want to bother much with preparing seekers nor do they have many seekers who would want to be prepared. Still, as pointed out above, preparation inevitably does happen in the Western satsang context. And, although there is not methodology behind it, sometimes it is enough to help someone take the jump and become a true seeker of knowledge.

I don’t think that there is anything wrong with the approach of Western teachers who do not want to invest energy into preparation of students. Teachers are free to attract those who they can serve best. But to declare preparation of seekers an old fashioned and superfluous measure is arrogant or simply stupid. A teacher who himself has been a seeker before his (actual or supposed) awakening stating “The most effective way it (the mind) avoids awakening is to seek it” means things have not be thought through.

A non-striving or “still mind” is basically a buddhi mind, relatively unidentified, collected and sharp. Helping the buddhi “taking the reigns” is exactly what preparation is for. Just because realization happens in a moment of still mind does not mean that the mind should not have pursued the required knowledge (jnana yoga) beforehand. Quite the contrary. It also does not mean that there was no need to having worked on purifying the mind (karma/upasana yoga) – a cleared mind being a necessary prerequisite to gaining the understanding that dawned on it in that one moment of stillness.