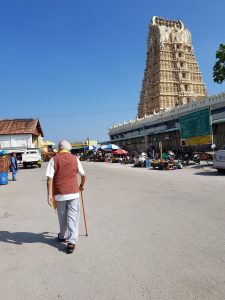 On the following morning, after breakfast in the hotel, Ravi took us to the magnificent palace of Mysore (it was rebuilt in 1897) where we spent the rest of the morning – well over two hours. One picture is worth one thousand words, so better not to try to describe what we saw and contemplated in awe while following a long row of visitors. The pavement of tiles was slightly cold and I had almost gotten over my viral throat infection, so I had to content myself with the thin socks I was wearing hoping I would not get a pneumonia (it did not materialize subsequently). We bumped into a group of teachers from Kerala which were exultant just for being there – quite apart from the contrasting colored lights reflected in glass in some of the rooms, and the splendor of the place itself. We also exchanged a few words with an elderly couple… everyone was happy. 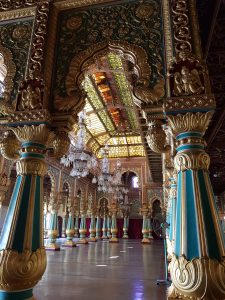 Before entering the palace I had bought a set of three flutes made of wood for a few rupees – the man selling them was making a nice sound with one of the flutes he was selling… perfect musical scales with all the notes! We had no time to see the marvelous display of flowers some rather long distance from us on the right of the palace. Will there ever be another chance? Hardly! 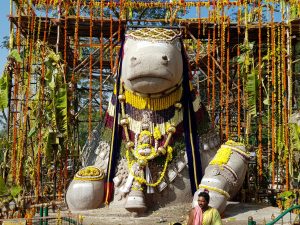 It must have been in the afternoon or early evening when my wife and I climbed to a hilltop – No, Ravi took us there – to see the Sri Chamundeswari Temple and the bull Nandi, Shiva’s bull (it had been carved out of a solid rock in 1659), quietly reposing and oblivious of the crowds that came to see him – many of the visitors were obviously more acquainted with the stories and legends (Puranas) recounting the comings and goings, deeds and undoings of these sacred animals, than we were.

Next day we were visited in the morning by Ramachandra Iyer, his wife, and Sowmya. It was time to say goodbye. I had never before prostrated myself at the feet of someone, man or woman, priest or commander, but this time I did (he anticipated me doing it in front of me!).