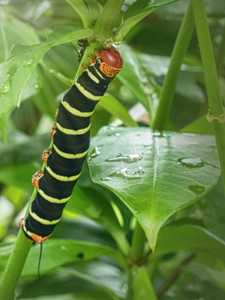 The original metaphor seems to come from the Taittiriya Upanishad. (It is also outlined in the Sarva-Sara Upanishad and the Paingala Upanishad.)

Here are some extracts from Swami Nikhilananda’s translation of the Taittiriya:

II.1.3.  From the Atman was born AkAsha; from AkAsha, air; from air, fire; from fire, water; from water, earth; from earth, herbs; from herbs, food; from food, man. He, that man, verily consists of the essence of food. This indeed is his head, this right arm is the right wing, this left arm is the left wing, this trunk is his body, this support below the navel is his tail.

II.2.1. Verily, different from this, which consists of the essence of food, but within it, is another self, which consists of the vital breath. By this the former is filled. This too has the shape of a man. Like the human shape of the former is the human shape of the latter. prANa, indeed, is its head; vyAna is its right wing; apAna is its left wing; AkAsha is its trunk; the earth is its tail, its support.

II.4.2. Verily, different from this sheath, which consists of the essence of the mind, but within it, is another self, which consists of the intellect. By this the former is filled. This too has the shape of a man. Like the human shape of the former is the human shape of the latter. Faith is it head, what is right is its right wing, what is truth is its left wing, absorption is its trunk, Mahat is its tail, its support.

II.5.2. Verily, different from this, which consists of the essence of the intellect, but within it, is another self, which consists of bliss. By this the former is filled. This too has the shape of a man. Like the human shape of the former is the human shape of the latter. Joy is its head, delight is its right wing, great delight is its left, bliss is its trunk. Brahman is its tail, its support.

It is interesting to note that the word ‘kosha’ does not appear here, however. The terms annamaya, manomaya etc are used and there is reference to earlier levels ‘embodying’ the later ones or to later ones ‘filling’ the earlier – but no mention of ‘sheaths’.

The method used here is to direct our attention to increasingly more subtle levels so that, although we may not appreciate what is meant by the Atman initially, we do by the end. I described this method in ‘Back to the Truth’:

This method, whereby the teacher directs the student from his initial identification with something gross on to increasingly more subtle levels of understanding, is called sthUla arundhatI nyAya. It is the clearest example of the Advaitic method of teaching. nyAya means logical argument. arundhatI is the Indian name given to a star, Alcor, in the constellation of Ursa Major (Great Bear, Plough or Big Dipper). In marriage ceremonies in India, the star is pointed out to the bride as an example to be followed, since the star is “devoted” to its companion star, Mizar or vAsiShTha (arundhatI was the wife of vAsiShTha). Because the star is scarcely visible, it is necessary to lead the eye to it gradually. Thus one might first locate the constellation by reference to the moon. Then the attention can be directed to the bright star that is at the tail of the Great Bear. Finally, there is a companion star which is only 11 minutes distant and fourth magnitude that can only be seen by people with exceptional eyesight. This is arundhatI.

In the same way, the taittirIya upaniShad first points to the body as being the Atman but then indicates that the vital energy is more subtle and the body is, after all, only food. In this way, the disciple is guided through successive levels until he is able to recognize his previously mistaken identifications and understand his essential nature.

The Sheath metaphor is effectively a subset of the more general Atma – anAtma viveka, the differentiation between Self and not-Self, or dRRigdRRishya viveka, the differentiation between the seer and the seen; the ‘net neti’ of the Brihadaranyaka Upanishad. It is also an example of the principal method of Advaita – adhyAropa – apavAda. First we are told that we are the body. This is then shown to be an erroneous superimposition due to ignorance and that explanation is taken back. Then it is said we are the life-force, prANa. Then that is shown to be wrong and rejected. And so on until we finally appreciate that we must be the Atman.

Swami Dayananda, when explaining this process, also uses the same analysis for Ishvara so that, when all of the ‘coverings’ have been shown to be mithyA, we are left with the inescapable conclusion that my Self and Ishvara must be the same – tat tvam asi. Both resolve into Brahman.

The model is dealt with in more detail, and in a much more approachable manner, in the Vivekachudamani from verse 156 – 213 (or thereabouts – there is a discrepancy of one or two amongst the many translations and commentaries of this work). And now the word kosha is actually used. For example: “The prANa endowed with the five organs of action forms this prANamaya kosha…” (Verse 167).

It begins with the Food Sheath (in the translation by AJ Alston):

Shankara comments on the above section: “The individual soul, though intrinsically none other than Brahman, still identifies itself with, and becomes attached to, the sheaths made of food etc, which are external, limited, and composed of the subtle elements.” (Swami Gambhirananda translation) And he refers to the Tenth Man story, where the ten men swim across the river and think that one of their number has been lost because each forgets to count himself. In the same way, “the individual soul, under a spell of ignorance characterized by the non-perception of one’s own true nature as Brahman, accepts the external non-Selves, such as the body composed of food, as the Self, and as a consequence, begins to think, ‘I am none other than those non-Selves composed of food etc.”

In practice, of course, we do not consciously identify with the sheath itself but with one or more attributes of them. Thus, for example, we claim that ‘I am fat’ or ‘I am ugly’, effectively identifying with the body or food sheath; ‘I am stupid’, when referring to the mind or intellect. The Self is never really associated with these attributes or the sheaths themselves because only the Self is real – the rest are mithyA. Failure to understand this leads some teachers to claim that we need to ‘get rid of the mind’ or ‘destroy the ego’ in order to achieve realization. This is like saying that we have to kill the snake in order to discover the rope.

Shankara says that each successive sheath takes the human shape of the food sheath, like pouring liquid into a mould when casting an image. The word ‘maya’ in the names given to the sheaths means ‘made up of’ or ‘modification of’. The first level of identification is with the body, which is only a modification of food. So even the bliss sheath still belongs to the realm of effects. Each successive sheath is subtler than the previous and ‘pervades’ it. But beyond (or ‘inside’) them all is the true Self, which is the cause of the elements constituting the sheaths but is itself eternal and changeless.

But perhaps the best translation of kosha is the chrysalis or outer casing of a pupa. The word chrysalis comes from the Greek  khrusallis, (khrusos means ‘gold’) because of the gold colour or metallic sheen of some pupae. The Sanskrit for chrysalis is koshakAra – the caterpillar actually makes the casing itself (kAra means ‘making’ or ‘doing’). I.e. it effectively constructs its own prison. And so do we, when we identify with the body and mind! But the pupa is not the casing, just as the body is not the Self. But the metaphor should not be taken all the way – the body does not actually encase the Self in the way that the outer shell of the chrysalis covers the caterpillar as it metamorphoses.  (Although there is another nice parallel here, in that it is said that the jIva can only attain enlightenment in the body of a human.)

It should be noted that the Taittiriya Upanishad itself stops its descriptions of the successive ‘selves’ with the Anandamaya kosha. There is therefore the implication that this is the ‘highest’ Self, i.e. that it is not itself a ‘covering’ of something further. This doubt is raised in the Brahma Sutra Topic 6 (Anandamayo.bhyAsAt – I.1.12 – 19). The doubt raised is that Anandamaya cannot be the paramAtman because it has the form of the body, has parts (head, tail etc) and has joy, whereas the Self is formless, partless and limitless. The sutra concludes that it is Brahman, because Ananda is repeatedly uses as an ‘indicator’ or ‘characteristic’ of Brahman. The Taittiriya concludes that ‘Ananda is Brahman’ (II.6.1) and the Brihadaranyaka says that ‘Knowledge and bliss is Brahman’ (II.9.27) so the ‘Self made of bliss’ must be Brahman also. It is the most subtle in the series of increasing levels of subtlety pointed out in the metaphor.

Shankara disagrees and states that Anandamaya is not Brahman but the last of the five sheaths. It is the ‘causal body’ for the other four. We enjoy bliss in deep sleep but we are clearly not ‘united’ with Brahman because we return to ordinary waking afterwards.  Anandamaya is the fluctuating bodily enjoyment or ‘reflection of’ the real Ananda, whereas Ananda itself is Brahman.

The Self is the ultimate ‘support’ for all of the sheaths, with which we erroneously identify as the result of ignorance. As Shankara puts it: “That very non-dual Brahman, which is the farthest limit of all negation of duality superimposed by ignorance, is the support (of the blissful self), for the blissful self culminates in unity. (It follows therefore, that) there does exist that one, non-dual Brahman, as the farthest limit of the negation of duality called up by the ignorance, and this Brahman supports (the duality) like a tail.” When all of the anAtman has been rejected (neti, neti), what remains is the ultimate subject – Brahman. II.vi.1 of the Taittiriya puts it: “If anyone knows Brahman as non-existing, he himself becomes non-existent.”

In the final part, I look at the Panchadashi presentation and at a much clearer description of the metaphor from Swami Paramarthananda.