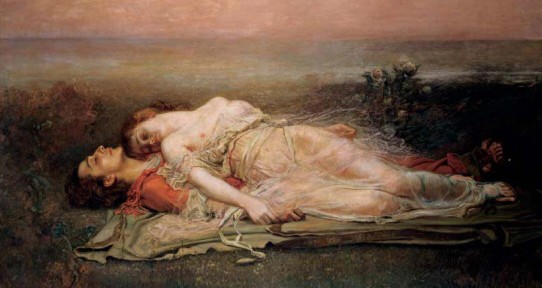 The power of the feminine principle (Shakti, Prakrit-Nature): Creation, Life, Nurturing – and its cycles. Also representing desire, as well as beauty. Woman, however, (embodiment of the Goddess) can also be redemptress (e.g. Mary in Christianity).

In Wagner’s opera ‘Tristan und Isolde’, desire is linked with Life, and Love with death –  sacrificial death (Liebestod), which admits of multiple implications and interpretations. The Romantic hero – and Wagner was one, at least ideally – could only be redeemed by and through woman; in that opera love could not be fulfilled in earthly terms (for it was unlawful). The Romantic ideal was a combination of love, sacrifice, transcendence, union – union through the transcending of the human personality, of individuality itself. Is this not a universal theme, as well as being very German?. In Wagner’s own words, “What Destiny separated in life emerges as life transfigured by death”.

Thus, Liebestod – ‘love death’ – is the central theme in this opera. A theme that reverberated through European culture from the time of the Romantic revolution –  especially German Romanticism (Fichte, Schelling, etc.) – beginning in 18th Cent. in Europe. It was a movement away from what was Christian Europe up to that time, and also against the classical model of the Enlightenment. A revolution of feeling – emotional and aesthetic – intent on selt-discovery and having as a goal, to repeat, nothing less than Infinity as opposed to finitude. This tragic, sacrificial  love was the theme for both hero and heroine, the latter – and especially in the case of Wagner – acting as a redemptress. Thus, redemption through Love, death being its prerequisite and unlikely complement.

The story of the original legend was much earlier (2nd half of the 12th Cent.). Here is its presentation at that time by an important witness: “Before now many have told the love story of Tristan and Isolde, but none have done so more faithfully than Thomas, and it is primarily his authentic version that I, Gottfried, follow in presenting to all noble hearts the following tale of love, sacred yet forbidden, healing yet destructive, fulfilling yet frustrating, tyrannical yet benevolent. All with noble hearts will understand. May this tale enhance their minds, enrich their lives, and fortify their love.”

Duality and opposition are the fabric of life seen from a conventional viewpoint. In that opera we can easily identify the governing principles suggested above, which are being deployed by the author-composer-librettist as actual or real opposites: love-desire; death-life; night-day; longing-desire; destiny-will; self-denial–self-affirmation; redemption-suffering; union (rebirth)-separation; reality-illusion; Goddess-woman. A rich tapestry of motives and possibilities.

If we imagine a spiral and start with ‘desire-attraction’ at the beginning centre-point, we end up – through ‘life’ – to ‘separation’ on the outside end. Contrariwise, if we start with ‘love’ at the outside beginning, we end up – through ‘death’ –  with ‘union’ at the inmost point. From the spiritual view of things, what is most significant in Wagner’s recreation of that Medieval legend – and towards which he was, consciously or subconsciously, aspiring – is precisely loss of the ego, of the personality.

“Never in my life” – Wagner wrote – “having enjoyed the true happiness of love I shall erect a memorial to this loveliest of all dreams in which, from the first to the last, love shall, for once, find utter repletion. I have devised in my mind a Tristan und Isolde, the simplest, yet most full-blooded musical conception imaginable, and with the ‘black flag’ that waves at the end I shall cover myself over – to die.”

In his mature years, Wagner described Tristan as a kind of pilgrimage, an expression of how to reach out beyond the world, the flesh and the devilish itch of sexual desire, to the pure realm of the spirit. This is something that has been lost sight of by many commentators and critics of that opera – and of Wagner himself –  and is by and large the most important dimension when thinking of talking or writing about love, desire, suffering, yearning or longing…

Apart from the role woman played in Wagner’s spiritual aspiration and interiorization, and confluent with it, was the influence that Buddhism and Brahmanism via Schopenhauer ‘s philosophy exerted on him. He wrote: “The life of man is a continual slaying of the self… Death accordingly is the most perfect deed of love: it becomes such through our consciousness of a life consumed by love”.