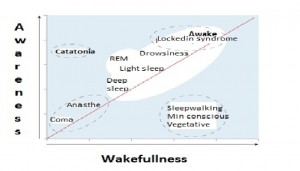 brains that are deeply asleep, under anesthesia or in comas to understand consciousness. As shown in the figure at the right, “awareness typically tracks with wakefulness — especially in normal states of consciousness. People in coma or under general anesthesia score low on both measures, appearing asleep with no signs of awareness. Sometimes, wakefulness and awareness become uncoupled, such as among people in a persistent vegetative state. In this case, a person seems awake and is sometimes able to move but is unaware of the surroundings.”

Consciousness is also being studied in relation to the gamma wave activity of the brain – the 30-90 cycles per second seen in an electroencephalograph (EEG) produced by the synchronized activity of the brain cells. But there is a bit of controversy around this because gamma activity was found to increase in some anesthetized patients, though consciousness was clearly diminished.

Neuroscientist Anil Seth of England thinks that “consciousness might turn out to be a collection of remarkable phenomena” much like life which defies a single definition and involves many aspects of the functioning of a living organism like growth, reproduction, a healthy metabolism etc. Dr. Ralph Adolphs of Caltech also holds that “conscious experience is not one little interesting phenomenon. It’s literally the whole world.”

Much of the neuroscientific work so far did not distinguish consciousness and attention. For example, if our attention is diverted, obvious things escape our detection; we will not be conscious of them. We need to separate the effects of attention in order to be able to understand consciousness, as asserted by neuroscientist N. Tsuchiya of Australia.

It is now mostly agreed that “attention can occur in the absence of awareness. But evidence for the opposite idea, that conscious awareness can exist without attention, has been less clear. Some studies suggest that a person can report the gist of a scene — describing whether it’s a library or a garden, for example — even when a huge chunk of attention is siphoned away by a demanding task. It could be that attention and consciousness may each have its own role in the brain. Consciousness may be a synthesizer that merges bits of information into a broader picture. ”

It is increasingly recognized in Neuroscience that there is a clear Perception-Reality disconnect.  As Dr. Meyer puts it, “What we’re conscious of is what the brain makes us be conscious of. While the images we experience may be influenced to a certain degree by information that’s incoming, we need to get away from the idea that they reflect exactly what’s out there.” Moreover, bits of memories stored in the brain project a scene before us even in the absence of incoming signals from outside world as it happens when we imagine things or when we are lost in a dream world. “That tells us that your brain, in the absence of any outside input, can generate this movie that appears totally realistic to you,” Meyer says. It is a “remembered present”, as described by Nobel laureate and neuroscientist Gerald Edelman. The entire world can get created in a blink!

During a moment of introspective reflection, Dr. G. Tononi observed that “Each split second of awareness is a unified, holistic experience, completely different from any experience before or after it.” Based on this finding, he constructed a new theory of consciousness. His former mentor and well known Neuroscientist, Prof. C. Koch supports the theory.  Prof. Koch feels that a study of the changes in the brain “when consciousness comes or goes cannot provide a full explanation of the mysterious process from which conscious experience emerges.” Dr. Tononi says that both information and integration describe what consciousness actually is. A measure to calibrate these two components in a system is being developed so that the predictive capacity of his theory can be tested in a laboratory.

Scientists like Dr. S. Hameroff proposed that consciousness evolved when a minimum required number of neurons developed in an organism to give it an evolutionary advantage. He cites the explosion of life forms during the Cambrian Period (about 550 million years ago) in support of his claim. On the other hand, Dr. Koch says, “Consciousness is not an emergent feature of the universe. It’s a fundamental property.”  He thinks that, “consciousness is something inherent in the fabric of reality that gives shape, structure and meaning to the world.”

It is increasingly being realized that “consciousness is a truth of a sort that can’t be comprehended within a system of molecules and cells alone.”

Medicos have their own working definition for consciousness, though it is difficult even for them to categorize who is truly in a vegetative state when it comes to edge cases. A recent report by Dr. T. Bekinschtein and others showed how a patient supposed to be in a vegetative state has exhibited a remarkable capacity “to learn”, thus establishing that consciousness is present in the patients even under vegetative condition.

“Loss of response to painful stimuli and loss of consciousness are the most striking characteristics of surgical anesthesia and anesthesia-like states, such as concussion, reversible coma, and syncope (fainting). These states also exhibit behavioral suppression, 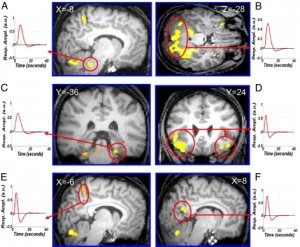 loss of muscle tone and depressed brain metabolism.”  The EEG pattern under anesthesia shows a shift to the sleep-like “delta-wave.” Anaesthesia is a pharmacologically induced coma,” Dr. A. Owen says.

Dr. Wong, a surgeon says that a patient under anesthesia can oftener be conscious but cannot express because his/her muscles are paralysed/too relaxed and do not move under his/her command.

So we can reasonably say ‘consciousness’ exists even under anesthetic and comatose conditions thanks to the modern brain scanning techniques.

Is this consciousness that we see in various scanning techniques Brahman?

Sure It is – can there be any ‘other’ which is not Brahman? We are Advaitins!

But seriously, the word “consciousness” that Neuroscientists and Medical Professionals talk about and what Advaitins write with a capital “C” may connote (or point to) different things.