Recently there was an interesting question about the disappearance of ‘me’ when a patient is administered anesthesia in preparation for a major surgery.  It is quite intriguing where the missing ‘self’ has gone and when under anesthesia (Q. 313).

Peter, Sitara and Dennis answered the question very ably explaining the Vedantic philosophy behind the various states of consciousness (as we usually understand the term).  The false concept of the sense of a separate ‘self’ we think we possess and the reality of an eternal Self; the misunderstanding that arises if we take the word Consciousness to mean the same in psychology (& medicine) and Advaita;  the possible existence of multiple ‘minds’ which derive their illumination from an unchanging, everlasting, self-effulgent One Brahman were dealt with by them. Hardly can anything be added to their clear exposition made from the stance of Non-duality beyond saying a word of our appreciation and gratefulness to them.

I would like to use this opportunity, if I may, to bring to the notice of a wider audience an approach I developed in 2004 relating the state of our alertness to our body-mind system in order to understand who we really are. We shall also in the process examine what are Deep Sleep and Death and what is the condition of the brain under different states, including awake, dream, deep sleep, death, coma, anesthesia etc.

Let me call this as “A Model for Nirvana.” 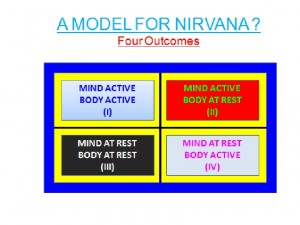 We think we are the physically visible body and also the invisible mind and sometimes we do not know which one of them is the “me.”

What we call our Body is actually an ensemble of different organs and limbs.

Our mind is the ensemble of all our thoughts, feelings, ideas, images, emotions, qualia etc.

Though Science tells us that the mind is non-different from what goes on in the brain (see:  Mind Reifies Or Deifies), let us for the present analysis assume as if the body and mind are two different entities.

The two entities, viz. mind and body, can be either in alert or active state or in inert or restful state.

The two entities and the two states can give rise to four outcomes by combination.

The four outcomes are (see the figure above):

I – Wakeful State when both the mind and the body are present and active.

The brain shows an activity in the 13 – 40 Hz in an EEG. These Beta and Gamma waves represent what we call a conscious state, when the brain interprets the neural firings in conjunction with sensory inputs to give raise to a meaning to our perception.

II – Dream State when the body is at rest and the mind is active.

III – Deep Sleep when both the mind and the body are at rest.

Brain’s activity is at 0.3 – 3 Hz level, called Delta waves.  Neural firing occurs in disconnected islands, synaptic activity is reduced, and there is also a reduction in the free radical generation. Hence a feeling of rest comes.

[Depending upon how intense is the inactivity in the body and brain, it can be coma, vegetative state, or death.   “A coma is a state of unconsciousness in which the eyes are closed and the patient cannot be roused. A vegetative state is a condition in which the eyes are open and can move, and the patient has periods of sleep and periods of wakefulness, but cannot reason or respond.  Anesthesia is a pharmacologically induced coma.”  Syncope (swoon) is an anesthesia-like state.  If the cells in the brain become inactive totally either because of a lack of supply of oxygen or glucose, it is the death of the brain.  The brain cells cannot recover their activity again after such an event.]

IV – What is this possible fourth outcome when the body is present and active but mind is not active?

Does this fourth position also occur as easily as the other three without any special effort?

We can surmise that a sense of a distinct “individuating me-thought” will be absent and hence no ego will exist in this state because both the mind and thoughts are absent.  How does the body then function and what primes its activity?

What is it that is present and guiding the body in its normal activity when the mind is not there?

In order to meaningfully answer these questions, a detailed analysis of the deep sleep state is necessary. Aitareya, Taittiriya, Mandukya and other Upanishads consider the deep sleep state as a ‘seed state’ giving raise to the other two states, viz., the dream and wakeful state.  Atmananda Krishna Menon and his students developed the “Direct Path Approach” to Advaita basing themselves on the analysis in Aitareya Upanishad. The more traditional schools following Sankara go by the Taittiriya and Mandukya Upanishads.

We shall now look into deep sleep.

But before we go into it, a word about the robustness of the proposed model for Nirvana.  The following exchange of mails shows how the model is useful in understanding various phenomena.

A question was raised by one of the readers in August, 2011 on the applicability of the Model in the case of people who attained certain miraculous accomplishments (siddhis).  His Question was:

“I met two individuals – one sometime during 1958-62 at Kashi and another in June 1971 in Lucknow, India. In both the cases I observed that for short durations during the conversation the shine in their eyes reduced for some moments and the body became practically motionless. On “return” from their trance, both of them used to tell about some happenings going on at some other place or predict what would happen in future. Their predictions were found to be correct subsequently. Sir, where does their state fit in your model for Nirvana?”

Here is the reply I gave to him:

“The body of the two persons had become motionless and the alertness in their eyes was reduced. But they narrated subsequently things which they witnessed somewhere else in time or space. From these observations, we can conclude that they were still witnessing some activity with their mind and carried a memory of it in order to be able to tell you. Now applying the model, we can see that their BODY is at REST but MIND is ACTIVE. Hence it would fit into the second quadrant (top right in the Figure) – the Dream State (swapna avastha).

The surprise, however, lies in the fact that the event described by that person seems to take place at a different time and space compared to where you both were while conversing. We call it premonition / clairvoyance etc. on the part of that person.

The long story of Sage Gadhi elaborated in the Upasamana Prakarana of Yogavaasishta is based precisely on this aspect. The Sage visualizes some events during a stupor while having his bath in a pond. The very same events are narrated to him by another saint who visits him as a guest much later. So Gadhi thinks that it was not his imagination during the stupor but some things did really happen that way. He goes for a groundcheck by physically traveling to all those places which he witnessed during his torpor. To his surprise, he finds physical evidence too for the events and places! He gets totally confused and confounded. He prays to Lord Vishnu and requests Him to explain the phenomena. Vishnu calls it all as maya. A fuller explanation of maya is given in the last chapter of Yogavaasishta (Nirvana Prakarana). The point made is that maya cannot be understood by exploring it. It can be understood only by transcending it.

The long and short of the story is, mind can play many tricks, show us some things as our experience though we never experienced them by ourselves, rub other’s experiences on us to the extent we believe them to be our own and so on. For a man who is completely immersed in realizing Truth (Brahman or Self) i.e. mumukshu, these things are of no interest.

Thus the state of the people when they were in such a trance is neither deep sleep (sushupti) nor Turiya.

Having said all the above, I have to admit that I do not really know how some people get these skills of clairvoyance etc. One of Patanjali’s sutras says that such things are obtained by inheritance, using medicines, gems, special prayer etc. But Patanjali also says these are of no concern or value for Nirvana.”