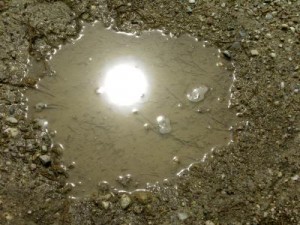 If now our happiness consisted in doing, I mean choosing, greater lengths and avoiding smaller, where would lie salvation? In the art of measurement or in the impressions made by appearances? Haven’t we seen that the appearance leads us astray and throws us into confusion….?  Plato – Protagoras, 356 d.

Eikon (image or appearance) is a versatile concept in Plato’s usage, always referring to the external or material – temporal, finite – world (1), as against the ideal – eternal, infinite – one. Eikon is either an image of an image, such as reflections in water or polished surfaces, or the material objects themselves. These latter are images of the only reality there is, that of eide (Ideas or Forms) – the ‘Intelligible world’, the former one being the ‘Sensible world’ – that of appearances or phenomena … (1) Elsewhere time is seen as an ‘image’ of eternity.

(From an unpublished article)   Gitti@pixelio.de (photo)

1 thought on “Appearance versus reality”