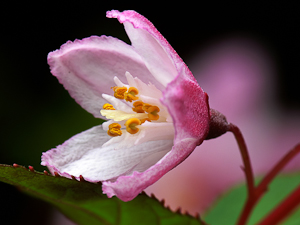 (Although I did not have it in mind when I began this blog, I should mention here in case anyone is not already familiar with it, that this is a frequently encountered metaphor for the change that occurs upon self-realization. Just as we recognize the truth of heliocentricity, yet still talk as if the Sun revolved around the Earth, so the realized man still acts as though he lives in a dualistic world, even though he now knows that everything is Brahman.)

Belief is so often treated by the believer as if it were true knowledge, instead of simply a strongly (and often wrongly!) held opinion. We really ought to know better, given the history of such mistaken, scientific views as the theories of phlogiston and ether. If the most brilliant scientists can be wrong, so can we!

One of my favorite books – ‘The Hundredth Monkey’ (Ref. 1) – includes a chapter on studies relating to the belief that people’s behavior is influenced by a full moon. What these studies find is that people are selective in what they observe. They tend to notice things that support their present beliefs and, whenever they see something unusual, they tend to try to find an explanation. Thus, if someone is seen to be behaving in an abnormal manner and it is noticed that the moon happens to be full, the latter is likely to be used to explain the former, in the absence of any more rational explanation. Such ‘rationalizations ‘ may become so glib, that in an appropriate situation, we may not even bother to check the phase of the moon at all. And, of course, we will recall those situations when something unusual occurred and it happened to be a full moon, but we will fail to remember the many more situations when either it was a full moon and everything was perfectly normal or it was not a full moon and people were doing the most stupid things!

Many of our beliefs stem from childhood. We are told something by our parents (who, of course, were told this by their parents!) and, not knowing any better, and trusting them implicitly, we accept it. If this happens to be something that does not fall within the purview of education, it is very likely that we will reach adulthood still believing what we were told. This is the field of folklore. Thus, for example, we might be told: “don’t go out in the cold with wet hair or you will catch your death of cold!” And we believe it! That there is no scientific evidence whatsoever for such a claim is irrelevant. The most pervasive belief of this kind is one’s religious persuasion. If the Muslim child is brought up as a Christian, he will believe in Christianity – and vice versa. The desirability of applying reason to one’s beliefs rarely occurs to us. As Robert Bolton said: “A belief is not merely an idea the mind possesses; it is an idea that possesses the mind.”

Ultimately, it could be said that “we believe whatever we want to believe”, as the Greek statesman, Demosthenes said. Osho has a good joke to illustrate this (in his book ‘I Am That’, Ref. 2). A man was driving home from work one night in the pouring rain when he passed a young woman struggling with some shopping. He stopped and offered her a lift. When they got to her house, she invited him in for a coffee. One thing led to another and eventually, they ended up in bed making love. Much later, he got up to return home realizing that his wife was going to be demanding a good explanation. By the time he arrived home he had worked out what to do and he took a piece of chalk from the glove compartment and put it behind his ear. As soon as he entered the house, his wife loudly demanded to know where he had been all of this time.

“Well, darling,” he began, ” I stopped to give this girl a lift home. She invited me in for coffee and then we went to bed for a couple of hours.”

“I’ve never heard so much rubbish,” his wife replied. “I know perfectly well what you’ve been up to. You’ve been out with the boys playing pool again; I can see that chalk behind your ear!”