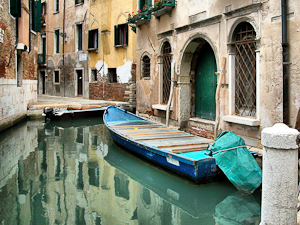 Continuing the reposting of blogs from Advaita Academy, here is one from 2010. It is interesting to note that I have not further encountered this word since then! So it was a one-off. Nevertheless, it remains an interesting one and has a useful message.

I encountered a new Sanskrit word recently and its use and interpretation are quite enlightening. No doubt we are all familiar with those statements in the Upanishads which extol the extreme virtues of brahman. For example, in the Katha Upanishad, we have “the self is lesser than the least, greater than the greatest” (I.ii.20). And in the Isha Upanishad, we have “Unmoving, it moves faster than the mind” and “unmoving, it moves; is far away, yet near; within all, outside all” (verses 4 and 5). (These quotes are from ‘The Ten Principal Upanishads’ by Shree Purohit Swami and W. B. Yeats – a poetic rendering.) Then again, in the Kaivalya Upanishad (v.20), it is said “I am smaller than the smallest; I am the biggest, I am everything…”

These apparent contradictions are intended, of course, to break down our tendency to try to define that which is indefinable. I suppose you could think of it as the advaitic equivalent of the Zen koan. By presenting us with something which, on the face of it, does not make sense, we are forced to think laterally. And there is then a possibility that our minds may leap to a new understanding.

In the muNDakopaniShad (3.1.7), it is said about brahman that it is ‘subtler than the subtlest, further than the furthest and yet near at hand’. The Sanskrit phrase for ‘further than the furthest’ is dUrAt sudUre. The word dUra means ‘distant, far, remote (in time and space), a long way off or a long time ago’. So brahman is even further away than a very far place. The message here is that there is no point in trying to get there. The seeker who is searching for brahman is never going to find it, no matter how far or for how long the search takes place. But brahman is near and is also limitless; there is nowhere where brahman is not. This is like the metaphor of the lady who has lost her necklace. I do not need to look for brahman because I am brahman. Indeed, as long as I am looking elsewhere, I am not going to find it.

Unfortunately, this does not mean that I simply need to stop seeking. If I do that before I have genuinely realized the truth, then brahman effectively remains ‘farther than the farthest’. It is not that I have to go anywhere, but I do have to acquire this knowledge. Similarly, brahman is not something to be reached in the future – I am brahman now; it is just that I do not realize this. If I wait for it to happen in the future, I will be waiting for ever. It is not that I will become brahman; it is that the mind will appreciate that this is an already existent fact. When this happens, this event is called enlightenment.

Moreover, it is not a question of acquiring facts in the way that one might learn chemistry for example. Brahman is not objective knowledge and has no attributes for one to discover. It is not anything that can be known; it is that by which everything else is known. It is your Self, here and now.