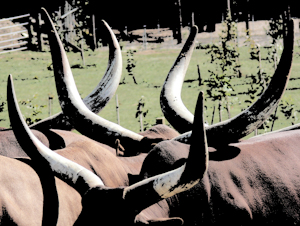 If you enjoy wildlife television programs, and you live in the UK, then you’re probably watching ‘Secrets of our living planet’ presented by Chris Packham. If, on the other hand, you’re not particularly interested in wildlife programs, you really ought to give this one a look because it is not the run-of-the-mill type. (And if you live outside the UK, watch out for it because it is almost certain to be in your area soon.) In fact, it is actually about ecosystems and some novel connections are highlighted, which you will almost certainly not have heard of. These have something of the ‘wow’ factor of those books by Lyall Watson, such as ‘Supernature’, although this series seems to be grounded in genuine scientific observation.

The first program looked at the unlikely connection between the Brazil nut tree, an exotic orchid, a species of bee (both sexes) and a small rodent with very sharp teeth.

The rainforest is an extremely complex environment with very many differing species, often with complex interdependencies. Because species have evolved in parallel, in close proximity, they have constantly had to develop new strategies for survival. Thus, a tree might synthesize poisons in its leaves but then the insect or animal that eats those leaves will itself evolve to produce special enzymes to digest the poison, and so on. And, because all of the predators of a particular tree will inevitably live close by, the tree must develop strategies for transporting its seeds to different locations.

Thus, in this particular example, it turns out that the Brazil nut depends upon all of these other species for its existence. The nut that we eat is actually contained in a much larger and considerably tougher structure. A single pod actually contains many Brazil nuts. Once it falls to the ground, there is only one animal around which is capable of breaking through the outer layer with any efficiency to reach the protein rich nuts. This is a large rodent called an agouti. Its behavior is rather like that of a squirrel in that, since there is too much to eat immediately, it carries off some of the nuts to bury elsewhere for those times when food is scarcer. Inevitably, a few of these are never recovered, eventually germinate and grow into new trees.

So far, so straightforward, but before the nuts can form and fall, flowers must be pollinated. And, just as the nuts of the Brazil tree have evolved to be exceptionally tough, so have the flowers! It seems that only the female of a particular species of bee, is strong enough to prize open the petals to reach the nectar and thereby pollinate the plant.

But the story is not finished yet. In order for there to be female bees, there must also be the male variety. As you will no doubt know, the males of many species do peculiar things in order to attract the female! In this case, the male does not rely upon its own pheromones but utilises the scent of a particular orchid. Instead of visiting the flower for its nectar, it rubs its body over the flower in order to collect the scent.

We now have the unlikely combination of dependencies. If it were not for the orchid, it seems probable that this species of bee would quickly die out. If not for the bee, the Brazil would not be pollinated and there would be no nuts. Without the agouti, the seed would not be propagated, and any developing plants in the vicinity of the parent would quickly be predated. So, as these have all evolved, the agouti too effectively depends upon the orchid and the bees for its survival.

But it struck me while watching this program that it ought not to be surprising that these interdependencies have arisen. It is, after all, only at the level of vyavahAra and what we are talking about are only names of particular forms of brahman. If we think of the explanations of mithyA (see http://www.advaita.org.uk/discourses/definitions/mithyA.htm, http://www.advaita.org.uk/discourses/definitions/mithyA2.htm and http://www.advaita.org.uk/discourses/definitions/advaita.htm, we realize that anything at all is not in itself real but is dependent upon something more basic for its existence. Even science claims that everything evolved from the same single-celled organisms, themselves developed from fundamental proteins created by chemical combination of simple inorganic compounds, maybe following a lightning strike.

Physically, all living beings are made of the same stuff, the material cause of which is Ishvara. Essentially, all is brahman. Forms come and go; new species come into existence while old ones die out. Of course, it may well be true that mankind is bringing some species to the brink of extinction and that this may upset an entire ecosystem. (Another episode of the program showed how the rhinoceros is responsible for restoring the grasslands of so-called ‘sour grass’, which nothing else can eat. Since it is such a large animal, it has to eat enormous amounts of this grass to obtain any nourishment. Its vast quantities of dung are subsequently broken down to reintroduce nitrogen into the soil and turn the grasslands into ‘sweet grass’. This then encourages the return of other animals such as impala, which in turn brings in the hunters such as lion. If poachers of the rhino horn bring that species to extinction, it is not the only one which will suffer in the long run!)

But all ecosystems are dynamic. As one species dies out, another gains ascendancy and the process goes on. Even should mankind, through its ignorance, bring itself to extinction, life will go on. The sun will eventually engulf the earth but even that is insignificant in terms of the entire universe coming to an end. There has never been any ‘creation’ but the manifestation of form is cyclical and the whole process will begin again. Gold recast into rings or bangles remains the same gold. jIva-s ‘recast’ into different bodies remain the same brahman. dharma requires that we be concerned about the issues raised by this program but let us not forget that this in the realm of vyavahAra only. As advaitins, our ultimate concern is the realization of the truth.