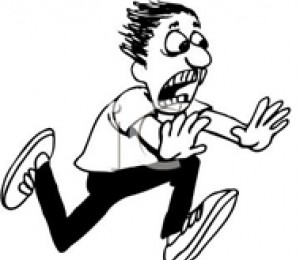 “I understand the Advaita teaching that everything is One only without a second, but I am always afraid of dogs and monkeys which are common in my place. Moreover, I also have a fear of snakes etc. as I live in a forest area.

Everything is brahman and therefore, ‘fear’ is also brahman.  Though my mind is convinced by the logic of Advaita, why do I suffer from various fears?”

If there is a perception of fear, it automatically implies that there is a ‘me’ as the ‘subject,’ the finite perceiver and there is the ‘other,’ an object, separated from ‘me.’  (For this analysis, we define an ‘object’ as anything that is perceived. Hence ‘fear’ is also an object). This in turn implies that I ignored my ‘Dimensionlessness’ (anantatva) and assumed finiteness to myself.

It is true that on the full understanding of the Oneness of “Whatever-That-IS,” there is no scope for any sort of ‘fear.’ After all, if all is One, and there is no second, where and who is the other to be afraid of?

We have a recent real-life example for this in the 35th Pontiff of Sringeri, Shri Abhinava Vidyatheertha Swami. He found a big cobra snake coiled around his neck when he was meditating in a remote forest area. He told his Successor:

“There were no distracting thoughts of any kind. The meditation was deep, with the form quite clear. When I regained consciousness of the body and opened My eyes, I found no trace of sunlight. The place was, however, illumined by the light of the moon. Stars were visible. It was only a few moments later that I realised that there was something on My neck. A big cobra had loosely coiled itself around My neck. Its upraised hood was near My right shoulder, facing away from Me. I had meditated on Bhujaṅga-bhūṣana (an epithet of Śiva meaning, “He who has a snake for an ornament”) and now a snake was on My body as an ornament. Taking this as a sign of the Lord’s grace, I felt very happy. I stroked the cobra gently. It seemed to like this and rested its head against My right cheek. After some time – maybe five minutes – the snake slowly uncoiled itself and went away. I got up and walked down the hill, seeing My way in the light of the moon.

At the base of the hill, I found My attendant waiting with a lamp. This was unprecedented, for, on earlier occasions, I was followed up the hill without any lamp by the attendant on duty. On My way back, in response to My question, he said that after calling him, Acharyal had instructed him to wait for Me, with a lamp in hand, at the base of the hill, after two and a half hours. He had been waiting only for some minutes when I descended. It was obvious to Me that Acharyal had accurately foreseen the time I would be spending on the hill. I also discerned that My second session of meditation, which was totally unplanned, must have lasted for almost an hour.”

Acharyal in the above is a reference to his own Guru, the 34th Pontiff of Sringeri. You can read the full story in the short book published by Sri Vidyatheertha Foundation, Chennai – 600 032, India (available free online at: http://svfonline.net/Yoga-Enlightenment-and-Perfection.pdf )

Non-cognition of an ‘another’ (object, creature etc. including one’s body) happens in the last but one, the Sixth Stage on the Path of Knowledge (jnAna mArga). Actually, we should say ‘non-conceptualization’ rather than non-cognition. That means, even in the awake state, the seeker will be in a deep sleep-like condition with no ‘illusory projection’ of things (padArdha abhAvana). It is also called sasmita samAdhi, amanaska (Null mind) etc.

Hence, if we have certain ‘fears,’ let us honestly admit that we are not there yet. That is the reason why we tend to use conditional expressions like “I know all this is One ……., but ……….” Or “Though I understand Advaita ………, I still feel / experience ………”

Therefore, it behooves on us to examine the issue of ‘fear’ with a finer comb. The questions that need to be looked into are: What is fear? Why is fear? Where was “I” at the moment of the manifestation of fear? Why do I see at all an “other” to be separate from ‘me’?

The good point is that the ‘fear’ has been noticed and a beginning has been made by the seeker to inquire into it rather than s/he being concerned with or be preoccupied in its avoidance or frittering away energies on finding the means to resisting fear.

The human body comes hard-wired with certain phobias for example, Arachnophobia (fear of spiders), Herpetophobia (fear of snakes) etc. So fear is a built-in signaling mechanism in the body for its own protection. The fear triggers the production of adrenaline which is responsible for the ‘fight or flight’ syndrome in the body organs.

The body also comes with necessary mechanisms for its ending (death). So one day it has to anyway end and it hardly matters for the body itself how it dies. But there is a concern for the ‘me,’ the sense of separate self, around which the life of most of us revolves. The ‘me’ is more scared of its own ending and in what form the end comes. So we may say that there are essentially two types of fears: