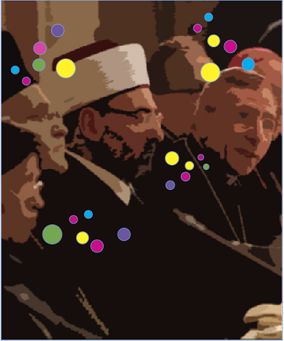 In common with many people in the West who are pursuing a spiritual path, I went down a couple of blind alleys before finding my present teacher, Swamni Atmaprakāśānanda, who had been given the vision of the truth of the Self by her guru, Swami Dayānanda Saraswati.

Of course one doesn’t know that one is going down a blind alley at the time and some alleys are so long that it takes several years before you bang up against the wall beyond which there’s no understanding. This was the case for me. The first alley was long. In the mid 70s, I came across a Philosophy School in London that offered a tantalising and a balanced diet of Upanishad and Gita study, meditation and other practical exercises and disciplines, Sanskrit, fine music, fine food, opportunities for service, regular retreats and the guidance of a ‘realised master’ from India (whom we didn’t personally meet, but received transcripts of his ‘Conversations’ with the founder of he school. These had been translated from Hindi and edited before we got to hear them – and the original recordings erased so no authentication possible). It took several years before discovering that all the right ingredients without an experienced cook will serve up a meal that might satisfy the hungry for a while, but is eventually one that’s lacking in real nourishment. I eventually left to follow my own direction.

The next couple of blind alleys were mercifully short before the signs of a blind alley were recognised: fine words that did not add to understanding; or understanding that came with a price tag of surrender to the teacher; or cult-like, personality-based set-ups. I’d become a bit jaded with the words, words, words. I wanted to experience what I’d been hearing about, and that’s what I told my current teacher when I first met her. She was very sweet and congratulated me on the achievement of having studied to the point of understanding.

‘So everywhere you look you now see the Lord,’ she said.

‘No, not really,’ I confessed.

‘Oh?’ she said, ‘I thought you’d completed the period of study, which means that it has led to understanding that the true nature of yourself is the All.’

I admitted that this wasn’t the case, as far as I could make out.

‘Then maybe we could study together for some more time,’ she said.

And that was when I discovered the power of the sampradāya (traditional teaching methodology). In the earlier philosophy school, verses were picked at random from this upanishad or that and mixed with this other tradition or that. Traditional teaching, by contrast, was systematic and comprehensive and thorough. It used many of the words I’d been previously heard, but handled them in a totally steady, sure, reasonable way that had me exclaiming: ‘Yes’ at every assertion.

Here were the words I thought I was familiar with suddenly shining with fresh meaning. And suddenly more and more pieces started to join up. Behind every word was a mountain of background context. Each word was potent. At his recent Rishikesh study camp on the mahāvākkyas Swami Dayananda underlined the potency of the words of Vedanta when he said, ‘I have two words with which to show you the truth of yourself: prajñāna brahma!’ [Consciousness is Brahman]. Imagine that! In just two words the unity of individual and Absolute Reality can be understood. All that’s needed is to understand precisely what each of those words actually mean.

My first reaction on finding my teacher and meeting her teacher was to scream to all my earlier fellow journeymen: ‘Hey! I’ve found what we all thought we were studying! It’s very different from the way we were taught. Here, at last, is someone who knows what they’re teaching, someone steeped in the tradition. It’s all starting to make sense.’ But all, save a small handful, did not really want to know. And I thought, if these people can’t see the value of this teaching then what of all the ‘Western Advaitins’ who haven’t had the exposure to a single Upanishad, who find Sanskrit one hurdle too many, and being sophisticated Westerners, of course, feel that god is for simple minds? Study and ritual have no role in their journey.

My initial response, therefore, to the material on eclectic websites was rather high-minded: what is the value of publishing anything other than traditional teaching? Surely it gives a platform for ideas that eventually lead down a blind alley. In time, however, this fundamentalist attitude has changed. But there are others who, like me, have discovered the value of the traditional approach and, as was once the case with me, are not convinced that the eclectic nature of this site is the right way to go. They believe that, by offering the same platform to the traditional as well as the non-traditional, one diminishes the former and elevates the latter. To them I would now want to say the following:

1. People are at different stages in their spiritual journeys. And the different expressions of the fundamental principle of advaita meet the different needs. If the goal that the others were pointing towards was not the unity of the individual and the whole then there may be room for a valid objection; but I don’t believe this is the case with Western Advaita. The end that some non-traditional teachers of advaita point to is unity of individual and absolute, but what varies are the means (or lack of them) of knowing this to be the case or precisely what terms like ‘absolute’ or ‘consciousness’ or ‘Self’ exactly mean. And if their students-followers-disciples come to suspect that understand isn’t growing – and if their spirit of enquiry is strong enough – they will start to look elsewhere (as many of us did). One can never tell what route the path of enquiry will take. In my case it went from Catholicism, to agnosticism, to atheism, to rationalism, to the esoteric, to advaita ‘philosophy’, to theism, to mysticism, to traditional advaita. Some of the ‘isms’ were very short lived, barely tasted and let passed but, somehow, I have been fortunate: the flowering and death of each of these approaches appeared to be necessary for the birth and flowering of the one that followed.

2. Just because Newton’s laws of physics have been surpassed as a description of how things are, it does not mean that they are useless: after all, the industrial revolution was based on their understanding. And now the likes of Stephen Hawkins believe that the search for a single unifying law does not mean that the others that have been ‘superseded’ have no relevance or utility. Similarly, Krishna too is open to shower his grace on those who come to him for ‘lesser’ motives like health and wealth, so we can’t afford to be too dismissive of those whose apparent maturity doesn’t meet our ‘exacting’ standards.

3. The varṇa-āśrama system of India (which prescribes different duties for different personal tendencies and also for different stages of development) is beautiful in recognising the variety of each person’s proclivity and providing what’s most appropriate for that mentality and stage of life. The stages that everyone goes through begin with study and preparing for participation in the world, then comes the stage of social interaction and contribution, followed by a stage at which one is no longer drawn to worldly matters and the view turns inwards, till finally one commits fully to the spiritual lifestyle. And this applies whether one is inclined by nature to spirituality, or to intellectual or artistic leadership, or to wealth creation, or to simple service. What is appropriate for a householder just starting out in life and inclined more towards commerce will be different for one who is spiritually inclined and approaching their 50s. The diet for one is different from the diet for the other. No preference or judgement intended here – just common sense. Nothing more than that is what’s happening today with various advaita proponents: their different approaches meet the needs of different people. This Advaita Vision site does a great service by showing who’s who among the teachers and how they relate to the various lineages (http://www.advaita.org.uk/teachers/teachers.htm). This orients a person by giving them a context for the aspect that interests them.

4. Despite Vedanta teaching that an appreciation of advaita [the essential oneness of all] is the final goal of a human life, it still recognised the role of dvaita [dualism] and viśishṭādvaita [qualified non-dualism] as valid stages of understanding. The technical name for this analytical methodology is adhyāropa apavāda [superimposition and negation]. It starts by accepting the superimposition of duality – god and universe and me. It then leads to the appreciation that we are part of one cosmic being – I am an atom in god’s body. And eventually the sense of separation is resolved in recognising that there is only Reality, one without a second – I am That. First we see waves, then we appreciate that the wave is nothing but water in essence and finally we know that all one is seeing is water.

5. If the only person qualified to publish is one who is śrotriya and brahmaniṣṭha, then Swami Dayanandaji should not have been writing or giving talks while still a young student with Swami Chinmayananda. If this restriction had been enforced on him, he might never have met the teachers who finally introduced him to the tradition and from whom he gained the vision. If the only valid teacher of maths is the PhD supervisor then what will the primary school teacher do with their 5 year olds who are just learning to add? If, however, a child prodigy approaches the University Professor with a well-formulated question, then the professor will answer at the level suitable. There are no absolutes in the gross or subtle worlds. The only absolute is Existence-Consciousness Brahman.

Everything prepares the mind for truth. Service does. Prayer does. Yoga discipline does. Meditation does. Study does. But seeing that the problem underlying the ‘human condition’ is based on a misunderstanding of who I am, then the only solution is when the wrong ideas is replaced by right understanding. For anyone to be drawn to the search, for anyone to suspect that everything the world offers isn’t the be-all and end-all of the matter, is a great achievement that need to be applauded and supported