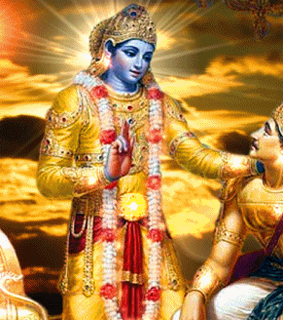 Q: What stops us from knowing this truth of oneself 24/7?
Gita: Mind has three basic defects:
1. it is impure (i.e. it is ruled by appetites and aversions)
2. it is unsteady (i.e. it is unable to hold one thought for any prolonged period of time, let alone forever – i.e. it is NOT capable of being ‘unshakable’)
3. what it holds to be true is erroneous.
Krishna describes this sort of mind of the irresolute as ‘bahu shAkAh anantAh’ – many branched and endless.

Q: How do we start sorting out the problem?
G: Shankara’s commentary on the gItA points out that the first defect that needs to be dealt with is impurity of mind.
• In chapter 2 (and several other places) he says that only way to purify the mind is by living a karma yoga lifestyle – i.e. all actions are dedicated to the Lord and performed without being fixated on results. This produces a mind that is fit for jñAnam [error-free self-knowledge] by being unhooked from the usual drivers of ‘I want’ and ‘I want to avoid’.
• Chapter 6 gives two recommendations for steadying the mind (as does Patanjali): abhyAsa (the practice of returning the mind from wherever it has strayed) and vairagya (dispassion towards enjoyments of the results of actions here and hereafter).
• Chapter 12 is more generous by providing a series of steps for people at different stages of preparedness:
> dwell in the Lord alone. If you can’t do that…
> perform actions with mind intent on the Lord. If you can’t do that…
> steady the mind through abhyAsa yoga. If you can’t do that…
> dedicate the action to the Lord. If you can’t do that…
> Relinquish any fruits that result from actions to the Lord. If you are not yet ready for this…
> Prepare the mind through saguNa brahman meditation combined with…
> Exposing the mind to shAstram [scripture that speaks of the oneness of individual and Absolute] and…
> Practice trying to live a disciplined and ethical lifestyle, based on natural universal values.
These are all preparatory practices to deal with the first two of the above-mentioned impediments.

Q: What are the hallmarks of a karma yoga lifestyle?
G: Two descriptors are given in Chapter 2: ‘samatvam’ (equanimity) and ‘kaushalam’ (discretion). If there is elation on achieving and depression on failing, then this is not equanimity. If one goes against natural universal values, it is not discriminative.

Q: What is the outcome of a karma yoga lifestyle?
G: Chapter 2 indicates where it can ultimately lead when it describes the qualities of the stitha prajnA – the person whose wisdom is steady (verse 55 onwards).
This person has:
1. Satisfaction in the Self alone (55)
2. Composure in the face of pleasure and pain (56)
3. Freedom from the hold of appetites and aversions (57)
4. Mastery over the senses (58-60)
5. Mind intent on the Lord alone (61-68)
This person is:
6 One for whom the Universe is a dream (69)
7 Unaffected by desire (70)
8 Peaceful – without attachment, selfishness and vanity. (71)
9 Not deluded (72).
These qualities are reiterated in Chapter 5, verse 20-25, in relation to the jñAni, the knower of Truth. These people know the difference between Self and not-Self: it’s their daily, steady conviction. They are clear that the Self is not engaged inaction – that it’s only the guNas that act. They are the ones who, when they look out at ‘all this, whatsoever that moves upon the earth’, see only the Lord (re: the first verse of the Iśopaniṣad)

Q: But, how is it possible to act dispassionately given that 90% of actions we perform are initiated from a desire for some result – impelled by the need for security and pleasure?
G: Chapter 3 gives a range of options for how actions can be performed without being motivated solely by one’s own personal desire for pleasure or security:
> As a sacrifice – because that’s how the universe runs anyway, whether one knows it or not.
> As an example to others, like King Janaka and other enlightened monarchs
> For the protection of mankind, like Krishna himself – to prevent people from going astray
> By using faith and reason: if, as the scriptures say, all actions take place as a result of guNas (in the form of senses), interacting with guNas (in the form objects), why cling to the erroneous idea ‘I am the agent’?
> By using devotion: surrender the action to ‘Me’, the Divine. The seed for this is set in Ch2.v47 where Arjuna is told that his ‘adhikAra’ (sphere of authority/choice) lies in the realm of action, but ‘mA phaleshu kadAchana’ – never in the realm of results. The realm of results lies in the hands of the gods and so the actor is NEVER their producer however convincing the connection may appear. Shankara makes this point most clearly in his preamble to Chapter 15 by expressing Krishna’s perspective: “Since I control the fruits of work of those who act and the fruits of the knower’s knowledge, those who devote themselves to Me, conforming to the yoga of devotion, achieve liberation after they transcend the constituents of prakRti through knowledge won by My grace.”
> As a duty to the world and to that which is higher.
And in chapter 4 one more piece of advice is offered: ‘Perform your duty as did the ancient seekers of liberation’: they saw the Lord as the dispenser of the results of action, yet untainted by action and free from hankering for results.

Q: Why is devotion important and to what should one be devoted?
G: Chapter 6 declares the results of withdrawing the mind from all around and concentrating it on the Lord to be tranquillity. The attitude o devotion, if observed not for the sake of a place in heaven but for the sake of enlightenment, is the antidote to the second of the three above-mentioned impediments to enlightenment: mental unsteadiness.
At the very end of the gItA Krishnas sums up his teaching thus: “Set your mind on Me; be My devotee; sacrifice unto Me; prostrate before Me; you will surely attain Me. Truly do I promise thus, for you are dear to Me.” (Ch18v65)
So what is ‘Me’?
‘Me’ is indicated in several places between Chapters 7-12 e.g. ‘I am sapidity in water, the light in the sun and the moon, the humanity in man’, etc (Ch7). Then, later when Arjuna asks in what form the Lord should be worshipped, he is given a new list starting with “I am the Self resident in the hearts of all beings…” (Ch10). The Cosmic vision is seen in Ch 11.
So, together with a karma-yoga lifestyle that loosens the grip of desires, a meditative one brings about stillness. Thus two of the three impediments to self-knowledge are dealt with, rendering the mind fit to deal with the third impediment – erroneous belief in what ‘I’ is – through the meaning of the words of scripture, unfolded by a qualified teacher.

Q: How is the erroneous self-knowledge eradicated?
G: In Chapter 4 (v34) Krishna says that one should totally surrender to the teacher who knows the truth (as Arjuna did right at the start of the dialogue – Ch2v7); by enquiry as to how bondage and liberation come about and what is knowledge and ignorance; and through service to the teacher. And later in the chapter we are told the qualities of the seeker: faith, diligence and mastery over senses.

Q: How does Krishna’s teaching work?
G: In Chapter 5 we learn that as the mind becomes purified and steadied by karma yoga and meditation, it realises ‘naiva kiñcit karomi’ [I do nothing at all] to be the truth of the matter (viveka) – and thus becomes established as a natural renouncer (vairagya). The disciplines of shama, dama, [mastery over mind and senses], etc follow naturally. And the desire for liberation becomes intense –mumutshutva. The person is now qualified for jñAnam {knowledge] starting with shravaNam [study of the words of scripture with the teacher]. Knowledge deals with the erroneous ideas till it eventually eliminates the last remaining error – namely “I am one and God another”. This is reflective of the 2 steps given in the Isha Upanishad:
1. See everything as the Lord (jnAna). If not…
2. Spend 100 years performing duty (karma yoga).

Q: Why is duty important, and what is one’s duty?
G: On one level, the general duties of a householder are covered by the 5 daily worships: to gods, rishis, ancestors, mankind and creatures. Performing these worships accrues no merit, but lack of performance attracts de-merit. (These are taken for granted and thus not specifically mentioned in the gItA).
In Chapter 18 we find mention of duty in relation to the castes (v42-44) and the casts are related to the mix of guNas (re. Shankara’s commentary to Ch18v42). In that sense duty is related to the state of being at the time of action. In the brAhmaNa state of being (ie. sattva followed by rajas and tamas in descending orders of dominance) the 6 duties when dealing with the world are shama, dama, tapas, purity, forbearance, uprightness. And the 3 subtle duties are jnAna, vijnAna and faith in the scriptures/guru. Similarly the duties of the other three casts are spelt out, ending with the only recommended duty for the shudra / tamas-dominant nature, being ‘service’.
If one’s nature is shudra/tamas then trying to practice the duties of the brAhmaNa/sattva will produce no results because the shudra is incapable of taking on the practices demanded of the brAhmaNa. In this way, by the shudra doing another’s duty, his own duty of service – the only way of transcending the shudra/tamas state – is not being performed. Another problem arises from the shudra’s inability to practice the 9 duties of the brAhmaNa – these practices become tainted by a sense of difficulty and failure and thus their later take up is impeded when and if the time is ripe. Hence it is important to determine one’s own state of being and apply the appropriate duty.

Q: What is one’s true caste, especially of those not born as Hindus?
G: Castes should not be seen as birth categories or job categories of individuals, but seen as states of beings. Chapters 14, 17 and 18 give lots of examples of the behaviours related to different states of being – from choice of food to the nature of charitable giving. These are described to allow one to determine one’s dominant characteristic. So maybe one is sattvika in the realm of what one eats, but tamasika in the realm of sacrifice. Duties will vary in both these circumstances.

Q: Any last words?
G: “Again, listen to My ultimate statement, which is the most secret of all. You are definitely beloved to Me, therefore I will tell you what is good.
“Become one whose mind is offered to Me, one whose devotion is to Me, one whose worship is to Me; do salutations to Me. You will reach Me alone I truly promise you, because you are dear to me.
“Giving up all karmas, take refuge in Me alone. I will release you from karma; do not grieve.”
(Ch18v64-66).

Thank you.
G: Pleased to be of help.