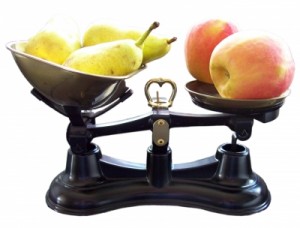 Spiritual seekers should be able to distinguish the essential from inessential in order not to waste time and energy with inessentials on their journey. Hence, the ability to discriminate is basic.

What exactly is it that helps us discriminate? Our senses inform us about the fact that a zebra is something other than a fish. The fact that the feeling of joy is something other than the thought that triggers that joy, is already a more subtle difference. However, both differentiations, indeed any differentiation, is made by using the function in our mind responsible for it, the buddhi.

Unfortunately for most people on a spiritual path many things that do not go together according to the laws of logic are placed on an equal basis. This is solely due to the fact that in our culture religion and spirituality are considered to be incompatible with logic – which means that the buddhi is generally excluded from these areas. In Advaita Vedanta however the buddhi is the most important instrument. Spiritual questions must be answered logically, otherwise they are not considered as having been answered at all. If premises are used then they at least should be identified – in the sense of a working hypothesis – so that the seeker can engage with them or not.

What substantially distinguishes traditional Advaita Vedanta are the many tools that the seeker gets to exercise his ability to discriminate. He wants to discover who he really is – meaning that in the end it is all about discriminating between the eternal and the transient, i.e. between the subject and the objects, i.e. between the Self and the Non-Self. The laws of logic are used to enable the seeker to sort out everything transient (belonging to the world of objects) because all this is the Non-Self. If everything categorised as Non-Self is set aside, what remains is the Self  alone that is recognised as the truth of who one truly is. To get to this point, a longer process is needed in which, with the support of a teacher, one strives to arrive at the Truth.

One of the traditional instruments absent in the Advaita of the West is the differentiation of the so-called levels of reality. Although this instrument is quite easy to apply, it is generally not done in the West. Many misunderstandings are caused by this neglect and important questions remain open.

If in a dream a white elephant carries us on its wings to a tropical paradise, we are quick to dismiss this as unreal. But who determines that it is not real? The one who has woken up. For the dreamer, however, it is absolutely real. We call this form of reality pratibhasika (apparent) reality. Also when we mistake something for something else it is pratibhasa because at the moment when the mistake takes place we are convinced of the correctness of our impression. Pratibhasa is reality based on imagination alone.

The level of reality that most people deem to be real is called vyavahara (empirical). It stands for our world of experience, the phenomenal world that we handle every day when we are awake.

The third reality level is called paramartha (absolute); it describes the highest reality, which is absolutely real and into which both other reality levels can be resolved. (This resolution is not to be understood as dissolution but in the sense that an equation in mathematics can be solved.) So we do not have 3 different realities but 3 different ways of looking at one reality. At this highest level the One, Eternal alone is real, which pervades all that can be experienced and which is its ultimate cause. This vantage point, the paramarthika perspective, can only be taken from the one who has recognized who he truly is– namely one eternal Self. Paramartha can be known, but paramartha is not experiencable (as an object) like vyavahara.

Why is it important to distinguish these three levels? To know at which reality level my lines of thought or experiences take place gives clarity. There are seekers who bend over backwards to always look at everything only from the highest vantage point. This is stressful because it will not work. Besides, it does not detract from the truth in any way to know that that there are different levels of perceiving reality.

The first two levels of reality, pratibhasa and vyavahara, mutually exclude one another in every respect. They cannot co-exist. The very moment I recognise that the glittering something on the ground is not a diamond but only a piece of broken glass, I have overcome the delusion and will not go on falling prey to the idea that it could still be a diamond. Waking up from my dream I, being mature, will not be tempted to search for the additional room which was part of my house in the dream. As definitely as this, with enlightenment, the internal perspective shifts from vyavaharika to paramarthika.

But, externally, vyavahara reality continues to exist, as long as the body goes on. The enlightened one does not disappear from the earth’s surface with enlightenment. He/she has a body and a mind, he goes on thinking, speaking and acting at the vyavahara level of reality; he/she sleeps, goes to the shops, laughs, cries, reads, catches a cold, travels from A to B etc. Looked at from the outside, on the face of it, there is no difference from one who takes the vyavahara for the ultimate reality and knows nothing about paramartha reality. However within himself, both reality levels do not touch, he perceives yyavahara by the mind but his reality is irrevocably paramarthika.

So some seekers strive to view and describe everything from the paramarthika perspective but most seekers have another problem: they cannot distinguish clearly between vyavahara and paramartha – although it is not at all difficult to distinguish both. Everything that presupposes duality or plurality belongs to vyavahara, unless, it is to be assigned to the world of imagination (pratibhasa). Only the non-dual is paramartha.

The scriptures of Vedanta throw light onto our vyavahara reality from the paramarthika perspective. They do this in order to make the seeker gradually realize the relativity of his (vyavahara) reality. Paramartha in itself cannot be put into words, because language is a dual phenomenon, which does not do justice to the non-dual reality. It is possible, however, to indicate paramartha – yet, in actual fact it is only understood once this perspective is really taken. At the very moment when the perspective moves to paramartha, paramartha becomes one’s reality.

Three verses from the Ashtavakra Gita that speak from this vantage point:

Body, the notions of heaven and hell, bondage and freedom, also anxiety – all these are mere imaginations. What purpose have I with all these – I whose nature is Pure Consciousness? 2,20

Wonderful! Marvellous! In Me, the limitless ocean, the waves of individual selves, according to their nature rise, jostle about, play for a time and disappear. 2,25

O! Marvellous! I am really Pure Consciousness. The world is like a magic-show. Hence, how and where can there be any notion of rejection or acceptance in Me? 7,5

From: „Ashtavakra Gita”, translation and commentary by Swami Chinmayananda