The Universe is overwhelmingly empty!

Up in the heavens, galaxies are interspersed by huge empty spaces. Matter constitutes less than one percent of the universe – about one atom in ten cubic meters of space. 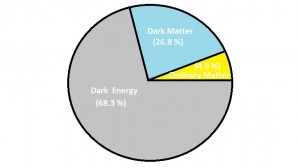 Within an atom too, there is more empty space than substance.  If the atom is magnified to the size of a football stadium, matter (nucleus) in it will be no bigger than a golf ball, the remaining space being just emptiness.  However, many ancient Indian scriptures hold that there is energy aplenty in space.  Physicists unhesitatingly agree.  Evidence for energy in empty space comes both from Cosmology that deals with the astronomical objects of huge proportions and Quantum Physics which studies atomic- and subatomic-sized particles.

Dr. Albert Einstein postulated way back in 1917 the existence of energy in empty space. He said that the energy in space counterbalanced the effect of gravity and provided stability to the universe from collapsing on itself due to gravitational pull. He called it ‘Cosmological Constant.’  However, he withdrew later his postulation as a mistake when Astronomers found that the universe was not actually stable but was expanding. But can the words of a ‘Seer’ like Einstein, if pronounced once  and withdrawn for an apparently flawed reason, go wrong?  For, Dr. A. Resiss and others found in 1998 that the universe was not only expanding, but expanding with an increasing pace.  Astronomers then revived the concept of Cosmological Constant with doubled conviction invoking it as the cause for accelerated expansion of the universe.  Further, satellite studies in 2006 established that about 73 percent of the universe consisted of some invisible energy. (This figure now stands revised to 68.3 percent based on the Planck satellite data  released in 2013).  A comprehensive study in 2007 by Dr. Jesper Sollerman and Dr. Tamara Davis of Copenhagen University convincingly established that Einstein’s Cosmological Constant is this invisible energy.  Quantum Physics provides the raison d’etre for the existence of energy in empty space.

According to Quantum Physics, there is always some probability of an atomic particle appearing anywhere in the universe.  But we can never know exactly for sure whether a particle is at a given place or not.  It means that particles can keep popping up and vanishing everywhere all the time.  Expressed crudely, matter gets created and annihilated everywhere perpetually, particularly when we consider unimaginably small dimensions of time and space (called Planck scales).  Therefore, so called empty space would be actually seething with constant appearance and disappearance of particles at Planck scale dimensions.  As Dr. J.A. Wheeler said: “Empty space is not empty. It is the seat of the most violent physics.”  The violent fluctuations of push-pull give rise to energy to empty space.  All this analysis is not idle speculation.  In 1948 the amount of force that could possibly exist between two parallel plates due to such constant turmoil of particles was predicted.  Fifty years later, technology necessary to verify the prediction in the lab became available.  Laboratory tests confirmed the predicted value.  The force is termed Casimir force, named after the original Dutch discoverer.

But a doubt may arise. Can particles crossover huge amounts of solid matter  to appear in empty space  in the universe?  Yes, says Quantum Physics. Small particles can “appear at one point in space-time and instantly re-appear elsewhere even passing through obstructions.  This very unconventional and logic-boggling behavior is called Tunnel Effect.” Once again, Tunnel Effect is not a fanciful mathematical probability.  Real instruments like Scanning Tunneling Microscopes (STMs) are designed based on Tunneling  Effect!  Thus quantum studies indicate that there can never be a true empty space and quantum fluctuations do impart a measurable force to empty space.

Precision in measurement is the pride of the profession of Physics.  So Physicists went out measuring the energy in empty space.  The measurements by Cosmologists and Quantum Physicists differed by several orders of magnitude.  It is like one calling a thing to be of the size of a grain of sand while the other says it is as big as the Himalayas!  An obvious embarrassment to Physicists.  Prof. L. Krauss thinks it may take several decades to sort out this discrepancy.

Bhagavad-Gita (Ch VIII, Verse 9) describes brahman (Sanskrti root brih to expand) to be smaller than  the smallest, yet forms the substratum for all.  brahman is everywhere including us.  These characteristics of being everywhere and constantly expanding have an astounding resemblance to empty space energy. How is it then we do not feel this energy?  Well, because we can sense things only in contrast to something else.  You cannot see a white article in white light.  You cannot view the ocean if you are a drop of water within it.  Yourself being the very same energy that is around,  you are unable to perceive it.

Astrophysicist B. Haisch and colleagues discovered through their seminal work that matter contains solidity (mass) because of resistance to movement from the invisible energy in space. That means ‘solidity’ to matter is not intrinsic; it is an illusion.  The illusory nature of matter becomes evident if we could ride a beam of light as observers. This concept has not, however, achieved acceptance from the main stream physicists. If we move at the speed of light, Dr. Haisch tells us, “All of space would shrink to a point, and all of time would collapse to an instant, because for a beam of light transmission from its point of origin to any point is instantaneous.”  You will encounter no obstruction, no resistance, no solidity, no substance, no matter at that velocity! It’s just one whole without a gap.  From our perspective, light from the Sun takes 8.5 minutes to reach us.  For photon itself, the moment it originated in the Sun it is with us. There is no separating distance between the Sun and us; it’s all Oneness only.  Is that Oneness “Realization”?  Was it something like a ride on a light beam for those who realized the Supreme Truth?  Dr. Einstein himself said that he arrived at the groundbreaking Theory of Relativity by his imaginary ride over a light beam!

(The above article is  from the Book: Religion Demystified, 2008.  This is the fourth and the last  in this series on Quantum Physics and Vedanta).

1.  Reality ‘Out There’ And Quantum Physics: https://www.advaita-vision.org/reality-out-there-and-quantum-physics/

2.  We are all an entangled web: https://www.advaita-vision.org/we-are-all-an-entangled-web/