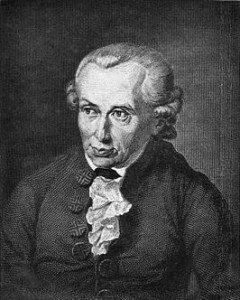 In Part I of this three-part series, I introduced Kant’s work and summarized his views on a priori and a posteriori knowledge. In this second part, we’ll review analytic versus synthetic judgments, clarify the meaning of transcendental idealism as it applies to Kant’s work in general, and also analyze tat tvam asi in terms of Kant’s philosophy.

An analytic judgment is a form of identity relation, and while it explicates, it does not add anything new to our understanding of the object under investigation. A synthetic judgment does. It amplifies our knowledge and does not merely explicate. By the term, “synthetic,” Kant means a synthesis of disparate elements, and not “artificial or fabricated,” as per modern usage.

“In all judgments in which a relation between subject and predicate is thought (I speak of affirmative judgments only, the subsequent application to negative ones being easily made), this relation is possible in two ways. Either the predicate B belongs to the subject A as something which is (covertly) contained in the concept A; or B lies outside the concept A, through connected with it. In the former case I call the judgment analytic, in the latter synthetic.” CPR, p. 43, (B11)

An example Kant uses here is the judgment that all bodies are extended. The concept of spatial extension is already there inherent in the concept body, and there is no need to look beyond what is already known a priori. So this judgment is analytic. It explicates but does not amplify our knowledge. But if we say that all bodies are heavy, Kant’s point is that “the predicate is something quite different from what I think in the mere concept of a body in general.” This makes the judgment synthetic rather than analytic. Kant notes that all empirical judgments are synthetic.

Bringing in our discussion above on a priori versus a posteriori knowledge, we can say that the judgment “all bodies are heavy” is a synthetic a posteriori proposition. It requires empirical experience of different bodies to understand heaviness, so we are adding the new predicate to the existing concept of a spatially extended body (which we already knew a priori). The inclusion of a predicate not contained in the concept being evaluated makes the judgment synthetic rather than analytic. We can generally say that analytic judgments are made on the basis of a priori knowledge, while synthetic judgments are made on the basis of a posteriori combined with a priori knowledge.

Or can we? We are now in a position to ask the key question surfaced by Kant, the problem that turned philosophy on its head.

“Now the real problem of pure reason is contained in the question: How are synthetic judgments a priori possible?” (CPR, p. 49, B20)

Kant is referring here to judgments that are not based on a synthesis of a priori knowledge with empirical experience, but rather judgments that have no a posteriori component at all, yet still amplify our knowledge. An example used by Kant is, “Everything that happens has its cause.” The new predicate in this judgment – having a cause – is not already contained within the concept of an event or happening. So the judgment is therefore synthetic and not analytic, ampliative rather than explicative. Yet very importantly, this judgment is a priori, based as it is on “necessity and strict universality” — the key elements of a priori judgments. In other words, this is not a generalization from previous experience through inductive reasoning. According to Kant, we know beforehand that every event must have a cause. We apply this a priori knowledge to what we see experientially.

Another illustration of synthetic a priori judgments is mathematical: 7 + 5 = 12. At first glance, we might think this is an analytic proposition, an identity relation. Yet Kant’s view is more subtle than this. The concept “twelve” is not contained within the concept of union between 7 and 5. We require intuition in order to understand the truth of this proposition. We also have to agree that 7 + 5 = 12 is a necessary proposition to which there can be no empirical exceptions. So the judgment 7 + 5 = 12 is an arithmetical proposition that is both a priori and synthetic. In Kant’s view, mathematical propositions are all synthetic a priori. We arrive at these special judgments without relying on the senses or empirical experience.

Now that we have a clearer understanding of the difference between analytic and synthetic judgments, and have also examined Kant’s idea of synthetic judgments that are a priori in nature, how can we apply this understanding to Advaita? I would assert that the mahAvAkya proposition given in the Chandogya Upanishad – tat tvam asi (That thou art) – satisfies Kant’s conditions for a synthetic a priori judgment. This proposition is certainly synthetic in nature, for it does amplify rather than merely explicate. The new predicate – That – is compared to the original thou – to point toward the new understanding that there is no difference between thou and That, Atman and Brahman. Yet this is not an empirical judgment either, since it not based on anything we could possibly observe through the senses. The knowledge in question is necessary and universal, exclusively a priori rather than a posteriori or a mix of the two. So we have in one of the earliest of the Upanishads a straightforward statement of a synthetic a priori proposition.

Supplied with the above analysis, we can see how Kant’s critique may have relevance to the long-standing “experience versus knowledge” argument, which runs through Advaita discussions like the Great Rift Valley. I refer to the view that mokSha can only be validated if the jIva has achieved certain experiences, such as nirvikalpa samAdhi, or the complete cessation of mind, and that in the absence of such confirming experiences, their Self-Knowledge is merely intellectual or theoretical and therefore falls short of true Liberation. Yet if we apply Kant’s approach, we can immediately see a potential defect in this line of argument.

All experiences, whether mundane or spiritual, including samAdhi, are by definition empirical and therefore a posteriori. They are empirical because they begin and end in time. We can certainly form all kinds of synthetic judgments based on such experiences, but these are not synthetic a priori judgments because they do involve an empirical component. What we are looking for, according to Kant’s terminology, is a pure a priori judgment that is also synthetic. In Advaita, we find this in tat tvam asi, knowledge that is both a priori and synthetic, not merely analytic. We may find confirmation of this proposition through empirical experiences, but the Knowledge itself is prior to any input from our sensory apparatus.

As if it were not difficult enough at times to parse Kant’s meaning, we must pay clear attention when reading him in English translation that the words transcendent and transcendental carry completely different meanings, nearly opposite to one another. Kant defines the term transcendental to refer to knowledge not of objects per se, but rather to our mode of cognition of objects, to the extent this is possible a priori.

So it is important to note that Kant does not mean by this word transcendental something that passes beyond (i.e., transcends) experience, but rather something that precedes experience, and is intended to make it possible for us to actually cognize experience at all. By contrast, Kant is dismissive of the view that we can have any knowledge which transcends experience, that is, knowledge which is transcendent. We touched above on Kant’s position that it is impossible for us to know objects directly. According to him, we cannot ever know the thing-in-itself. If we could know objects in themselves, as many other philosophers before Kant have argued, then we would call this knowledge transcendent. Kant goes on to offer various proofs that transcendent knowledge is impossible.

Overall, we can refer to Kant’s work as transcendental idealism:

In considering the relevance of Kant’s transcendental idealism to Advaita Vedanta, we can begin by noting that the opposing view of transcendental realism implies that empirical experiences are satya rather than mithyA. In contrast, Kant says that “appearances are regarded as mere representations,” which seems quite consistent with describing appearances as mithyA. And to say that space and time are “only sensible forms of our intuition” is also consistent with describing space and time as mithyA. Kant’s position, therefore, translated to Advaita terms, is that space and time are only valid in the context of transactional (vyAvahArika) reality, and therefore not truly Real (pAramArthika).

In Part III to follow, we’ll have a closer look at Kant’s views on space and time, and investigate whether there is any substantive difference between the Advaita concept of Atman (Self) and Kant’s transcendental synthetic unity of apperception.

44 thoughts on “The Relevance of Kant’s Transcendental Idealism to Advaita Vedanta, Part II”