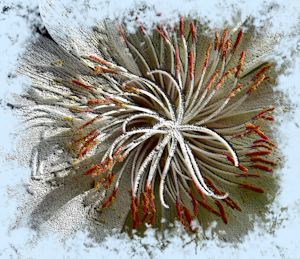 Most seekers who have investigated the teaching of Ramana to even a small extent will be aware of the concept of manonAsha. This is often presented as the idea that enlightenment is synonymous with the ‘death of the mind’. And indeed this is its literal meaning. Consequently, some writers claim that, following enlightenment, the j~nAnI literally no longer has a mind. This goes along with similar ideas such as that, for the j~nAnI, the world literally no longer exists.

This way of thinking is unfortunate. Shankara himself emphasised that we should not discount either our experience or reason, when it comes to interpreting the scriptures. And, speaking for myself, whenever I have encountered writings on Advaita which significantly contradicted my perception of what seemed to be ‘reasonable’, they have always proved to be misguided or incomplete, if not plain wrong.

And so it is in this case. Reason tells us that a j~nAnI would not be able to operate – move, eat, speak and so on – without a mind. There would be no motivation to do so either. And since there are no others, and no world, why and how would he teach? This is the reductio ad absurdum argument but, if we allow this (and of course the adherents of the mistaken view do not), then how can we understand the concept? What exactly can Ramana have meant when he used the term?

Ramana is perfectly well aware that, from the standpoint of absolute reality, there is only Brahman. So there cannot be a mind (or body). Therefore the mind cannot be destroyed, since it never really existed to begin with. Despite this awareness, Ramana still uses the word manonAsha, so he must necessarily be speaking from the standpoint of empirical reality – our everyday experience of the world-appearance. But even here it cannot be taken literally.

At the level of paramArtha (absolute reality), it is the Atman that is actionless, not the body-mind. If we are attempting to speak at the pAramArthika level, then all we can say is that there is only Brahman. (Even that is saying too much!) And at the vyAvahArika level, even the enlightened have minds, walk and talk. Anyone who claims otherwise is misrepresenting the fundamentals of Advaita. Everyone is really Consciousness functioning through the reflecting medium of the mind. The simple difference between a j~nAnI and an aj~nAnI is that the j~nAnI knows this to be so. Outwardly, they remain the same, from the point of view of either.

A ratification of this point of view can be found by looking at the Bhagavad Gita: The balanced person who knows the truth thinks: ‘I do nothing at all; it is only the senses relating to their sense objects,’ even whilst seeing, hearing, touching, smelling, eating, going, sleeping, breathing, speaking, excreting or grasping; even just opening or closing the eyes (chapter 5, verses 8-9).

Anyone who has read my ‘Book of One’ may recall that this is one of my favorite quotations, brought to mind especially when cycling up hills! I go on to say: “The Self is that which is behind everything but itself does nothing. The Kena Upanishad speaks of it at length: ‘By whom commanded and directed does the mind go towards its objects? Commanded by whom does the life force, the first cause move? At whose will do men utter speech? Which power directs the eye and the ear? It is the ear of the ear, the mind of the mind, the speech of the speech, the life of the life, the eye of the eye. … There the eye does not go, nor speech, nor mind. We do not know That; we do not understand how it can be taught. It is distinct from the known and also It is beyond the unknown.’ (Ref. 1)

“The Self is the reality behind all appearances, itself unknowable. It does nothing, but all apparent activity takes place through its power and against its background. We are the Consciousness, which, by virtue of this body-mind instrument, is capable of seeing, hearing, speaking etc. The body-mind sees, hears, speaks and acts but ‘we’ do not. Everything takes place within this awareness; but the awareness itself, which is what we truly are, is beyond all movement, beyond space and time.” (Ref. 6)

Despite all of this ‘doing’ that seems to be taking place, the j~nAnI knows that he is the Self, who is not doing anything. He knows that the body carries on ‘doing’, even if only breathing and circulating the blood. But he has the knowledge that ‘I am not the body or mind’; ‘I am that by virtue of which they are able to function’. The identification – ahaMkAra – has been ‘destroyed’ as a result of Self-knowledge.

‘Who-we-really are’ is the Self, Consciousness or Brahman. There is no such thing as a body or mind in reality and the ‘I’ does nothing. There are only the ever changing forms, whose substratum is always Brahman only. And the key difference between the realized man and the ‘ordinary person’ is that the former knows this to be so. He knows that ‘(in reality) I do nothing at all’ and, to return to the topic of this article, ‘(in reality) my mind has no absolute existence: without consciousness, it is as good as dead.’ It is alright to leave out those repeated phrases in brackets… but only so long as you understand what is being said.

In the Gita (II.54), the first question which Arjuna asks of Krishna is to describe to him how an enlightened person behaves. (Such a person he calls a sthitapraj~na – a man of ‘steady wisdom’ or firm knowledge; one whose mind remains established in the Self – samAdhisthasya. Shankara clarifies that sthita means ‘well-established’ and praj~na is the knowledge relating to the ability to discriminate between Atma and anAtma.) Krishna spends the rest of the chapter (II.55 – 72) answering the question. His first statement (II.55) points directly to the key element of this problem. He says that the enlightened person is one who ignores, or is not in any way distracted by those desires which arise in the mind (manogata). I.e. such a person still has desires and, more specifically germane to this article, he or she also has a mind in which those desires arise. The desire of Krishna, for example, was to relieve Arjuna of his angst on the battlefield.

So the realized person still has desires but, as they arise in his mind, he is no longer attached to them and is able to let them go without their distracting him. Whereas the ordinary person relies upon the satisfaction of desires for his happiness, the realized man knows he is already complete and unlimited, no longer dependent upon acquisition of worldly things and the like for what could only ever be temporary satisfaction. The ordinary person can be said to be ‘bound’ by his desires and, if thwarted, they give rise to anger, delusion and ultimate destruction (II.62 – 63). On the other hand, the ‘actions’ of a realized person, who knows that he does not act, are non-binding.

It is attachment to external things, thinking that one is a doer and an enjoyer, which leads to desire and its dire consequences. This, in turn, is due to ignorance of one’s true nature. Knowing that one is everything, how could there be desire to attain anything? Accordingly, what we need to do is to negate all of these wrong ideas. What destroys ignorance is Self-knowledge; we need to investigate the Self, via the unfolding of the scriptures through the skills of a qualified teacher. At its successful conclusion when the realization dawns, the mind (in the sense of the dominion of wrong ideas) is effectively destroyed. More specifically, it is the ‘I notion’ – ‘I am this body’, ‘I am a teacher’, etc which goes. The ahaMkAra resolves into the truth of itself – sat-chit-Ananda, limitless existence-consciousness. Attachment ceases; desire no longer unbalances the mind. This, I suggest, is what is meant by the term manonAsha.

II.65 states that ‘in tranquility’ (i.e. at the dawn of enlightenment), all sorrows are destroyed. The word used here is hAniH, nominative singular of the feminine noun hAni, meaning ‘destruction’ or ‘injury’ (Ref. 2). Destroy the ignorance and the attachments, realize that I am not a doer or enjoyer, and the sorrows, too, are destroyed.

Swami Dayananda says, commenting on this verse: “…the mind of a person with self-knowledge stays. And because the knowledge stays, the mind no longer causes any problem. The knowledge stays because there is nothing to oppose or inhibit it. The mind of such a person becomes a useful instrument. Because the mind is tranquil, it no longer causes trouble.” (Ref. 3) The mind, though still very much present, is now an instrument rather than a controlling force. The dominion of the attachments and aversions (raga-dveSha-s) has been forever destroyed. As II.71 says: “That man who, giving up all attachments, moves about desirelessly, without owning anything, and without egoism ­– he goes to peace.” (Ref. 4)

Shankara elaborates on this: “That man of renunciation who, entirely abandoning all desires, goes through life contented with the bare necessities of life, who regards not as his even those things which are needed for mere bodily existence, who is not vain of his knowledge – such a man-of-steady-knowledge, who knows Brahman, attains peace, the end of all the misery of mundane existence. In short, he becomes Brahman.” (Ref. 5)

manonAsha, then, refers to the figurative death of the ahaMkAra, the ‘I thought’ that identifies with body and mind etc (‘figurative’ because there is not actually anything to die in reality). It is ‘death’ in the sense that this mistaken idea is dissolved as a result of gaining Self-knowledge. But it is a metaphorical death only. Rather, it should be said that the mind ‘resolves’ into Atman. Nothing actually changes, just as the appearance of the wave does not change once we realize that it is only water. The mistaken idea (that I am the body-mind) was in the mind and the Self-knowledge is also in the mind. This is the meaning of ‘enlightenment’: the event in time when the mind realizes that we are already free.

1 thought on “manonAsha – not the literal death of the mind”