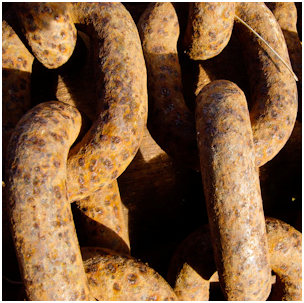 Also, prior to this, I had encountered the concept of the self or Atman living in the ‘cave of the heart’. This is an ambiguous and unhelpful phrase, if ever I heard one! If you read my review on the Mundaka Upanishad, you will have seen that I addressed this particular concept. As far as the literal idea is concerned, it is the vishiShTAdvaitins who believe this. They claim that the jIvAtman is aNu parimANa – atomic in size, as opposed to vibhU parimANa – all pervasive. (Note that the word parimANa should not be confused with pariNAma, meaning ‘transformation’, or pramANa, meaning source of knowledge!) Their idea is that the jIvAtman is minute and occupies a tiny space in the body, with its attribute of consciousness somehow radiating out to all parts of the body. There are many jIvAtman-s and only one paramAtman. Needless to say, these ideas are systematically refuted by Vyasa and Shankara.

To return to the concept of the knot, Ramana himself does not actually seem to mention this complete phrase very much. The one place I was able to find it was in ‘Reality in 40 verses’: “Wise men say that there is a connection between the source of the various psychic nerves and the Self, that this is the knot of the heart, that the connection between the sentient and the insentient will exist until this is cut asunder with the aid of true knowledge, that just as the subtle and invisible force of electricity travels through wires and does many wonderful things, so the Force of the Self also travels through the psychic nerves and pervading the entire body, imparts sentience to the senses, and that if this knot is cut the Self will remain as it always is without any attributes.”

He does, however, speak of the heart itself in many places. And I also noted in browsing that many of these relate to Yoga philosophy rather than advaita. For example, he speaks of nadi-s, chakra-s, and kuNDalinI in a number of places. It is not that Ramana himself confuses the philosophies – he often prefaces such statements with e.g. ‘the yogis say’ or ‘the yoga marga says’ – but it is certainly possible that some of those who profess to follow Ramana may get confused! Yoga is a dualistic philosophy and, although Advaita accepts some of its preparatory practical instruction, it does not agree with the conclusions. And I did not find the above description very helpful either!

The Sanskrit term for ‘knot of the heart’ is hRRidaya granthi. Ramana explains in ‘Talks with Sri Ramana Maharshi’ (extract 97): “the heart is not physical; it is spiritual. hRRidayam = hRRit + ayam = This is the center. It is that from which thoughts arise, on which they subsist and where they are resolved. The thoughts are the content of the mind and they shape the universe. The heart is the centre of all.”

And in extract 29, he says: “The heart need not be taken to be the muscular cavity with four chambers which propels blood. There are indeed passages which support the view… that is used in the Vedas and the scriptures to denote the place whence the notion ‘I’ springs. Does it spring only from the fleshy ball? It springs within us somewhere right in the middle of our being. The ‘I’ has no location. Everything is the self. There is nothing about that. So the heart must be said to be the entire body of ourselves and the entire universe, conceived as ‘I’. But to help the practicer we have to indicate a definite part of the universe, or of the body. So this heart is pointed out as the seat of the self. But in truth we are everywhere, we are all that is, and there is nothing else.” This is more like it!

There are actually a surprising number of references to this term in the scriptures. Here are a few of them:

When the knot of the heart, ignorance, has been thoroughly removed, how could the senses be the cause of the mind being directed outwards for some-one who does not want them? (vivekachUDAmaNi v. 423 or 4)

When all the knots of the heart are destroyed, even while a man is alive, then a mortal becomes immortal. This much alone is the instruction (of all the Upanishads). (Katha U. II. iii. 15, Swami Gambhirananda)

The conception ‘I am the body’ is spoken of as the knot of the heart, as non-wisdom, as the state of Asat, as nescience, as the dual, as the true jIva and as with parts, is certainly the great sin and is the disease generated by the fault of thirst after desires. (Tejo Bindu U. 91-96)

The supreme being is knowledge alone – so a mortal becomes immortal only by vision of Brahman. When the Great beyond is seen, the knot of the heart snaps, all doubts are smashed and all (worldly) actions die away. (Maha U. 81-2)

The knot of the heart is split; all doubts are cut asunder. All his actions dwindle when He, who is both here and beyond, is seen. (Annapurna U. IV-31)

But probably the most well-known reference is the Mundaka Upanishad (II.ii.8) (The same verse also appears in one of the works attributed to Shankara – dRRigdRRishya-viveka, verse 31):

Swami Nikhilananda translates the DDV verse as “By beholding Him who is high and low, the fetters of the heart are broken, all doubts are solved and all his karma-s (activities and their effects) wear away.” Swami Chinmayananda, in his MU translation has: “When he has seen both the higher and lower, the knot of his heart becomes untied; all doubts are solved; and his karma is consumed.”

(Interestingly, Raphael puts it the other way round – first the knot is broken and then you see the ‘higher and lower’: “When the chains of desire have been shattered, all doubts dispelled, all kinds of karma dissolved, ‘That’, which is both above and below [transcendent and immanent], is realized.”)

The plain fact of the matter is that it is self-ignorance which prevents us from seeing parAvara – far and near, high and low, earlier and later, cause and effect. So, in essence, the ‘knot of the heart’ is ignorance and the key to untying this knot is the self-knowledge gained from shAstra and guru.

But, if we examine the nature of this ‘knot of ignorance’, we do find that it does have something to do with emotions after all. Ignorance (avidyA) causes us to identify ourselves (Atma) with the body. The ignorance stimulates desire (kAma) for things to satisfy our presumed lack and this, in turn, brings about action (karma) to obtain those things. (And failure to get them causes anger (krodha) and so on… to delusion and death, as the Gita points out!)

It is these three factors – avidyA, kAma and karma – which constitute the ‘knot’ which has to be untied. And, as anyone who has attempted to untie a knot knows, it is essential to pull on the correct strand if one is to succeed. If you pull the wrong one, it gets tighter! Alternatively, Swami Dayananda (in his Gita Home Study Course) sees the knotted ‘rope’ as four-stranded: “dharma, artha, karma and mokSha are the four strands hanging from the tangled ball of saMsAra. If you pull on the first three, you are tightening the knots. Pursuing artha and karma only creates further problems and though dharma resolves the problems to an extent, it does not untie the fundamental knot, hRRidaya granthi. For that you have to remove avidyA.”

So, avidyA being the root cause of the problem (leading to the sequence of ‘events’ known as saMsAra – the eternal round of birth and death), it is avidyA that must be tackled. No amount of action will ever remove ignorance because action is not opposed to ignorance. What is needed is Self-knowledge. And Swami Dayananda specifically translates hRRidaya grantha in his Mundaka commentary as ‘knot of ignorance’ and not ‘knot of the heart’!

1 thought on “Knot of the Heart”