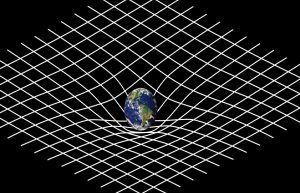 Hardly does a minute go by when a student of Advaita does not hear an analogy. The subject being so abstruse and abstract, the teacher ostensibly to make things easy to understand (सुख बोधाय), resorts to the method of using an “analogy.” Much like in Theoretical Physics and Quantum Physics, the concepts in Advaita too are usually counterintuitive and metaphor is a powerful tool to help drive home a difficult idea. The danger in using the metaphor is that it, more often than not, lulls the student with a sense as though s/he “got” it (the Oneness of All That-IS).  Perhaps because of that, it is not seldom that we find even an advanced student of Advaita being tempted to extend a metaphor beyond the intended point and make his/her own inferences from such a wrong projection. (I am frequently asked questions on ‘reflected Consciousness,’  ‘Witness-Consciousness’ etc. based on such improper extensions).

No wonder that Physicists (particularly those in Science Communication) are concerned about the “use of metaphor” and the “understanding” it provides. Recently, I found the problem best articulated by  Philip Freeman, a teacher of Physics. He has some interest in Philosophy also. He lives near Vancouver BC, Canada. I am copying from his reply to a question at Quora regarding the limitations of analogies.

“[W]e’re lazy. Your brain is lazy… it doesn’t really care about understanding things (most of the time), it just wants enough of a handle on them to feel comfortable. And the people explaining things to you are lazy too, they don’t want to try to teach you the messy, tricky, complicated you-really-need-the-math-to-work-with-this stuff. And they know that given your brain’s reluctance to work harder than it has to you probably wouldn’t stick around for that anyway.

So they give your brain what it wants — the illusion of understanding. Something to make the strange seem familiar so you have a mental drawer to file it in and can stop feeling that annoying “I don’t know what this means” feeling. They give you an analogy.

But analogies are also dangerous because they are inherently wrong. I don’t know how many times a student of mine has come to me in confusion about some point and I’ve realized that it is all my fault because I used a poor analogy, or left it without proper boundaries, so the student over-extended it. I don’t know how many questions on quora come from that same place. It’s a lot. It includes this one.

You see when someone says spacetime is ‘bent’ or ‘ripples’ they are using a convenient analogy. They really want to talk about curvature, or wave propagation… but those are very abstract ideas. So they turn to a simple thing that has curvature (more or less) and can carry waves (also more or less)… a surface like that of a flexible fabric / rubber sheet.

Now, most of the behaviors you will see on those surfaces are not really the ones that are relevant to what they are talking about. The path of a ball rolling on a sheet with a mass on it doesn’t bend because of curvature as it should if the analogy was any good, but it bends and your brain will be satisfied. The ‘ripples’ on a sheet are not actually the right sort of ripples and have little to do with the actual metric distortions of a gravitational wave. But they move like waves do, and sort-of-kind-of look right, and that’s enough for your brain to feel happy. So you feel happy. So they feel happy (and maybe get your like or upvote or book purchase or whatever).

Only you don’t really understand, you just have the illusion of understanding. And, if you are the sort who really does want to understand, then you are going to push the analogy and try to use it to understand more deeply. And the lie implicit in the poor analogy will rise up and bite you and you’ll end up wondering if, say, spacetime can rip. Given the model that’s been passed off on you that’s a prefectly reasonable thing to wonder. Only… everything you know is a lie. About spacetime I mean. Well, probably everything else too, but that’s another story!”

Mark Philip’s words – “The brain just wants enough of a handle to feel comfortable”;  “The Analogy give(s) your brain what it wants — the illusion of understanding”; “Analogies are inherently wrong.”

Those are words that Advaitins too should always remember.

So don’t be carried away by the snake in the rope or the water in the mirage.

2 thoughts on “On Analogy”